This month’s FYA Book Club selection is All American Boys by Jason Reynolds and Brendan Kiely. Check out the discussion questions below! (Slight spoilers ahead.)

What was the racial make-up of your high school and/or your community when you were a teenager? Did you ever witness or experience any tensions along racial lines?

1. How did your feelings towards Rashad and Quinn change throughout the story, if at all?

2. Did you find Quinn’s initial response understandable, even if you didn’t agree with it? Why or why not? As the days progressed and he wrestled with how to react and what to do, did you find that development to be authentic?

3. Rashad’s father and brother obviously have different views about how to move forward after Rashad’s beating. Did you empathize with both of them? And did your opinion change when you found out about the boy that Mr. Butler shot?

4. Was there any moment in the book when you found Paul Galluzzo to be a sympathetic character? Why or why not?

5. Do you think that the authors were successful at exploring issues like police brutality and racial profiling in a way that made them personal and realistically complicated, or did this book feel like an after school special?

6. Jason Reynolds and Brendan Kiely became friends while traveling together on a book tour. During that time, George Zimmerman was acquitted of the murder of Trayvon Martin, which sparked a lot of discussions about race between the two writers. This book is a result of those conversations and their friendship. Do you have a friend or a colleague who has offered you a different perspective, and/or whom you can have a dialogue with about important yet “hot button” topics?

7. Have you ever participated in a protest or demonstration? If not, did this book encourage you to do so? 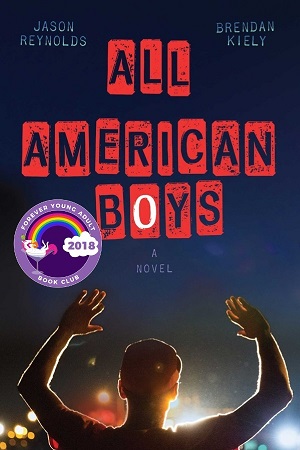