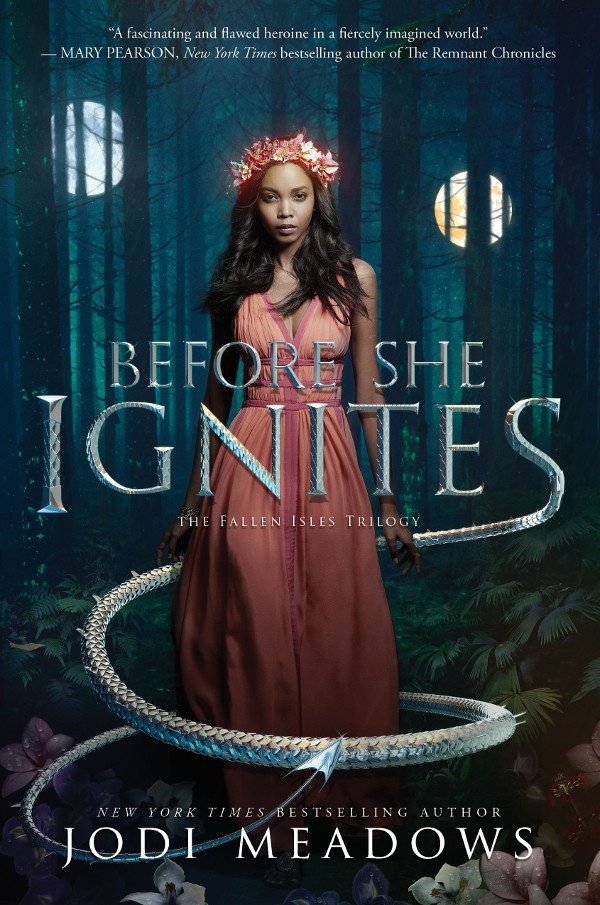 Title: Before She Ignites (Fallen Isles #1)

Ah, Fancy Dress—I honestly haven’t missed you. But I do have to applaud this cover for having a non-white woman in said fancy dress and adding intrigue with the “tail” of the S being all metallic and scaly. (I’m not the only one who thought for a second that it was the woman’s tail, am I?)

Also, the fancy dress is actually appropriate for the book this time, not just random. Just in case you were wondering.

For her entire life, Mira’s been the face of her island nation, the Hopebringer, born on the same day as a treaty that changed everything—most think for the better. She’s been raised to look pretty and say pretty things, to do what her (overbearing) mother says, and to believe wholeheartedly in the truth behind the treaty. Her one escape is working with dragons, and even that’s not something her mother totally approves of.

When Mira and her two best friends discover that some of their beloved dragons are missing, they investigate and tell the authorities what they find. But the authorities don’t like being questioned, and Mira quickly finds herself in the Pit, a deadly prison.

For much of the book, I was frustrated by Mira’s self-depreciation and vanity. But then I thought about what I’d learned about her upbringing and realized that it wasn’t really her fault she was the way she was and that she was trying to be better. Her family life was terrible; her mother abusive and demeaning. Mira can’t help but think she’s nothing but a pretty face—and stress when that face isn’t as pretty as it used to be—when that’s all she’s known herself to be. She certainly grows by the end of Before She Ignites, but there’s still a hard road ahead for her, poor girl. I wish I could have been there to tell her she’s worthy and valid and smart, screw what she’s been led to believe.

When she gets to the Pit, Mira tries her best to make connections with her fellow inmates. She’s been raised to be friendly and believes strongly in the importance of brotherly love, but not everyone feels the same. And Mira’s prejudices against people from the other islands (there are seven, each with different cultural attributes) leads her to mistrust the kindness of her nearest neighbor, a quiet young man who wants to be her ally. But she finds herself getting attached, regardless, and though there’s not much in the way of swoon in this series starter, there’s chemistry and promise that more might be coming in future books.

Before She Ignites is a book that relies heavily on the standards of the YA fantasy genre. Meadows’ world-building is good if a little sparse—I want to know more about the Fallen Isles and its various cultures! Why is the mainland so separate, yet so menacing? Tell me more about the dragons!—and I hope it’s fleshed out more in subsequent books. The characters, other than Mira, aren’t too detailed, and even she felt really tropey at first. (But most of them aren’t white! Yay!) I understand that it’s hard to get to know people when you’re in prison, especially when they’re reticent to chat, but I could have used a little more background information. That said, there’s a lot of promise in the book, and I’m really looking forward to revisiting the world and the people in it.

Mira is a Dragon Girl, the way people are Horse Girls. She loves everything about them, knows everything about them, and has a large collection of miniature dragons. Her favorite thing to do is hang out with “her” dragon, Lala, in the dragon sanctuary, and help look after the other dragons that live there. I get it, having been (/still being) a Unicorn Girl myself.

For anyone who’s ever dealt with anxiety or panic attacks, it’s obviously not a bonus factor. But the fact that Meadows created a main character who has severe anxiety and experiences panic attacks is a bit of a breath of fresh air in a YA novel. Mira struggles, mightily, to keep her brain in check, and I could physically feel her anguish at times, having had similar experiences myself. In addition, Mira has a counting compulsion that helps with her anxiety, and certain characters in her life try to reassure her that it’s OK to do it (while others tell her to keep it a secret at all costs …). Mental illness is a fact of a lot of people’s lives, and it’s nice to see it portrayed so realistically in a YA book.

Mira’s mother is a total Dan Scott. Not only does she make her daughter feel worthless and stupid, but she’s made Mira believe that her beauty is her only redeeming quality. Mira’s constantly dwelling on what her mother would think or her mother would say, and it’s always crappy or abusive. I hate the woman with a passion.

I didn’t completely fall for you, Book, but there’s a spark between us that I’m willing and interested to explore further. Tracy Banghart’s novelalso features a “soft” girl finding her way out of a tricky prison situation.

Sara Wolf’s series is about a young woman trying to escape a different sort of prison.

FTC Full Disclosure: I received a copy of this book from Katherine Tegen Books, but got neither a private dance party with Tom Hiddleston nor money in exchange for this review. Before She Ignites is available now.