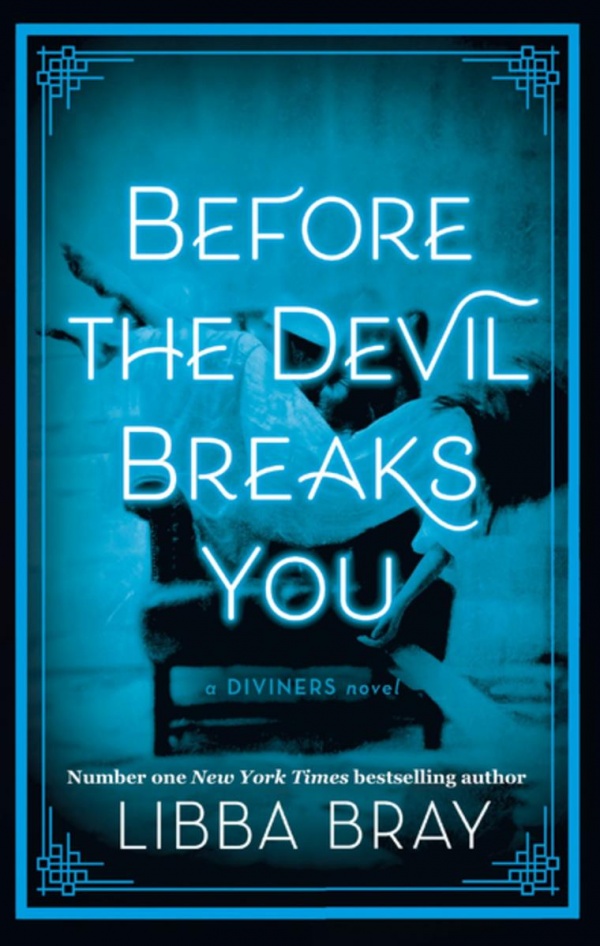 Title: Before the Devil Breaks You (The Diviners #3)

Cover Story: Another Day, Another Design

Talk to me, cover designers and marketing team. Tell me why the third book in the series has another completely different cover theme. Are you going to do this for Book 4, too? Have you no mercy for those of us with an obsessive need for covers to match? (Yes, I saw that the other books have new covers, too…but my copy of Lair of Dreams is signed. *twitch* *twitch*)

As for this specific cover…well, I like it when it’s placed next to its new purple and lime green brethren (these are all the colors of my living room rug), but I don’t like like it. We’re not going steady—I might go to a movie with it in a group date, but if it starts fake-yawning to put its arm around me, I’m getting up for a bathroom break. The levitating girl is creepy; I like the font and the art-deco flourishes on the side…but altogether, it looks pretty generic. This story deserves better!

Warning: here there be spoilers for books 1 and 2 of the series! If you haven’t read The Diviners and Lair of Dreams, proceed with caution.

The newly-expanded gang is back together after everything that happened in Lair of Dreams, and things are…not going well. After they battled the creepy-AF sleeping sickness that nearly claimed Ling and Henry, they found out that there is a US Department of Paranormal Investigations which investigates the supernatural, and may rely on Diviners for help. Sam’s mother Miriam, likely a Diviner herself, is being held hostage. Meanwhile, Blind Bill is trying to steal Isaiah and Memphis’ powers, Jericho’s health serum is being held hostage by Jake Marlowe, the museum is probably going to have to close, Theta’s past is catching up with her, oh, and the King of Crows is still lurking out there.

Now, as if that weren’t enough, there is an influx of ghosts haunting an insane asylum (talk about low-hanging fruit, ghosts—way to target people who already won’t be believed!). The King of Crows is ramping up an army of angry spirits, ready to help him execute his Manifest Destiny of the Dead. The American public’s opinion of the Diviners is dropping in favor of some of that old-time religion. Meanwhile, anarchists aren’t above using violence to get things done where labor unions fail, and Mabel is caught up in the excitement. The American land of plenty is haunted by the misdeeds of its conquerors, and the King of Crows is out for blood. Is there any way the Diviners can ward him off and save the innocent? Is anyone innocent?

Everybody in the main cast gets a BFF charm this time around—even Evie, who is maturing at a breakneck pace for someone so initially self-absorbed. It takes a lot of skill to make so many characters with such different personalities both flawed and likeable. Libba does it with style. My jealousy of her talent wars with my delight in getting to live in this world and be (imaginary) besties with the crew.

HOLY HOTNESS. To put it bluntly, several of our favorite characters get laid in this installment, and not a moment too soon! (Always use protection, kids: against STIs and pregnancies, but also leering ghosts out to ruin your good time.) While it’s not graphic (don’t worry, teen librarians and buyers-of-books-for-teens), it is very clear that s-e-x is happening.  I thought it was handled well, although I’m pretty sure the temperature of the room shot up 10 degrees during each scene. (Yes, multiple scenes! Libba has given the people (or at least me) what they (I) want.)

Talky Talk: If It Weren’t For Those Meddling Kids

The writing in this installment is delicious, and builds upon the vast, sweeping American landscape imagery that Lair of Dreams set up. Lair of Dreams was all about innovation and expansion, whereas Before the Devil Breaks You focuses on the dark consequences that can have. At what cost comes this brand “new” land and inventions that will make some lives easier? Who is harmed, who is left behind, whose backs is it all built upon? Who is complicit?

It’s not all doom and gloom, of course, even when the circumstances are all doom and gloom. The cheeky 20s slang is still present, but it remains dialed back in favor of the characters’ gallows humor in these dark times. Let the writing speak for itself:

“Now, hold on a minute! As a matter of fact, I…I have a date. With a darling boy. From New Jersey,” she lied.

Theta settled the ice bucket on the dresser and took out her flask. “Here. Ice. We’re making Poor Man’s Manhattans.”

Theta smirked. “You whisper ‘vermouth’ over the glass, then fill the rest with whiskey.”

“Say, I like your Manhattans! But what’s the ice for, then?”

“For the headaches we’re gonna have later.”

After all, everybody had something about them that could be lovely on the one hand and annoying as hell on the other.

It’s good, you guys. My only complaint is that the beginning was a bit slow, because with an ensemble cast and the epic plots of the last two books, the set-up takes some time. Once things got rolling, however, it was unstoppable.

I don’t know if Libba Bray could have made it any more clear that history repeats itself, unless that was the title of the book. Plus, she throws in historical, cultural references, from the Founding Fathers to  radium dials to Nietzsche to eugenics, that make the world-building so much richer. (I love when YA authors do this—when I was an actual YA, I was so intrigued by and became obsessed with many topics mentioned in the books I read. I’m guessing there’s more than one mini-nerd out there today doing the same thing. They have so much material to work with here.) In a lesser author’s hands, it would be heavy-handed. In this book, it’s just good.

The racial, ethnic, sexual, and socioeconomic diversity remains one of the defining characteristics of the series. Yeah, it has a ghost serial killer, but the cast taps into the very best of the rich multicultural history in NYC. Nothing like supernatural abilities and a creepy-ass ghost gunning for supreme power to bring disparate parts of society together!

Be advised that both sexual assault and domestic violence are present in this installment.

Relationship Status: Hail to the Chief

Libba, this book reads like a social justice manifesto and a love letter to American history with some ghosts and pretty dresses thrown in, and I freaking love it. I’m not sure how you manage to make your message so clear while also keeping up with the thrills and chills, but I pledge my allegiance to your vision of America. You’re the president of my bookshelf—and ghost-loving, history-nerd heart.

No pressure, but is it time for Book 4 yet?

FTC Full Disclosure: I received a free review copy from Little, Brown. I received neither money nor a pet unicorn for writing this review, despite how hard I wished for one. Before the Devil Breaks You is available now.