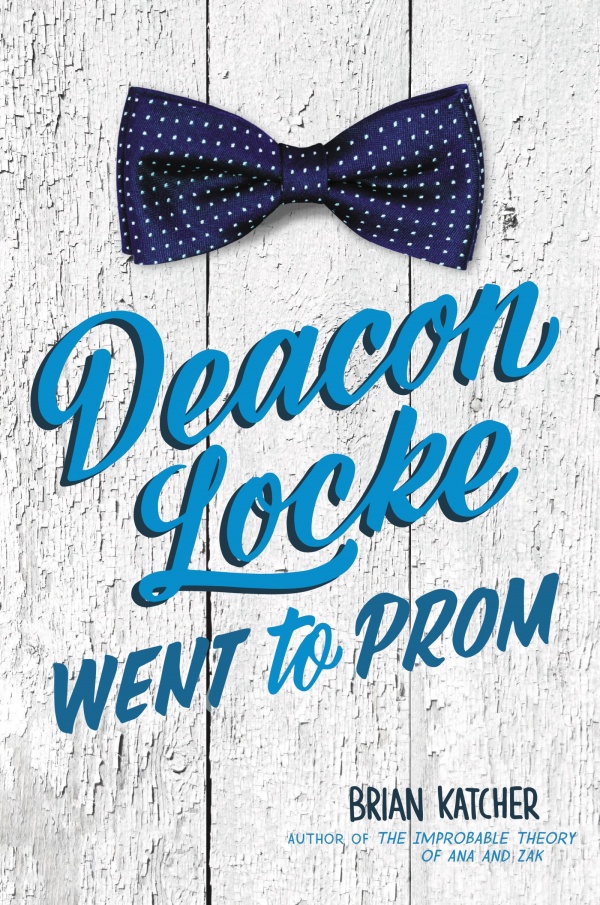 Cover Story: Puttin’ On The Ritz

This cover is great: it screams “prom,” but in a fun, stylized way that’s much more appealing than a Fancy Dress cover. Well done, cover designers!

Deacon Locke is an absurdly tall, awkward high school senior who is starting to realize that his prom might be the last chance he gets to do something “normal” before high school is over. Amidst the promposals cluttering up the hallways and his headspace, he decides that he’s going to bite the bullet and go. The only problem is, the girl he wanted to take is now going with someone else. What’s a guy to do?

Enter Jean, Deacon’s grandma. She’s practically Deacon’s best friend, and if anyone deserves a night out on the town, she does. Little does Deacon know that taking his grandma to the prom is going to turn him into the latest internet sensation. Will his fame bring him love and riches, or just humiliation and angry YouTube comments?

Oh, Deacon. I just want to get up on a stepladder and pinch your cheeks. You’re such a nice fella! Much like his author, Deacon has a good sense of humor, and I love that he has a nice enough relationship with his grandmother that he actually wants to take her to prom. (Sure, it’s also the easy way out, but go with it for now.) He’s pretty much the polar opposite of his absent father, who is somewhere on the other side of the globe. Through his brush with fame (which he isn’t initially aware of, given that he eschews technology), he remains stubbornly kind. He feels like a real person, even (or especially) when he’s convinced that he’s too dorky for words. (He is; that’s why I love him.)

Deacon’s got a cute romance with Soraya, a young Lebanese dance instructor at the senior center. It’s fun to get in his head—he’s Such A Guy™, but in a way that will make you fondly remember your more innocent relationship days, not an Abandon Hope, All Ye Who Enter Here, reading-the-paper-in-Steubenville sort of way.

Talky Talk: I Came, I Danced, I Went Viral

Between Deacon’s dry humor, and his irrepressible new bestie, Elijah (who enthusiastically appoints himself as Deacon’s new best friend, despite Deacon’s reservations), the book is full of giggles. “Deacon, are you okay? You look funny.” I let out a loud burst of laughter….“Elijah, I could kiss you!” He glances over his shoulder. “Um, okay. Don’t tell Clara.”

While a lot more than “just” prom happens in this book (it’s also the story of how Deacon figures out who he is and what he wants out of life), the voice here is dead on. Katcher writes a character who is struggling with the weird liminal state between being a kid versus being an adult. Add in his first girlfriend, his worry about his aging grandmother, and his lack of any other parental figures, and suddenly going off to college starts to sound downright easy.

Having a sassy grandmother as a best friend and guardian is pretty awesome. Promposing and taking her to your high school career’s biggest dance? Even better.

I say this a lot, but I sure am glad that I came of age just as the internet was becoming A Thing, instead of today. As much as I miss my teenage metabolism, the idea of my entire life being available to capture and upload to share with the world is horrifying. If you’re lucky, you’re like Deacon and you get a bunch of comments from admiring fans, thinking you’re the cutest*. Deacon handles it well, all things considered.

*Eagle-eyed readers may notice that certain internet commenters in this book are named after FYA writers!

Book, knowing your author, I figured we would have a good time, and I was right—you made me laugh, you made me smile, you made me wish you had cheeks to pinch. I want to buy you a beer and tell you that everything will be okay, then swap stories about the most obnoxious experiences we’ve ever had on the internet. (I think you’ll win.)

FTC Full Disclosure: I received my free review copy from Katherine Tegen Books. This review was originally posted on Kirkus Reviews in exchange for monetary compensation, which did not affect or influence my opinions. Deacon Locke Went to Prom is available now.