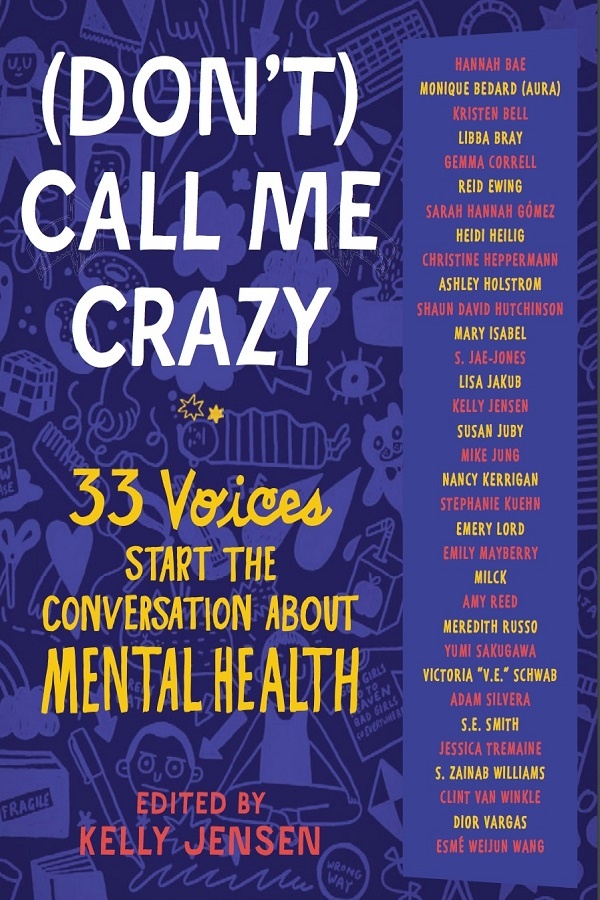 Cover Story: Phone Book
The Best: I Hate To Interrupt This Conversation about Mental Illness, but Guess What–I’m Autistic, by Mike Jung
The Best: I Underwent Cosmetic Surgery for My Body Dysmorphia…and I Wish I Hadn’t, by Reid Ewing
The Most Depressing: Fighting the War on the Homefront, by Clint Van Winkle
The Most Relatable: Rituals, by Libba Bray
Bonus Factors: You’re Not Alone, Trichotillomania
Break Ice In Case Of: You Need a Pick Me Up

I know they didn’t want anything cutesy on a serious book, but this really looks like some kind of SAT prep guide. The title is catchy, and the interior has colored borders and cartoons. Still, this has the air of a dry, technical reference book.

The Best: I Hate To Interrupt This Conversation about Mental Illness, but Guess What–I’m Autistic, by Mike Jung

Author Mike Jung, who I had the pleasure of meeting at a literary conference, tells about growing up with autism, though he was not diagnosed until he was middle aged. Jung talks about how people reacted: shock, pity, fear, or amateur diagnosis. But when it all comes down to it, Mike is just a regular guy and being autistic doesn’t change that. Just don’t call him Mikey.

The Best: I Underwent Cosmetic Surgery for My Body Dysphoria…and I Wish I Hadn’t, by Reid Ewing

Actor Reid Ewing (he has a recurring role on Modern Family) talks about how he became addicted to plastic surgery. A chin implant here, a cheek procedure here, just some minor surgery to make him more attractive and more likely to be cast. But the human face isn’t made of Play Doh and pretty soon he was having plastic surgery to fix the screw ups from earlier surgeries. This guy was only twenty, and he’d risked ending up looking like Lon Cheney’s ugly brother. While Ewing doesn’t shame anyone who chooses to have cosmetic procedures, he does show that it’s not a cure for disliking what you see in the mirror.

The Most Depressing: Fighting the War on the Homefront, by Clint Van Winkle

Author and Marine Clint Van Winkle talks about his experiences in Iraq and his PTSD. It’s about as depressing as you’d expect. Skip this one unless you’d like to read about a busload of Iraq civilians accidentally killed by US forces. And the windshield wipers just kept moving, even after…

The Most Relatable: Rituals, by Libba Bray

The great Libba Bray writes a script (probably the best chapter in the book) of an argument between herself, Anxiety, and OCD on an airplane.

It’s ridiculous to imagine an award-winning author forcing herself to read and reread the same page over and over just because she forgot to check the page numbers. Again and again and again. Or force herself to erase the ENTIRE typed word when editing, rather than just the wrong letters. Because then the other words would have to hold a funeral for their fallen brother.

Ridiculous. Silly. Much like my own habit of not throwing away the peanut butter jar and its lid in different recycling bags because they belong together and would be sad otherwise.

It’s always the stigma, isn’t it? Everyone has preconceived notions about mental illness. Everyone’s an expert on autism or gender issues or eating disorders, etc. But when it comes down to it, there are a lot more people than you’d expect who have the same issues you do. And a lot of them are famous writers and other entertainers.

You’re unusual. You do odd things. And you’re awesome.

Ashley Holstrom writes an interesting piece about her compulsion to pull out her own hair, leaving her with scabby skin and no eyebrows. A fascinating look at an uncommon and misunderstood disorder.

Break Ice In Case Of: You Need a Pick Me Up

Honestly, I would have liked more personal accounts. Most of these stories were along the lines of ‘I overcame X, and you can too!’ Still, it’s nice to hear all these familiar voices and know that maybe I’m not the only one who checks my alarm clock over and over and over, or still looks under the bed at night (sometimes). Hey, we’re all in this together.