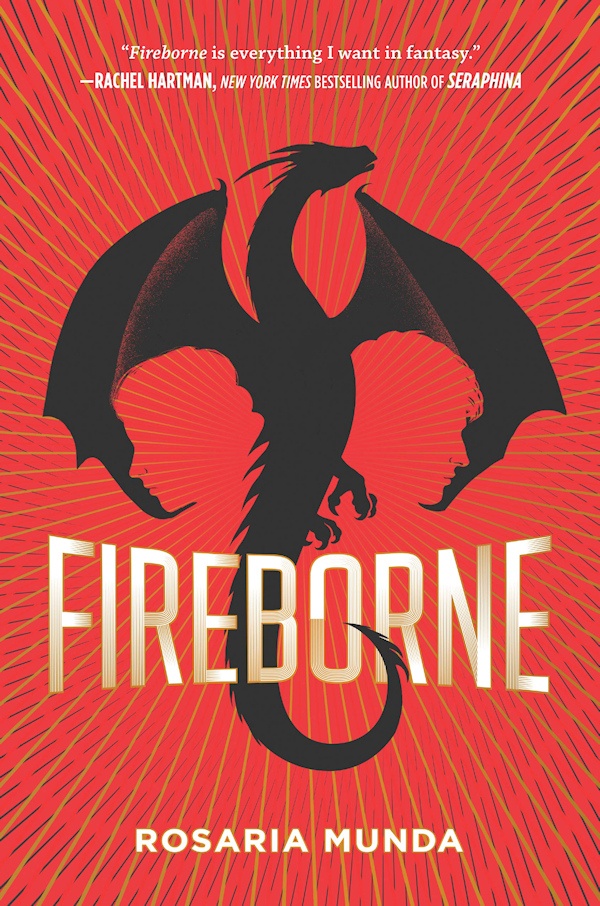 There’s nothing hugely outstanding about this cover, but it brings to mind the kind of political propaganda poster that the characters in the book might see around their city of Callipolis, so I applaud the theming.

Once, three dragonlords ruled Callipolis and its surrounding lands. If you ask them, they did what must be done, and life was good. If you asked their people, well, you may get mixed opinions depending on the amount of money one had. To that end, ten years past, a man named Atreus began a revolution—the bloodiest Callipolis had ever seen—and killed all the dragonlords and their families in order to bring about a new regime. One with equal opportunities for all, where a simple serf could ride a dragon instead of starve. Except he didn’t quite kill all the dragonlords’ families. Some managed to escape to the islands of New Pythos, where there are rumors they have dragons who are mature enough to breathe fire. And one dragonlord’s child, a little boy renamed Lee, never actually left.

Lee has lived the last ten years under a false identity, becoming a dragonrider who is now competing against people like his best friend, Annie, for the title of Firstrider, leader of all the dragonriders and defender of the city. But if the rumors of New Pythos are true, will Lee be able to fight his long-forgotten family? And, more importantly—does he want to?

Lee’s life can be summed up as that little spot between a rock and a hard place. His entire family was murdered before his eyes. He was dumped at an orphanage at eight years old and has had to lie about who he is, lest he be killed for simply being a part of the old ways. After ten long years under Atreus’s rule, he does see that many things have changed for the better, but that also gives him a huge crisis of faith because he thought his family were decent people. Because of his privileged upbringing, he’s “naturally” very good at many of the things that make a person excel at being a dragonrider and a leader, so that brings him into the orbit of very important people he must always lie to. I felt for Lee quite a bit, but being his friend might be kind of exhausting.

Annie is not without her own complications, but overall hers is a rags-to-riches tale. As a serf-turned-orphan whose family was murdered by a dragonlord before the Revolution, she benefited the most from Atreus’s new world order by being given the opportunity to bond with a dragon and get proper schooling. She is Lee’s best competition for Firstrider, but a lifetime of trauma has also made Annie unsure if she even deserves to be a leader (you do, hon, you do!). She’s also the only one who knows Lee’s secret, as they were each other’s lifelines at the orphanage where they grew up. So she is uniquely aware of the conflict he faces when there is talk of a coming war. She’s faced with a conflict of her own: does she turn Lee in before he can do any damage, or trust in the values she hopes they share? Annie’s character felt very familiar, like many fantasy heroines with sad backstories that came before her. But I did like those girls, and I DO like Annie, even if her story isn’t the most unique.

If you ask any of their friends, they will tell you that Annie and Lee share some kind of unspeakable bond because of the suffering and secrets they share. They always seem drawn to each other, despite the distance they sometimes deliberately put in their own way. It’s a classic friends-who-will-probably-become-more-but-it’s-complicated, though, to be fair, it IS probably more complicated than your average will-they-won’t-they. Because Lee’s dad is the dragonlord who killed Annie’s family (yikes). And add in Annie questioning Lee’s loyalties, plus a lot of repressed emotions from not being able to process your traumatic memories in a healthy way, and, oof, it’s almost easier to say, hey guys—just cut your losses and move on. Find a less damaged person to care for. But when has love ever been practical?

Can a well-written book be boring? Because if it’s truly well-written, then shouldn’t it be fantastic? I know there’s different strokes for different folks, especially when it comes to literature, so objectively I think the answer to that question is yes. But in regards to my personal perspective on this book: what the heck am I feeling? Because on one hand, I think Munda has a lot of great ideas, and it’s clear that she is a lover of history. She cites Plato’s Republic and the French Revolution as influencers. Her writing style was mostly good; I had some stumbles in the beginning with odd phrases/sentence structures that forced me to stop and reread lines, but by the end it was either smoothed out or I’d gotten used to it.

But my biggest issue is the first half meandered, like a lot. For reference, it took me almost three weeks to read this book and I finished the last forty percent in an afternoon. Is the last half of the novel and the interesting moral dilemmas in which the author puts her characters through enough for me to recommend you this novel? I really don’t know. I think I’m personally intrigued enough to read the next one, if that helps.

This is a fantasy novel (see: dragons) but the rest of Callipolis feels very grounded in reality compared to many dystopian YA worlds. There’s no other magic or special abilities that the characters in charge employ; just your everyday political gas-lighting and burning of questionable books! Munda said she wanted to take a look at what happens after the “good” guys win a revolution. The story did present some really great moral quandries taken from real life that I don’t think have easy answers. For example, what kind of person does it take to be strong-willed enough to lead a revolution of the people to topple their current form of government, especially when that results in hundreds of deaths? Is Atreus a good revolutionary turned leader? Is he just as bad as those he deposed, just in different ways? And is there ever any form of government that can succeed without an element of propaganda (certainly doesn’t feel that way in our current global climate!)? How do you stay strong in your moral convictions when facing things like famine? It’s all pretty heavy stuff, but I liked that it made me think.

There’s a flashback to when Annie and Lee are young and debating leaving the orphanage with Atreus to become dragonriders. They share this moment that I kind of loved because I think it perfectly encapsulates the notion of our ideals in the face of power that Munda is striving to portray:

“Think about it this way,” she said. “Even if they’re bad, we’ll be the ones with the dragons in the end. We’ll make the rules. And we’d never be bad, would we?”

Dragons are just cool. But one of the minor gripes I had with this book is that there aren’t enough dragons! And yeah, okay, I KNOW that dragons aren’t really the POINT. But the heart wants what it wants. The dragonriders and their dragons kind of “imprint” on each other, and their minds during combat are closely linked. That’s cool. I’m hoping we’ll get more dragon bits in the next book, but if not, I’ve got a suggestion below for anyone jonesing for more actual dragon-to-person interactions.

That was a weird date, Book. You started off reticent and I wasn’t sure I was feeling it, but then you engaged me in a philosophical debate, and we ended up having a cool but way intense conversation. I don’t know if I’m more interested in you romantically or intellectually. Perhaps I’ll give you one more date to see where this connection leads.

FTC Full Disclosure: I received my free review copy from G.P. Putnam’s Sons Books for Young Readers. I received neither money nor peanut butter cups in exchange for this review. Fireborne is available now.