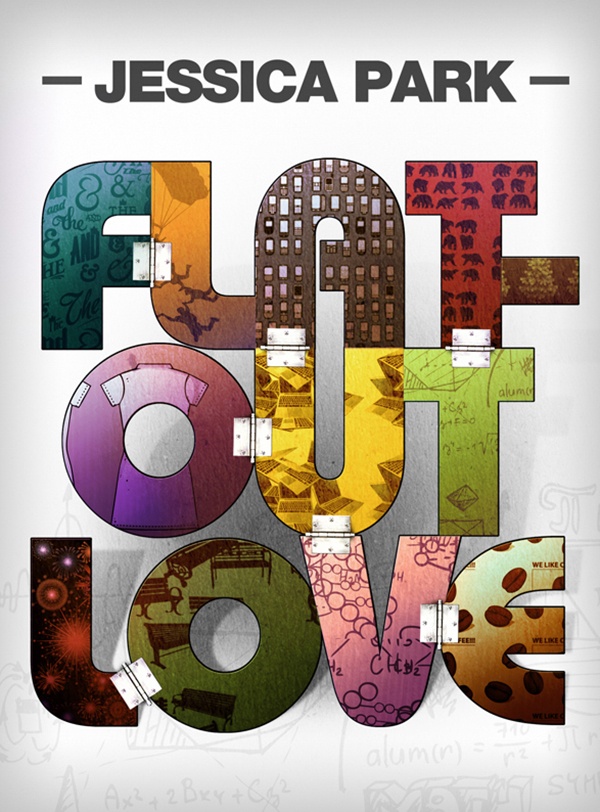 I can’t actually comment too much on this cover because it’s kind of…a spoiler? So I’ll just leave it at this: It’s relevant to the story. And cute!

Julie Seagle is pumped about starting her freshman year of college in Boston, until she shows up to the apartment she rented on Craigslist to find that she was scammed and her “apartment” doesn’t exist. In a bind, Julie’s mom calls up her old college roommate, Erin Watkins, and arranges for Julie to stay with her until things get sorted out. But Julie quickly realizes that something is…off in the Watkins household. Erin and her husband Roger are distant and strange; their oldest son, Finn, has disappeared to travel the world; Matt, the middle child and a junior at MIT, is a socially awkward geek who shoulders most of the family responsibility. And then there’s 12-year-old Celeste, fastidious, freakishly smart, and at any given moment, hauling around a cardboard cutout of her oldest brother. She treats Flat Finn as though he were Real Finn, and the family seems to just go with it. Before she knows what’s happened, Julie is in deep – with Celeste, with Finn, with a family secret that begins to bubble to the surface, whether they’re ready for it to or not.

Y’all. Julie is hilarious. I loved her open honesty, her snark, and the way she was able to accept Celeste’s quirkiness without batting an eyelash. She wasted no time making herself at home at the Watkins house, while still recognizing boundaries, of course, and warmed the Watkins’ hearts as much as she warmed my own. Julie isn’t perfect, though. Her desire to help sometimes erred on the side of meddling, and she could be a little pushy, especially when it came to helping Celeste move past her need to cart around Flat Finn. But it all came from a good place…and perfect is boring, anyway.

Also, a BFF charm to Matt, who is totally my brand of nerd funny, and who is incredibly protective and fiercely loving of his little sister.

When Julie finds out that the eldest Watkins, Finn, is a total hottie who spends his days traveling the world doing charity work while looking rugged and sexy in his Facebook photos, she quickly sends him a little message letting him know she’ll be staying in his bedroom for awhile. The two begin exchanging messages, emails and chats. Turns out, Finn is hilarious to boot, and totally charmed by Julie. Some of their messages nearly set the pages of this book ABLAZE (except, it’s an e-book…so it’s more like an explosion, Galaxy Note7-style). And if that weren’t swoony enough, Julie can’t help but feel like she’s growing dangerously closer to Finn’s brother Matt every day that she stays in the bedroom next to his.

While this isn’t a sex book, the swoon was sometimes so amped it made me light-headed. Like. Damn. I never knew skydiving metaphors could be so hot.

Talky Talk: Must Be This Tall to Ride

Well, I hope you’re ready to ride the roller coaster of EPIC FEELS. Flat-Out Love managed to make me laugh out loud and cry like a baby, sometimes in the same chapters. Julie’s voice is irreverant, snarky and hilarious – as were Finn’s and Matt’s and even Celeste’s – yet there are heavy issues at play here. And on top of all these feels I was feeling, there’s this underlying current of…doom. Okay, maybe “doom” is a bit hyperbolic. But it’s clear that something deep and dark is lurking in the Watkins’ past and you know whatever it is, it’s not going to be pretty when it inevitably rears its ugly head. Jessica Park managed to create a lovable cast of characters who are dealing with internalized issues the best way they know how, which makes them feel incredibly human.

Matt is a tech geek/math nerd who goes to MIT and wears t-shirts that say things like “I’m Uncertain About Quantum Mechanics.” Cute nerds: I’m into it.

I loved the status updates from the main characters that Jessica Park included at the beginning of some of the chapters. They were quirky and weird but perfectly encapsulated each character’s personality. Some examples:

Matthew Watkins My visit to the O.K. Corral was… well…

Julie Seagle I like the gritty intensity of Jaws 4. There is a simple honesty to the storytelling that is utterly compelling. Plus, the shark roars.

Oh, Book, you thought you were rid of me? Nope. Never. We are in love, and I’ll be moving my stuff over to your place next week. I need you around all the time, for multiple rereadings or just to sneak a peek at some of my favorite moments. I’m never letting you go!

FTC Full Disclosure: I did not receive money or Girl Scout cookies of any kind (not even the gross cranberry ones) for writing this review. Flat-Out Love is available now.