This bubblegum pink cover does not fit its insides. I’ll give it the benefit of the doubt that this wasn’t some cover designer’s complete ineptitude and that this juxtaposition is the point and the statement it wants to make? But, honestly, it does throw me a bit. My favorite touch, though is the red ribbon decaying into a trail of blood, and that kind of macabre feels fitting. In my mind, this cover should be a close-up shot of the hollow of a tree in the woods with a ribbon turning into blood near some crushed flowers, as the language of flowers is a big part of the book (and this pink version does have a nod to the flowers with the faint outline).

It’s tradition. The women in Garner County spend their sixteenth years in the wilderness, banished from their homes, while they release their “magic” so they can return to be obedient, plain wives and laborers. You aren’t supposed to talk about what happens to you during your grace year, even when you watch as the women who return, year after year, come back broken, starved, missing bits of ears, fingers, or limbs. But the other outcome is worse: plenty don’t come back at all.

Tierney has spent her childhood trying to discover more about what she’s walking into, but there’s nothing that can prepare her for what she finds when she walks through the front gate and gets locked into the compound. If she survives starvation, she may be attacked and skinned by poachers who sell parts of the girls as “restorative” medicine. If she steers clear of poachers, she has her fellow girls to contend with (and one in particular wants her dead).

Can Tierney survive the year and make it home? More importantly, with everything she’s learning about herself, her friends, and her society, does she even want to?

Tierney might not consider herself a survivor right off, but she is! She’s always planned to be a laborer instead of a wife, because she doesn’t think she has the temperament to be a good, proper spouse. It’s good to know your strengths and weaknesses. She’s curious and intelligent, and her father (who always wanted a son) taught her many practical outdoorsy skills, which come in handy during her grace year. I would totally be her friend, especially if she could help me build a fire and find food! Of course, her practicality and unwillingness to “give in” to her “magic” make her a prime target for the Regina George of the group, so I’d have to have quite a strength of character to stick by her side (but that’s what besties do best!).

The romance in this book is too tough to talk about without spoiling things, and I think it’s better to go in with no foreknowledge, so I’m going to have to plead the fifth. Sorry! We can discuss in the comments if you’ve read it!

While reading, I don’t know if it worked in my favor or not that I am one of the few people out there who has not read or watched The Handmaid’s Tale. (I’ve tried to read it twice, but I just don’t like Atwood’s writing style.) I’ve seen plenty of readers calling The Grace Year twenty-nineteen’s answer to Atwood’s classic, and while I haven’t read it, I do know the gist of that story so I can see why they do so. It’s an undisclosed point of time (there’s nothing to say this is an alternate world to ours, or our past or our future); a claustrophobic community (Tierney’s home of Garner County is one isolated village, and it’s impossible to tell if there are other counties like theirs all over or if the rest of the world is free); and, a tale about the subjugation of women. Liggett’s writing and pacing were compelling. If you’ve learned anything about me over the last few years, it will not surprise you that I wasted good sleeping hours staying up to read this book. #noregrets

It’s a powerful story, and very sobering when you think that there are women right now who are experiencing this suffocating patriarchy in many different forms. I was enraged and scared, hopeful and awed at the resilience of the female spirit. I loved this line:

“We hurt each other because it’s the only way we’re permitted to show our anger. When our choices are taken from us, the fire builds within. Sometimes I feel like we might burn down the world to cindery bits, with our love, our rage, and everything in between.”

Was I completely bowled over by the book itself? I don’t think so. I feel like a lot of the visceral reactions we as readers are having right now is because of our current political and societal climate, and how we’re relating to what we’re seeing on a personal level (especially when it seems like many of our current leaders would in fact look to this book as a how-to manual). Putting that aside…it’s a really good dystopian novel; it didn’t change my life, but that’s okay. It may be an eye-opener for an actual teen who hasn’t been introduced, quite yet, to all the worst ways we can treat one another (or, you know, for the one who can’t stand Atwood).

Bonus Factor: Lord of the Flies

So, if you’ve been aboard the hype train, you’ll know The Grace Year is also being compared to Lord of the Flies. Once the “magical” sixteen-year-olds are separated from the rest of the community, it becomes a real dog-eat-dog world. The social politics of a group forced to interact for survival are endlessly fascinating; more so when I personally don’t have to be in it myself (getting thirty-three people to agree on the same things is impossible). The entire compound where the ladies are trapped is designed to be as uncomfortable as possible, and factions—and cracks—quickly begin to form within the teens. Why can’t we all just get along?! (Well, you’ll see why.)

One pervasive theme in this book is that things aren’t always what they seem. Tierney goes into her grace year thinking one way about certain things—her town, her family, herself—and comes out with her eyes wide open. She was certainly more self-aware, beforehand, than many of her fellow grace year girls, but she still missed so much.

I mean, of COURSE this is an anti-bonus factor. This book is infuriating and scary and exhausting. Why are some people so horrible, but why does nothing about this story even surprise me anymore? Tierney is as jaded as we are, and I can’t blame her for it:

“Amy Dumont. Delicate, sweet. She would make for a docile wife, but her hips are too narrow, beddable to be sure, but not sturdy enough to withstand childbirth. Of course, some men like breakable things.

Let me know when you’re ready to say enough is enough, Book. I will be right there with you, pitchfork in hand, ready to burn this mother to the ground. For more girls trapped together on a small island and horrible things hanging out in the periphery that want to get them, you should be reading Wilder Girls.

This whole idea of a group of teens having to survive a harsh experience that misguided adults force on them? Yep, sounds like this is just up Suzanne Collins’ alley. How long has it been since you read The Hunger Games? 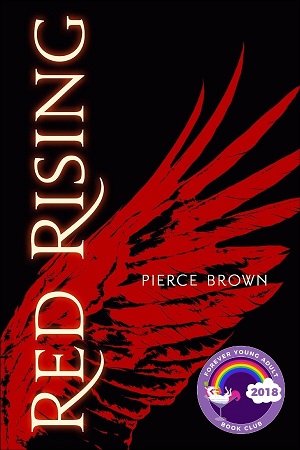 The factions within Red Rising are not afraid to get brutal, but they are just as trapped by their circumstances as the grace year girls.

FTC Full Disclosure: I received my free review copy from Wednesday Books. I received neither money nor peanut butter cups in exchange for this review. The Grace Year is available now.