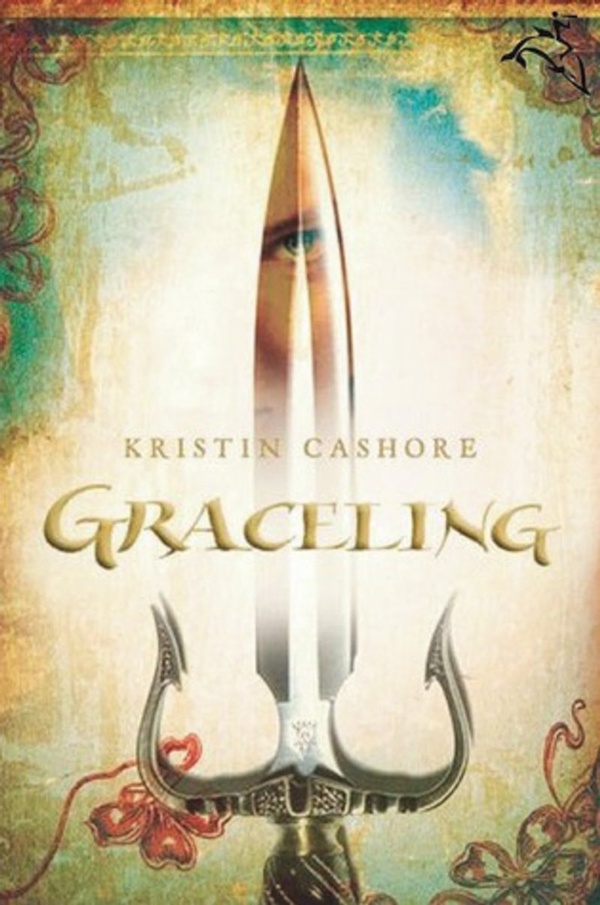 BFF Charm: Yay!
Talky Talk: Straight Up with a Side of Lord of the Rings
Bonus Factors: Duckie, Karate Kid
Relationship Status: I Will Always Love You

OK, you guys, stick with me here, cos this is one of those fantasy type books with, like, a zillion kingdoms and weird names, etc. etc.

Katsa is a Graceling — a person born with a superhuman ability, or Grace — in a world that fears and rejects Gracelings. Everyone’s Grace is different, and even the same Grace (like mind-reading) works differently in different people. Gracelings — known by their two differently colored eyes — are sent to the king, who determines whether or not he can use them. Katsa happens to be the niece of King Randa of Middluns (there are seven kingdoms), and she happens to be graced with killing (I know, right?!!!). Randa uses her as his personal assassin and kneecapper, but she rebels by secretly forming a council and uses her grace to seek out and right injustices in the land.

On a mission to rescue the kidnapped father of the king of Leinid, Katsa encounters a mysterious Graceling with fighting powers, who turns out to be the Leinid prince Po. Po is on a mission to find out who kidnapped his harmless grandfather, and why, and he starts with the Middlun lady Katsa who rescued the old man. In Po, Katsa finally finds someone who can (almost) match her in a fight. In Katsa, Po finally finds someone he can trust with his greatest secret. They each find their first true friends as they set out on a grueling quest to uncover the truth behind the grandfather’s kidnapping, discover what happens when a Grace is in the hands of evil, and truths about themselves.

I just wanted to grab Katsa and hug her and tell her to please be my friend — she’s so sad and lonely, and doesn’t think she deserves friends when obvs. she’s actually caring and kind and smart, and I just want to reassure her. Plus, she’s also witty and funny and tough, and on fire to change the world, and that’s just like my best friends for reals.

All the way through the book, I loved the chemistry between Katsa and Po. Nothing gets me like a little reluctant love story — they’re a little like Beatrice and Benedick with their sparring, and Katsa’s determined resolution never to marry (that doesn’t mean she never plans to be in luuurv, though, so don’t worry). You know they’re meant to be together, but …

The ending was totally unsatisfactory (I’m all for the main female character saying she never wants to marry and sorry, dude, “I love you but i’m not going to subjugate myself to you forever,” but srsly? I at least want her and her man to spend some happy time together after reuniting after they both almost die and not just be all, “Hey, check you later lalala!” you know?). Reading the book was like having this awesome meal with a fab. dessert on the menu (like champagne and cupcakes and something chocolatey), then having the waitress come out and say, “Oops! sorry, there’s no dessert tonight.” I mean, I loved dinner and will continue to think about it (and let’s be honest here, I definitely do think about great dinners months later — I’m looking at you, Il Trattoria Quattro Leoni in Florence), but I’m super bummed about dessert.

Talky Talk: Straight Up with a side of Lord of the Rings

So, this is totally lords-n-ladies fantasy (minus the dragons and elves) and the dialogue reflects that — kinda stilted in places, and totally not how, like, you know, teens talk. But it works, and Katsa’s delightfully sarcastic and witty, and Po’s easygoing personality shines through. There’s a bit of not-so-subtle grrl power preaching thrown in, but it’s not overwhelming and it’s all good stuff to preach (like domestic violence is bad, and girls should learn to defend themselves against dirty predators).

Ok, Katsa’s cousin Raffin isn’t exactly boyfriend material, but he’s a totally rad BFF for Katsa and seems like a pretty cool dude. He stands up for her to his mean dad, which is always cool in my book.

Katsa can take anyone out, and she totally uses her powers for good, not evil. A kickass chick whose idea of a good date is a no-holds-barred tussle is pretty awesome. Girl’s got MOVES.

Relationship Status: I Will Always Love You

Ok, so I totally loved this book SO MUCH until the end, just like those relationships where you know it’s time to say goodbye, even after all the good times. I kind of wish Kristin Cashore had known when to say goodbye when she wrote the ending, because now my feelings about the book are bittersweet instead of just twue wove.

FTC Full Disclosure: I purchased this book with my own money. I received neither cocktails nor compensation in exchange for this review.