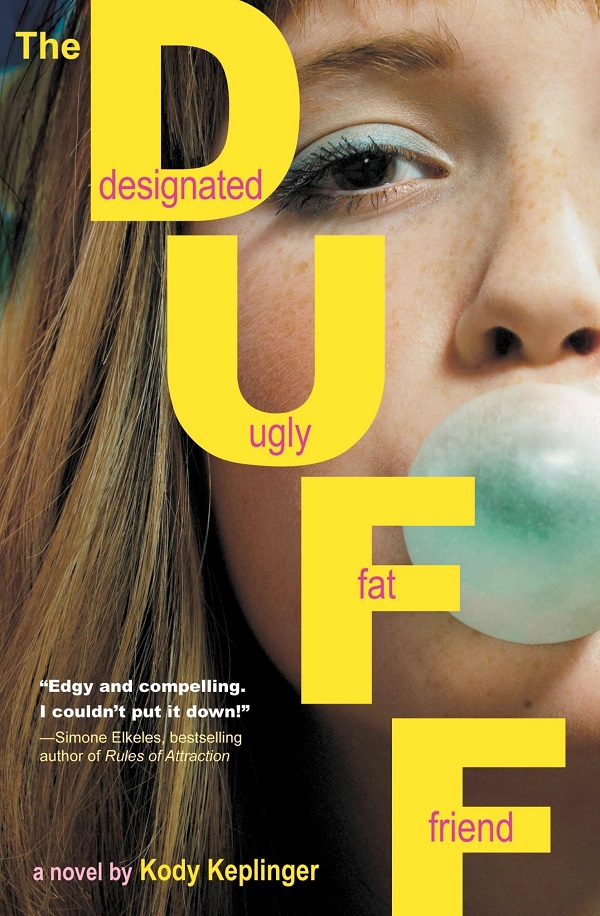 Bianca Piper is used to putting up with shizz. Her motivational speaker mom is always out of town, leaving Bianca in charge of her sad sack of a recovering alcoholic dad. Sure, she’s got two best friends, Jessica and Casey, but they’re both prettier and more popular than she is. Biding her time until graduation, when she can finally get the hell out of sucksville, Bianca spends her days crushing over nerdalicious Toby Tucker and her nights at a local teen club watching Jessica and Casey have a better time than she ever will. All of this simmering unhappiness explodes the night that Wesley Rush, resident man whore, calls her the Duff, which stands for… ok, which in this case stands for Designated Ugly Fat Friend. In spite–or really, BECAUSE–of her anger, Bianca finds herself drawn to Wesley, and their smokin’ hot hook-up sessions quickly become the only thing keeping her afloat. But even the best sex in the world can’t cure everything (sorry, Prince!), and Bianca soon finds it impossible to ignore her broken family life as well as her growing connection with Wesley.

Y’all, I tried to like Bianca. I really did. I mean, you know I love feisty asshole heroines, but gimme something to go on! Maybe a bit of charm? Or perhaps a dash of badassery? The only thing I got from Bianca was a bucket full of eye rolls and heaping plate of JUDGMENT. I can’t believe I’m using this term seriously but BIANCA IS SUCH A NEGATIVE NANCY. GAH. She hates on EVERYTHING, from her supposed besties to her very own self. And I know what you’re thinking–“But Sarah, that’s just how teenagers ARE!” And of course, you’re right, Bianca is a typical angsty bundle of raging hormones, wrapped up in a sense of entitlement. What bugs me isn’t the authenticity of her character, it’s the glaring lack of empathy that should be inspired by that authenticity. Even the most flawed characters can become lovable in the context of a well-crafted story, but unfortunately for Bianca, this book left her to fall miserably and annoyingly flat.

And as if that wasn’t enough, Bianca had to go and hate on dancing. AW HELL NO. That’s what I call a BFF deal breaker.

Kody Keplinger is not afraid to bring on the sexy times, and for that I gotta give her some pants (that’s my slang for props, btw, and not a statement that she needs to, like, be more chaste). In fact, some of the scenes are so steamy, I made it a bonus factor. HOWEVER. Swoon isn’t just about lady parts getting together with man parts. It’s about chemistry and tension and emotional connections and the feeling that two character must get together immediately or else THE WORLD MIGHT END. As you can see by the score, Bianca and Wesley did not illicit such a feeling. It’s not the story that’s the problem (Good girl drawn to bad guy? Hello, it’s a classic!), but, as I mentioned above, the flatness of the characters. Wesley is a delicious blend of YA cliches–muscular, charming, cocky, heart of gold–and, well, that’s about it. He never develops into anything real, even after the author slaps a semi-tragic family background behind him. Given how well Keplinger can paint a sexual picture, it’s a shame she doesn’t apply the same layered brushstrokes to her characters.

Much of the promotion of The DUFF has focused on the fact that Keplinger wrote it when she was 17-years-old. Ok, obviously it’s AWESOME that a teenager wrote an entire book that’s actually readable. I certainly never accomplished such a feat when I was in high school, and for that, the publishing world should thank me, cos it would’ve been a huge melodramatic pile of shizz. But while I appreciate Keplinger’s precociousness, I approached this book like any other piece of YA, and based on that perspective, I was disappointed. Not only do the characters lack depth, but the story itself ends up feeling like a (well-meaning) after school special on “Loving Our Bodies and Ourselves.” Sure, Keplinger applies a liberal amount of profanity and slang, but all the f-bombs in the world aren’t enough to support the emotional weight necessary for a story to ring true. So when things get serious, particularly the scenes between Bianca and her dad, they merely serve as a cringeworthy reminder that the author is, yes, most definitely a teenager.

I’m sorry, what was I saying? OH RIGHT YES the book, the book. The DUFF. Of course. AHEM. So yeah, there’s lots of sexy business between Bianca and Wesley, and I have no doubt that copies of this novel (with certain pages more dog-eared than others) will be passed, amidst much whispering and giggling, across cafeteria tables for years to come.

As I mentioned above, Bianca and her friends hang out at a place (called The Nest) that seems to exist only in the realm of classic tv shows: a teen club that is actually cool. Seriously, I would LOVE to meet a real person that, back in high school, frequented the non-alcoholic version of a bar, and NO, a church coffeehouse does NOT COUNT. I couldn’t help but be reminded of The Bronze, in all of its ridiculous night club glory, and how jealous I was that Buffy and the Scooby Gang got to slip on sequined halter tops and dance til dawn ON A SCHOOL NIGHT. Anyway. The Nest isn’t as cool as The Bronze, but it DOES have a bartender named Joe who pours cherry cokes with a very heavy hand.

When I heard about The DUFF at BEA, I was hit with a wave of book lust. From across the room, it looked like a sexy, smoldering piece of literary action. I was drawn to its message and tantalized by the promise of forbidden love. We hooked up that very night, but our encounter was an empty, disappointing affair. The next morning, I awoke with a hangover of regret, so I made a hasty escape after leaving a note on the pillow. And no, I did NOT include my phone number.

FTC Full Disclosure: I received my free review copy from Poppy. I received neither money nor cocktails for writing this review (dammit!). The DUFF is available now.