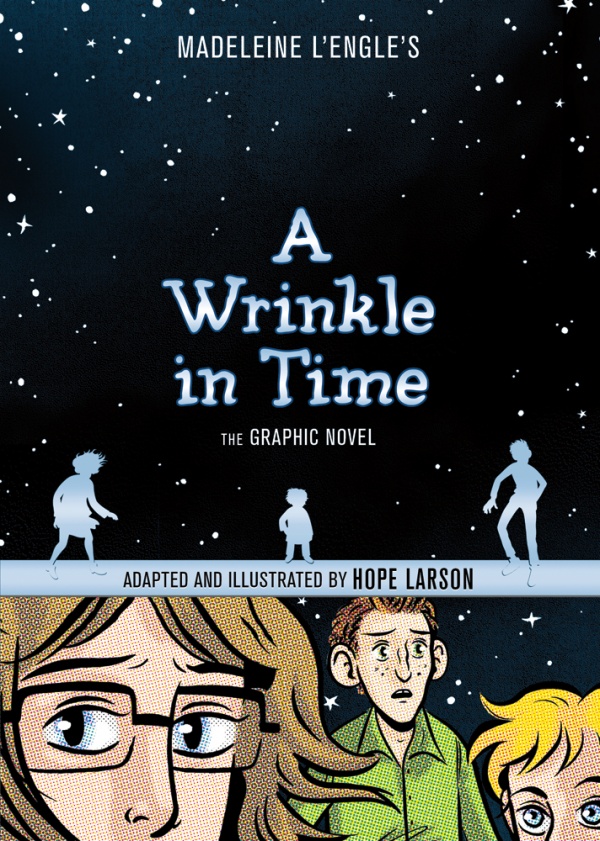 Title: A Wrinkle In Time: The Graphic Novel

I love graphic novels, but I’m usually embarrassed to be seen in public with them. Not because I have some kind of comic book shame, but because they are often super pervy. Luckily, this cover is legit, and I would not be embarrassed to read it outside of my living room.

But I never walk around with the dust jacket on, so let’s inspect the inside, shall we?

I love this even more, especially the fact that the embossing in the corner is a send-up to the awesome original cover.

Meg Murry is not good at fitting in. Her classmates think she’s super weird, and despite being the intelligent daughter of two brilliant scientists, her stubbornness and independence has always prevented her from performing well at school. And since her father has mysteriously disappeared without a trace, things have only gotten worse.

Then one stormy night, her baby brother, Charles Wallace, introduces her to a odd old lady, Mrs. Whatsit. Before she understands what is happening, Meg, Charles Wallace, and their new friend Calvin are being taken on a trip across time and space to rescue their father from a strange, dark force.

Show me a L’Engle character who doesn’t deserve a BFF charm and I’ll show you Mexican food in Scotland (spoiler: there isn’t any). Meg is a BAMF, Charles Wallace is totes adorbs, Sandy and Dennys manage to be cool despite their stupid names, Calvin is a dreamy, dreamy nerd, and I want to go out for intergalactic drinks with Mrs. Who, Mrs. Which, and Mrs. Whatsit. EVERYONE IS MAGNIFICENT.

Meg and Calvin have some sweet moments, but I think the greatest source of swoon in this story comes from the Murrys Senior. Mrs. Murry is a fucking CHAMP. That woman has to deal with single-parenting her weird, bullied children while the whole town is gossiping about how her husband left her for another woman. Meanwhile, her husband has actually disappeared in some top-secret government science experiment, yet she has no idea where he has gone or how to find him again. And yet, she must put on a good face for her children. But just the smallest cracks in that facade create a powerful but subtle longing, strong enough to bump the swoon up to a five.

Sometimes, classic works of literature get turned into graphic novels and something doesn’t quite translate. The original text gets muddled and truncated in ways that the artwork can’t quite make up for, and like a bad movie adaptation, the result is a lazy, confusing mess. Luckily, that was far from the case here.

I haven’t read A Wrinkle In Time in about fifteen years, but I had absolutely no trouble following the story this time around. Better still, I never felt like I was reading a graphic novel adaptation of A Wrinkle In Time, I was simply reading A Wrinkle In Time in a new medium. Perhaps someone who has read the source material many, many times might lament the loss of a line of text here or there. Personally, I think this version just serves to enhance L’Engle’s already-perfect writing.

I read a lot of graphic novels, but lately most of them seem to involve anatomically implausible women. I’d forgotten how great GN art can be. This book made me remember why I started reading graphic novels in the first place. Larson’s illustrations are a breath of fresh air in a world of creepy cartoon boobs. Take this panel for instance:

There’s so much in just one panel! Dialogue that moves the story forward, insight into Meg as a character, and the punchline of a joke. I also love the blue, black and white color scheme that runs throughout the book.

I’m generally a big fan of time travel stories, but I extra love that L’Engle gets into the mechanics of time travel. It’s an added bonus that Larson’s visual representations of time travel are really cool. I spent a lot of time wondering how she arrived at some of her artistic choices, like “how will I attempt to convey four or more dimensions in a two dimensional drawing?”

We love us some Charles Wallace at FYA, but he is EVEN BETTER in cartoon form. Just look at those adorably giant eyes!

This book and I had a whirlwind romance about a month ago, and we fell madly in love. Sadly, I had to leave it behind in DC and move to Europe the next week, but I know that we will wait for each other. The whole continuum of space and time could not keep us apart. I know that all the ladies back home will be trying to tap that, but Megan no h promised she would keep an eye on my book for me. Unless… OMG WHAT IF MEGAN AND THIS BOOK ARE HAVING AN AFFAIR BEHIND MY BACK?! I knew I shouldn’t have trusted that hussy.

FTC Full Disclosure: I received my review copy from First Second Books. I received neither money nor cocktails for writing this review (dammit!). A Wrinkle In Time is available now.