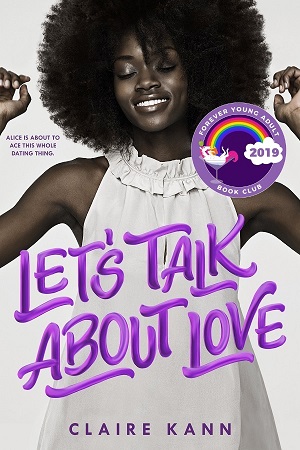 A joyful and radiant Black girl on the cover of a book? HELL. YES. And that tagline! I could nitpick about the dress (top?), but you know what? She’s rocking it anyway.

After getting burned too many times in relationships — most recently when she (sort of) confessed her asexuality to her now ex-girlfriend — Alice is done with dating. She’s just going to live with her best friends and work at the library over the summer after her freshman year of college. But then she meets Takumi and develops full-blown, all-consuming feels for him. As the two of them grow closer, will Alice risk her heart again for the possibility of finally being in a relationship on her terms?

Sometimes you find a kindred spirit in the literary world, and it’s like OMG YOU ARE SEEN. Alice and I have so many common interests (read: fave TV shows), as well as common bad habits like hiding from problems. She had me saying “It me” so much that I wondered if I should be worried that I find a fictional character ten years my junior to be so relatable. (The answer, of course, is NAH.)

It’s rare for a love interest to reveal themselves as off-putting as Alice’s ex-girlfriend, Margot, does in a scant five pages, but she pulled off the feat anyway.

Luckily, Takumi fares phenomenally better; he’s cut, he cooks, and he even shatters Alice’s patented “Cutie Code™” for assessing, well, cuties. And they meet through working together at a library, SWOON. Although I do have a little side-eye for the four-year age difference when one person is a still teenager and the other is not (19 and 23). However, a reference to Black women and Asian men being ranked lowest in online dating made me realize that the central pairing of the book—the potential couple that’s serving up the butterflies—is defiantly refusing its status as the most ‘undesirable’ combination, which is pretty freaking rad. And if anyone thinks that having a protagonist who’s uninterested in sex precludes the story from being swoonworthy: Well, you’d be very, very mistaken.

Talky Talk: Let’s Give Them Something To Talk About

Dreamy and romantic, Kann’s prose deftly balances lightness and substance. When I wasn’t swooning or fist-pumping in agreement, I was probably snorting with laughter ’cause this book has plenty of LOLZ, too. (Parenthetical statements are also liberally deployed, of which I obviously approve.)

Alice’s personal experience shows how both asexuality and bisexuality coexists for her, as well as demonstrate the unfortunate lack of understanding that can happen when people don’t know what it means to be with somebody who’s ace. Plus, the cast of characters is racially diverse, with white characters actually being the minority. In fact, I can’t even recall any significant white dudes in the book.

No, not the subsection of grownup romance novels starring early 20s-ish characters. That has its own appeal and audience, but I’m talking about a slightly more mature version of Young Adult that deals with navigating roommates, frat parties, and scary career choices that’ll dictate the rest of your life, as Alice is doing so in college.

Alice has always third wheeled harmoniously for her lifelong best friend, Feenie, and Feenie’s boyfriend, Ryan. But that dynamic is shifting, between Takumi entering the picture and Feenie and Ryan planning for their future together as a couple.

A certified TV aficionado, Alice writes lengthy essays about her favorite fandoms and ships for fun. Her tastes also skew a little further back in time aka perfect for those of us a little less Y and a little more A (which I’m choosing to attribute to the influence of her much older siblings). Alice, can we hire you at FYA?!?!

Sigh, THIS BOOK. Try as I might to keep a level head, it didn’t take long for me to be a goner. And now I want to tell it to everyone that I know: HEY, FRIENDS—let’s talk about how much I love Let’s Talk About Love.

FTC Full Disclosure: I received my free review copy from Swoon Reads. This review was originally posted on Kirkus Reviews in exchange for monetary compensation, which did not affect or influence my opinions. Let’s Talk About Love is available now.