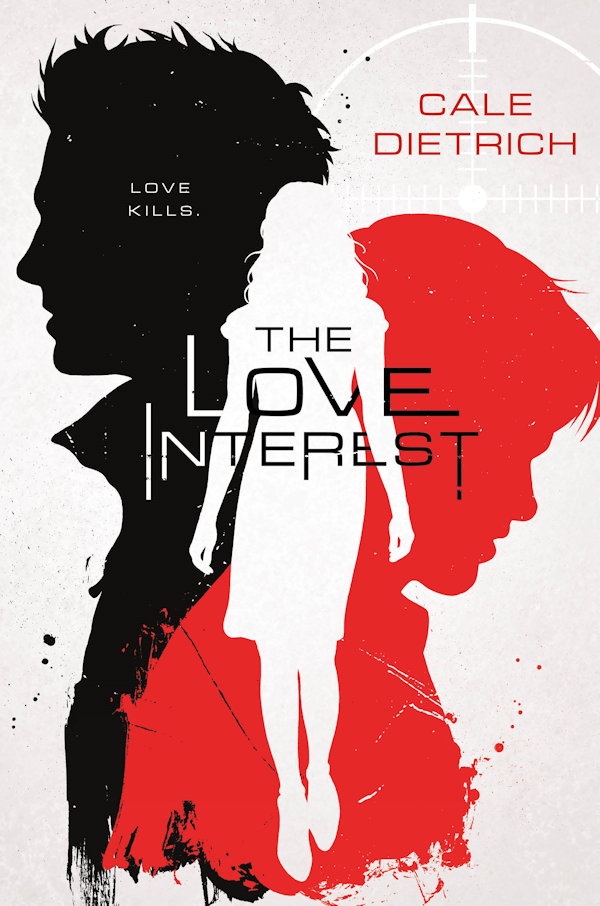 This is a fun, graphic-y cover that would’ve been perfect for the book that I hoped this would turn out to be. It evokes ‘80s spy thrillers of yore while also hinting at its YA elements. It’s letting you know it’s not like a regular YA novel; it’s a cool one.

Over the last few centuries the Love Interest Compound, a ultra-secret spy organization, has existed to mine the private information of influential people and sell it for a price. In order to do so, they train spies (known as Love Interests) from infancy to perfectly mold themselves into whatever their assigned target wants. In order to maximize a love connection, two Love Interests are often pitted against each other to win their intended’s heart. If you win, you can live out your life in relative freedom at the side of a powerful mover and shaker (aside from the fact that you are lying to them every waking moment). But if you lose…well, the LIC has these things they call Stalkers: faceless robots capable of tearing the head off a human in one move. I’ll let you play that out to its conclusion.

Caden is a Nice competing against Dyl, the Bad. Their target is Juliet, a teenage genius inventor who has the capacity to one day be an unstoppable scientist. But even though Caden has to play nice, he knows his life is on the line, and that knowledge can make anyone turn a little bad. And it’s also difficult to stay tough when you’re competing against someone as perfectly handsome as Dyl…

Caden has spent his whole life stuck in the Love Interest Compound where he learned about “our” world from books and movies and where one of his biggest concerns is how he fills out a t-shirt. If he showed up to befriend me—yeah, it’d be flattering because I would have obviously done something of merit to warrant the need for someone to unearth my darkest secrets for profit, but, also: he’s there to unearth my darkest secrets for profit. Sorry I can’t drool over your perfectly defined abs while I’m running far the hell away from you, Caden.

Caden’s big secret is that he feels more like a Bad than a Nice, but the LIC determines he has the good boy looks and is excellent at playing a bland doormat. Yet, honestly, Caden is pretty basic even when he isn’t putting on a show, so he’s way nicer than he thinks. I feel for his situation—he’s basically a high-class prostitute—but, no, sorry, we will not be exchanging friendship bracelets any time soon.

Anything between Caden and Juliet is going to have a level of ick to it, since he’s paint-by-numbers seducing her, complete with his relationship coach, Kaylee, feeding him lines through an implanted brainwave communication device. He hopes that he will eventually feel something real for Juliet, despite his lies, since that will make that whole “stay with this person for the rest of their life” thing much easier to deal with, but the person who really makes his pants twitch is Dyl, who Caden can’t be sure isn’t just messing with him to throw him off his game.

The exploration of Caden’s sexuality should’ve been sweet and intriguing and heartbreaking (being forced to care about a person he will never want), but I couldn’t muster up enough concern about any of the cardboard cutout characters for this storyline to have an impact on my heart.

This concept was a lot to live up to, there’s no doubt. I was hoping for subversion of the classic YA love triangle trope; a little parody, a little poking fun, all wrapped up with some fun and a unique spy twist. Sadly, though, the book couldn’t figure out what it wanted to be, and it suffered for it.

My biggest issues were the lack of details and the execution. The explanation of the Love Interest Compound never felt grounded enough in reality to pull off such a crazy concept; the whole idea of the organizaton is mentioned and explained away as simply being around for hundreds of years. But who started such a thing? Who is buying this expensive information (especially if all the famous and high-powered people have their own spying Love Interests), and what are they actually doing with it? I needed something concrete to sink my teeth into.

And maybe that could’ve been okay if the plot and characters were compelling enough, but once Caden and Dyl met Juliet it became like the blandest contemporary YA novel I could think of. The dialogue did not feel authentic—at one point Caden and Juliet actually utter the phrase “For realsies” during a serious moment and I cringed so hard—and characters were often explaining their entire thought process/feelings way too much, making it quite unbelievable that anyone would be so honest, especially in a love triangle situation.

Caden has never had the time or inclination to fully explore his sexuality, so it’s a bit of an adjustment when he realizes he would much rather stare at Dyl’s chiseled jaw than Juliet’s eyes, lips, boobs, anything…

The author adds a great moment near the end of the book where Caden puts the kibosh on a character trying to make him their “gay friend”, but to say any more would be too spoilery.

Relationship Status: I Choose Me

This story doesn’t explore the option of what happens when both the Nice and the Bad are passed up in favor of someone else or the choice to be alone. It’s probably not a pleasant outcome (what with those death robots on standby), but I have to remain true to myself, Book, and my heart is telling me that you aren’t the one. I’m sorry, but I need time to myself to figure out what I want. Best of luck.

FTC Full Disclosure: I received my free review copy from Feiwel & Friends. I received neither money nor peanut butter cups in exchange for this review. The Love Interest is available now.