The covers for this series (collection?) are some of my favorite of all time, and the latest for this book is no exception. There’s always a lot going on, but I love how fierce the women look, and the combination of the brightly colored, large sans-serif fonts and the handwritten notes are just *chef’s kiss*. I want to have all of them face-out on my bookshelf, lack of space be damned.

My Calamity Jane (like its predecessors) is divided into three POVs: Jane, Frank, and Annie. Through their perspectives, I got to know a lot about each of them and fell in platonic love with all of them. Jane’s no-nonsense but surprisingly fragile; Frank’s charismatic but level-headed; Annie’s sweet but supremely confident to the point of being egotistical. I don’t know if they’d accept my BFF charms, given their tight-knit relationships and dislike of putting normal folk in danger—except for Annie, who makes best friends everywhere she goes—but I’d sure want them to!

Although there are a couple of blossoming relationships in My Calamity Jane that are quite sweet—and one that might be unexpected, given the historical setting—the swoon level is somewhat limited by the particularly formal era.

Hand, Ashton, and Meadows have made a name for themselves with the Lady Janies series, and that name is Awesome. Like, I want to hang out with the three of them on the reg, but especially when they’re writing together. My Calamity Jane doesn’t depart from the template the authors three set up in My Lady Jane and My Plain Jane, and we readers are all the better for it. These books are smart, funny, and informative (even if the history in them has been altered for plot purposes) and just a ton of fun to read. I once again found myself reading passages out loud to my husband and laughing heartily at various jokes. I really wish this weren’t the last in the series!

Jane is the kind of woman who’d rather wear “men’s clothes” for comfort and moveability purposes, and I can’t blame her. She often gets mistaken for a man, too, which doesn’t bother her; as we all know, men—specifically white men—had/have it easier. But there’s another character in My Calamity Jane who takes things one step further and dresses like a man and has a male persona because she’s taken more seriously in her career when in that guise. Smart move, but it stinks that it’s necessary.

Super problematic though they were, wild west shows were the hottest things in the late 1800s/early 1900s. I appreciate the depiction of Wild Bill Hickok’s Wild West show in the book, as it’s a show that doesn’t include stereotyping of any indigenous people (minus some of Jane’s fictional claims to fame, but she changes her mind on some of that by the end of the book) and gives women a chance to shine.

They’re not exactly the stars of the show, but their inclusion in My Calamity Jane sure does add levity to a book that could have otherwise been quite heavy, given the time period. (But it would have had to be a totally different book by different authors; the Lady Janies books are decidedly unheavy, even when they do get a little serious.)

There’s a mother in My Calamity Jane that’s downright awful. And I have to leave it there, or else I’d be getting into spoiler territory.

I’m no good with either a gun or a bullwhip, Book, but I’d love to be a part of your crew. In the book, the authors expressly mention that the term “groupie” hadn’t yet been put into use in 1876, but that’s for sure the relationship I’d like to have! They’re not direct prequels, so you don’t have to have read them to read My Calamity Jane, but do yourself a favor and read My Lady Jane and My Plain Jane if you haven’t already. 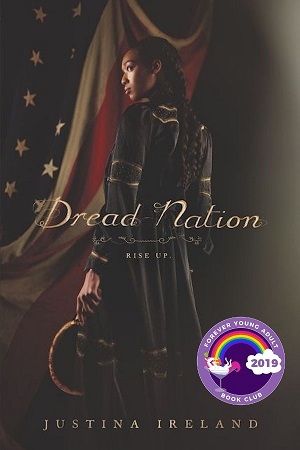 Justina Ireland’s Dread Nation series is another historical fiction western, but instead of werewolves, the heroines—one of whom’s name is Jane!—battle zombies. And it’s got a much different vibe, but Stacey Lee’s Under a Painted Sky has a similar western feel—also with gender bending!

FTC Full Disclosure: I received a copy of this book from HarperTeen, but got neither a private dance party with Tom Hiddleston nor money in exchange for this review. My Calamity Jane is available now.