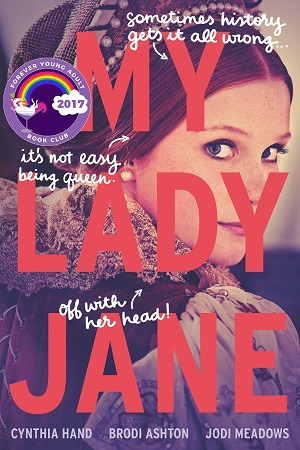 This cover is a little bit Big Face, a little bit Fancy Dress, and whole lot of Instagram Filter, but I … love it? The cover model is gorgeous, and the title treatment is fab. Plus, the handwritten notes are totally cute, and fit in well with the novel (and the novel’s chapter art).

(Also, the book’s MC would be totally impressed at my use of such a big word.)

As long as she has a stack of books nearby, Lady Jane Grey is content to live out her life unmarried and in private. But being the cousin of England’s King Edward VI means that she occasionally has to do things she might not want to do, and the latest situation she’s facing is a doozy: The king is dying, and has chosen Jane’s heirs as his successors. Thing is, Jane’s not married—meaning no male progeny—and Edward’s health is rapidly failing (possibly through no fault of his own or any illness, if you know what I mean).

It’s a good thing Jane and Gifford Dudley (son of Lord Dudley, the King’s most trusted advisor) have no plans for Saturday night.

Jane is an extremely intelligent, sharp-witted young woman with a deep-seated love of learning and books. She’s a forward thinking feminist at a time when women were seen as little better than pretty pieces of art or breeding stock. She’s willing to get her hands dirty, and realizes that her privileged upbringing affords her many opportunities that most other people in England couldn’t even imagine. She’s not afraid to speak her mind, even to the King of England. Basically, she’s amazing. And everything I’d want in a BFF.

Edward and Gifford—”call me G”—on the other hand, aren’t nearly as cool as Jane. They’re not terrible, by any means, but they are men in an age where men think they’re better than everyone else (*tugs at collar*). Thankfully, they’re willing to admit when they’re wrong, and strive to overcome generations of conditioning. If they tagged along while Jane and I hung out, I’d be OK with that.

When they first find out about their impending nuptials, neither Jane nor G want anything to do with each other. G thinks Jane’s insufferable and too bookish—which, rude, that’s not a thing—and Jane thinks G is a useless and promiscuous lordling. (There’s also the fact that he spends all daylight hours as a horse, but more on that later.)

However, because they’re loyal to both their country and their parents, they’re willing to go through with the marriage. And as they get caught up in the plot against Edward, they begrudgingly work together and (natch) find that first appearances and impressions can be deceiving.

No one in the book gets drunk (well, except for that one time), and I’m assuming that Cynthia Hand, Brodi Ashton and Jodi Meadows weren’t drunk while writing,* but My Lady Jane reads a little like an episode of Drunk History. And I mean that in the best of ways.

If you’re not familiar with the series, it’s pretty self-explanatory: people (often celebrities) get drunk and try to explain bits of history. It’s both highly entertaining and pretty educational. The same can be said about My Lady Jane. The book’s story is based in historical events, but the authors have taken it upon themselves to expand on and change history in hilarious and heartwarming ways.

One might think that a book with three authors could get confusing or convoluted, but Hand, Ashton and Meadows totally pulled it off. The chapters of My Lady Jane switch between Edward, Jane and G’s POVs, and I assume that each author wrote one character. However, all three characters’ personalities are unique and together they form a cohesive whole. I can imagine a number of ways such a cooperative idea could have gone wrong, but these three authors obviously have an excellent relationship and that comes across on the page.

The book is also delightfully quippy and filled with little “notes” from the narrators, which frequently made me laugh out loud. I knew I was in for a treat as soon as I read the dedication:

For everyone who knows there was enough room for Leonardo DiCaprio on that door.

And for England. We’re really sorry for what we’re about to do to your history.

One of the ways Hand, Ashton and Meadows made this historical novel their own was by introducing the idea of “Eδians” (pronounced eth-ee-uns), or people who can shapeshift into animals. In My Lady Jane, it’s a well known fact that Henry VIII could take the form of a lion, and G spends his days as a horse. (Some people can control their changes better than others.) In the book, the struggle between Eδians and Verities—individuals who can’t shapeshift and see the ability to do so as an abomination—takes the place of the true historical disagreements between Catholics and Protestants.

Jane loves books, and takes them with her wherever she goes—even to balls.

There was nothing she relished more than the weight of a hefty tome in her hands, each beautiful volume of knowledge as rare and wonderful and fascinating as the last. She delighted in the smell of the ink, the rough feel of the paper between her fingers, the rustle of sweet pages, the shapes of the letters before her eyes. And most of all, she loved the way that books could transport her from her otherwise mundane and stifling life and offer the experiences of a hundred other lives. Through books she could see the world.

In this, I think we can all agree that Jane is a kindred spirit.

I wasn’t familiar with the story of Lady Jane Grey before reading My Lady Jane (TL;DR: she was Queen of England for nine days from July 10–19, 1553, and was later beheaded thanks to trumped up charges of treason), and I’m still not fully familiar considering this book is a work of fiction, but I do feel like I come out of reading this more informed than I was before.

On occasion, I wanted to punch Edward (an on a lesser note, G) in his kingly face for the opinions he holds about women. But, thankfully, the authors never excuse his behavior, and even go so far as to make him realize his way of thinking might not be the best way.

I didn’t realize how much I wanted to read a hilarious fictionalized account of an actually quite sad time in England’s history until we met, Book, and you swept me off my feet within your first few pages. I’m pretty sure I know where this relationship is heading, and I don’t care if anyone thinks it’s too fast to get so serious. My mom is going to absolutely adore you.

FTC Full Disclosure: I received a copy of this book from HarperTeen, but got neither a private dance party with Tom Hiddleston nor money in exchange for this review. My Lady Jane is available now.