Title: Not Even Bones (Market of Monsters #1)

Content Warning: Not Even Bones is a graphic novel (not in the illustration sense) that features scenes of violence and torture that might be triggering for some readers.

Even though I know what the book is about, every time I look at this cover I think it’s some sort of crime thriller with a medical twist. And I suppose it kind of is, but not in the stereotypical sense my brain wants/expects it to be.

There might be something wrong with Nita: her favorite thing to do, the thing that brings her a sense of fulfillment, is dissect the corpses of the “unnaturals” that her mother, a bona-fide monster hunter, brings home. Nita finds peace in the action of dividing up creatures (who often look human, mind you) into their most basic parts. She doesn’t think about them as people, just dead beings that, once sold, will earn her family money.

Until the day her mother brings home a live one, and Nita realizes that there are some lines she just won’t cross. Which is all well and good for her own sanity, but when she’s kidnapped by people worse than her mother, she realizes that not everyone has morals like hers.

There’s something decidedly off about Nita, mostly because of the pleasure she garners in the dissection of others. She’s disconnected from society, and prefers it that way. She’s fascinated by the science of the unnatural creatures that exist in her world. She never sees the specimens her mother brings home as people, until she’s forced to interact with one who’s alive. Her moral compass isn’t exactly working well. But there’s something intriguing about her, and she made for a compelling main character. Would I want to be friends with her, though? I don’t think so.

After pretty much being alone with no one but the corpses (and her terrible mother, but more on that later), Nita finds herself attracted to a questionable character. He’s even more on the dangerous side than Nita is, but there are reasons for him being that way. She’s conflicted about her interest in him, and rightly so. Nothing much happens in this first book, but the chemistry is there and setting a foundation for what might come in the future. (I can’t assume to know what Schaeffer has planned, natch, but there are hints that I definitely picked up on.)

You might think a book about a girl who dissects beings would err on the gory side … and you’d be right. I have a pretty strong stomach for these sorts of things, but Schaeffer would occasionally go into detail about how Nita was doing a particular thing she was doing and my heebie jeebies kicked in hardcore. Additionally, when Nita’s captured, it’s not all sunshine and rainbows for her (or others), and depictions of what happens to her in captivity aren’t pretty. However, never does the violence seem gratuitous, even when it, well, is. Schaeffer doesn’t pull punches in a book that would lose its impact if she did.

They’re not the kind I was expecting, however …

Not sure when more is coming from the Market of Monsters series, but I’m looking forward to reading more books set in this world. There’s so much backstory to explore that Schaeffer wasn’t able to fully flesh out in Not Even Bones.

Nita’s mother is a stone-cold killer, in the worst and most literal sense of the idiom, and doesn’t treat her daughter much better than she treats the creatures she hunts. Nita is terrified to get on her bad side, and lives in constant fear of her mother being in a bad mood. It’s super easy to think the worst of her, from the very start. It’s no wonder Nita’s not exactly socially adept.

Did you make me super uncomfortable at times, Book? Yes. Did even I want to run away before it ended? Yes. But did I also enjoy our time together? Yes. I don’t know that marriage is in our future, but I definitely want to know more about you. 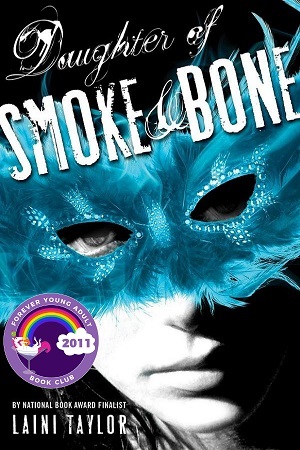 Margaret Rogerson’s An Enchantment of Ravens is another book about a girl who gets noticed—and not in an altogether positive way—for her talents. And for another thriller about paranormal creatures who pass as human, check out Nightingale by Amy Lukavics.

FTC Full Disclosure: I received a copy of this book from HMH Books for Young Readers, but got neither a private dance party with Tom Hiddleston nor money in exchange for this review. Not Even Bones is available now.