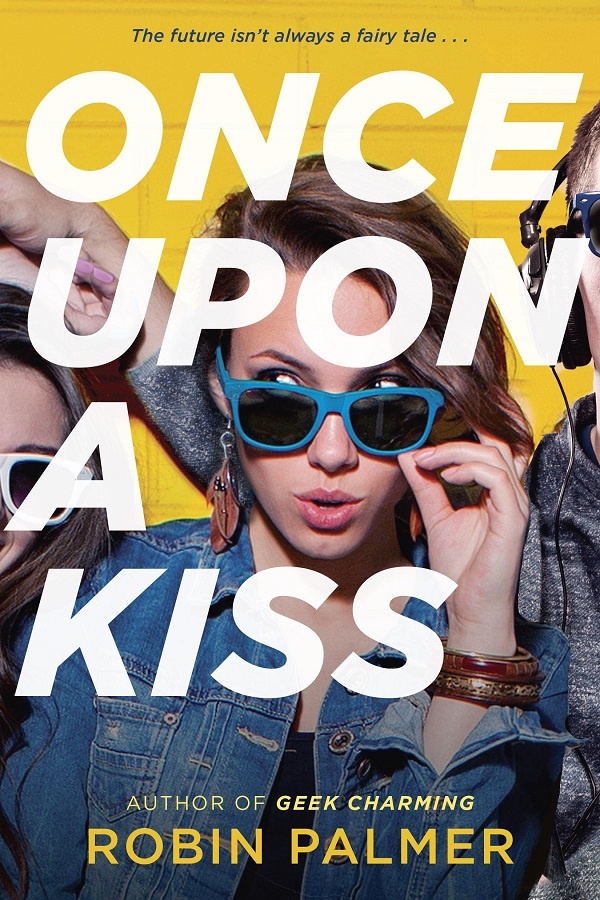 Title: Once Upon a Kiss

It’s not that this cover reminds me of Carrie Bradshaw per se, but its aesthetic makes me think of the short-lived CW show. They both ape ’80s style but look way cuter than anything from the actual ’80s.

The year is 1986. Zoe Brenner is perfectly fine with her social status (or lack thereof), as long as she has her BFF Jonah by her side. But one freak accident later, Zoe wakes up in 2016. While she might be exactly the same, nothing else is: she’s the most popular girl in school, and she isn’t even friends with Jonah — not to mention all the bizarre technology and pop culture references she has to learn to keep up with appearances. Will she ever figure out how to return to 1986?

Look: I get the irony in disliking a girl for disliking other girls, but here I go anyway. Zoe does not like trendy, stereotypically ‘girlie’ things. And that’s fine! But what isn’t fine is hating on girls who do, because they dare to like pink and they’re “dainty eaters” (WTF?). I’m not touting some misguided sense of sisterhood that requires unconditional support — it’s OK to disagree! — but tearing down other girls because their tastes are too mainstream is so unnecessary.

I’d be a liiiiiittle more receptive to Zoe’s ‘I’m not like most girls’ attitude if it was all in service of A Lesson. Zoe does eventually see that popularity can be used for good, but the book never addresses how toxic this ‘girlie’-hating mentality really is. AND I’M TOO OLD FOR THAT SHIZZ, Y’ALL.

In 1986, Zoe and Jonah both insist that their friendship is entirely platonic, but could it be a case of they doth protest too much? (And doth they protest so, so much.) The time jump turns their dynamic upside down, but Zoe’s determined to revive their friendship.

Meanwhile, Zoe also has a boyfriend to contend with in 2016. Brad Bundy might have a sweet side, but he’s definitely not the guy for Zoe… as Zoe herself is quick to point out time and time again how much of an airhead he is. Accurate as Zoe might be, Brad’s comical stupidity isn’t all that comical, and it’s laid on wayyyy too thick.

Talky Talk: Gag Me with a Spoon

A frothy read laden with pop culture shout-outs, this book somehow misses the mark with references in both eras. The ones in 1986 are too prescient and winky (e.g., ‘One day, things will be like XYZ!’), and the ones in 2016 don’t feel topical or believable enough. I mean, do real teens care about Katy Perry right now? I know her Super Bowl performance was only a year ago, but the homepage of J-14 tells me no.* How about name-dropping some Vine or Youtube star who has Olds like me questioning whether they’re actual people or not? And for a time travel fantasy, my suspension of disbelief had to do more heavy lifting at the idea that Drake and Nicki Minaj would be endorsing and appearing in workout DVDs.** (Then again, maybe it’s not such a stretch, since some of their music videos are already like workouts anyway.)

I haven’t read anything else by this author before, but one of her earlier works had been adapted into a Disney Channel movie. Which makes perfect sense to me, since the writing style of Once Upon a Kiss has the subtlety of a tap-dancing orangutan. OK — maybe way harsh, Tai, and it’s not surprising for light fare with a gimmick like this. But GEEZ, does this book like to hammer home its points.

*All apologies to Ms. Perry, but we are of a fickle ‘out of sight, out of mind’ culture. COME BACK, KATY.

**Someone who did release a workout video during the rise of their fame, however: Marky Mark. The more you know!

An unpopular girl in the late ’80s suddenly wakes up as a queen bee in the future, with her nerdy guy BFF and mean girl nemesis swapping places in her new reality. Oh, and she now has a meathead jock boyfriend. This is totally like 13 Going On 30, but without getting to turn into a grownup Jennifer Garner that makes out with Mark Ruffalo. (WHY EVEN TIME TRAVEL, THEN?)

I’ll be honest: I deliberately sought out a light and fluffy hookup to ease me back into my post-holiday routine. (No shame in that game; sometimes, you have a particular itch to scratch, ya know?) This book seemed cute enough at first glance, but DANG — did we ever butt heads when I actually got to know it. So, uh, let’s just leave our brief fling in the past — OK, Book?

FTC Full Disclosure: I received my free review copy from Speak via Penguin Canada. I received neither money nor froyo for writing this review (dammit!). Once Upon a Kiss is available now.