Title: Once Upon a Quinceañera

Cover Story: Made Me Smile

I kind of love this?! The bright colors are so fun, and all the little nods to actual things/moments in the book really tickle me. The only thing that doesn’t add up is that Ariana would NEVER have a cake that simple at her quinceañera; three tiers and sparkle or bust.

Carmen’s summer after high school isn’t going as planned. For one, she didn’t actually graduate due to an unfortunate incident regarding her senior project. So now she must don Belle’s ballgown and entertain sticky children while she works on her a different final project for summer school. At least she’s getting to spend her time working alongside her best friend, Waverly, before she leaves for college, right?

Except the universe is determined to ruin all of Carmen’s potential fun, because the Beast to her Belle is none other than Mauro Reyes, the boy who betrayed her trust and broke her heart during freshmen year. The boy whose wild house party (which, regrettably, had involved her younger cousin, Ariana, and some alcohol) was the direct result of a major fight between Carmen’s mom and Carmen’s aunt—a fight that has kept her family from speaking to each other for almost four years.

I completely sympathized with Carmen’s lack of direction and the anxiety of the unknown that looms in front of her as she faces down adulthood. She’s not sure if college is for her, because what would she even study? Is it smart to even try to turn your passion into your career? She’s also dealt with things in her life that make her slow to trust and open up, and when she looks at her aunt Celia’s rich husband and her spoiled cousin, she practically glows green with envy. So I get why Carmen is the way she is, but that doesn’t mean I still didn’t want to shake her shoulders every now and then and tell her to stop comparing herself to others; to be happy with all the strengths she does possess. Because, Carmencita? You’re actually pretty awesome.

Carmen has closed herself off from feeling anything too real since Mauro, but she has her eye on someone she views as sweet and very un-Maurolike: Alex, a hot soccer player she’s crushed on all year. Their situation is one part that, the way it was written, confused me (see more below). I can’t tell if how I was supposed to feel was because Alex was just kind of a jerky person or if it was the lack of clarity in the writing. And course, the real thorn in Carmen’s side is Mauro, who seems to have grown since the “incident”. Carmen’s confusion and hesitation over trusting him is understandable…if not always the most fun to read about because, as an outsider, it seemed to me he was genuinely remorseful.

As a debut author, Gomez-Hira’s writing was accessible, and her story easy to fall into. While I haven’t spent an extended amount of time in Miami, I have been on a few occasions, so it was fun to see places I know mentioned, and it felt like she nailed the vibe. I also loved the Latinx representation and learning more about how quinceañeras vary in different cultures (that was more my own deep dive into it versus the book explaining, but, what can I say, it peaked my interest!).

I did struggle with the pacing near the middle/final third of the book, as well as whenever any relationship drama set in, be it between Carmen and her family or her love interest. Sometimes the arguments about who did what/when/why and the points it seemed the characters were trying to make had me tangled up. I found myself needing to reread passages, and even then I wasn’t sure if I was catching the characters’ actual meanings. Sometimes it felt like I was supposed to know more about the past events than was possible, since we never get a full flashback to Carmen’s freshmen year when all the drama actually went down. Hopefully those are minor writing quirks that will be improved with practice and time, as overall I found Gomez-Hira’s voice to be fresh and fun.

The Biltmore Hotel, the venue that hosts Ariana’s quinceañera, is a real place and real fancy. I imagine Ariana’s father probably spent a wedding-sized fortune on the event. While I’ve never been someone who cares about coming-of-age parties (I have never watched an episode of MTV’s My Super-Sweet Sixteen, and I, personally, would HATE all that attention on me), count me in as someone who would’ve loved an invite to Ariana’s shindig to peep at all the glitz and glamour.

If you’re someone who loves watching random videos of wedding parties dancing, then allow me to introduce you to the world of bailes sorpresa (from the comments this one sounds like it’s actual dancers from a studio during an expo, but like, are they showing off that they would be teaching you and your friends this dance?! What do you do if you have friends who aren’t coordinated? I guess, like Ariana, you can always hire professionals!) (Also: that girl’s dress? Those sleeves! I die.) It seems like the most traditional dance is a waltz, but people are doing all kinds of choreographed numbers nowadays!

One of Carmen’s secret passions is making fan videos of her favorite TV shows to highlight couples she wishes were together or change the stories to how she wants them to be. Editing together the right clips with the perfect songs gives her intense satisfaction. While I’ve never done much video editing, I do know that satisfied feeling when you find the perfect song for a photo slideshow, and I’ve definitely watched my share of fandom videos, good and bad.

With the way the book is written, I hope I’m not spoiling anything to say that it’s pretty clear the goal is to reconcile Carmen/Carmen’s mom and their estranged family. But, like…they’re kind of awful? My confusion over what happened at Mauro’s party years ago compounds my mixed feelings about Ariana, who was very hot and cold with Carmen. Not to mention Tia Celia’s horribly petty behavior to her teenage niece and sister over and over. I was probably being overly petty myself, but I was rooting for Carmen to tell these people to heave-off and go thrive drama-free without them…

I’m not ready to commit to being a one-book woman, Book, but I liked our time together. I’d be willing to try out another date (maybe more dancing?) to see where this could lead. 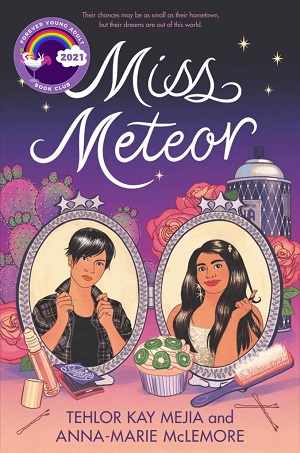 Anna-Marie McLemore and Tehlor Kay Mejia’s Miss Meteor is a more fantastical (and adorable!) contemporary that also features characters whose friendship broke down after a misunderstanding. The Truth About Happily Ever After

If you want more about that transitional time between being a teen and being an adult while also having to wear a fancy ballgown, check out Karole Cozzo’s The Truth About Happily Ever After. For another story that tackles family relationships, complicated friendships, and finding your passion and sense of self, go read Julie Murphy’s Puddin’.

FTC Full Disclosure: I received my free review copy from HarperTeen. I received neither money nor peanut butter cups in exchange for this review. Once Upon a Quinceañera is available now.