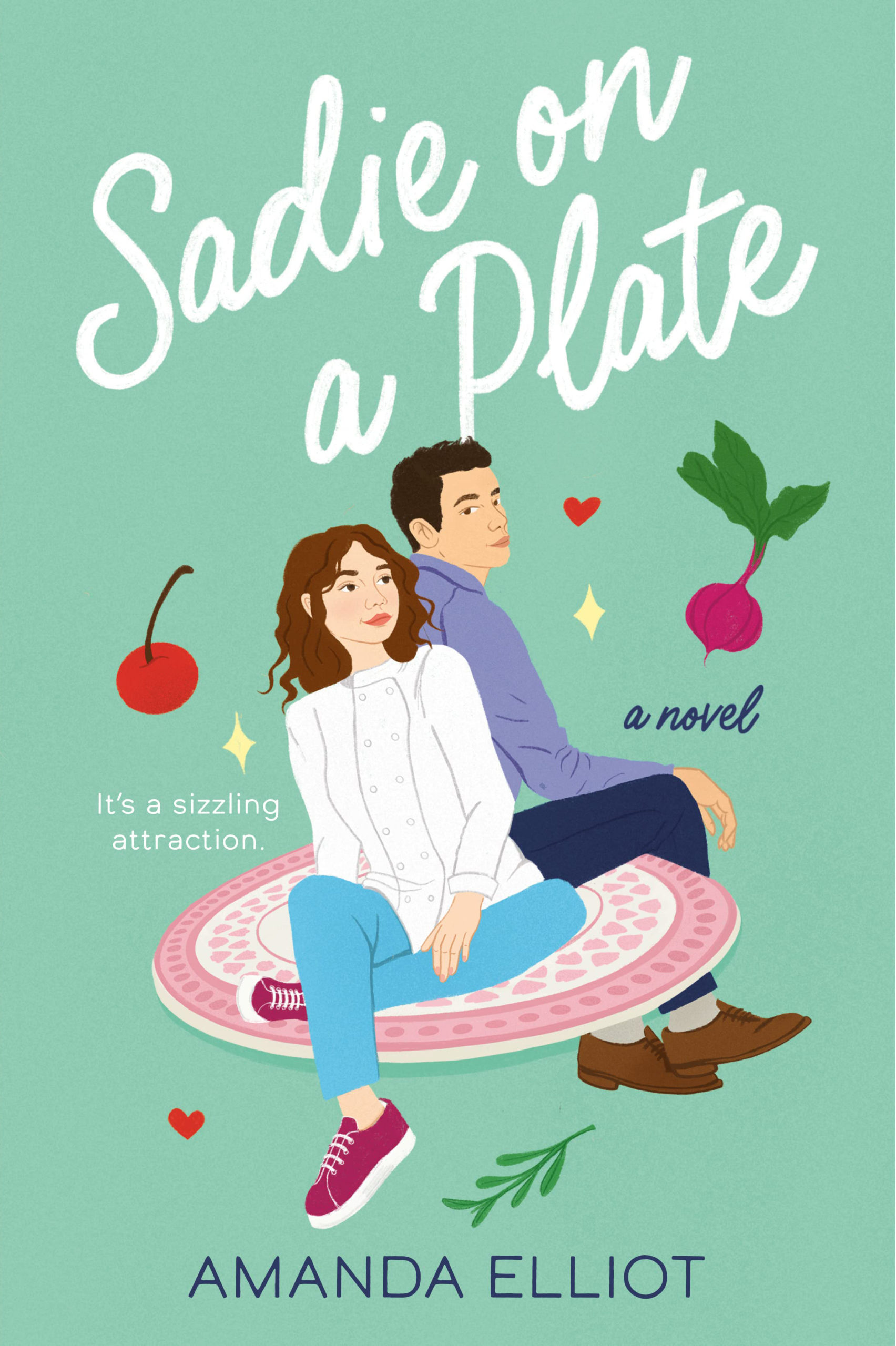 Title: Sadie on a Plate

First Impressions: Have We Met Before?
What’s Your Type? Forbidden Romance, Chefs, Workplace Romance, Cooking Competitions, Tasty Business
Meet Cute: Flight Risk
The Lean: Forbidden Foodies
Dirty Talk: Not on the Menu
We Need to Talk: More Tasty Business than Sexy Business
Was It Good For You? Needs More Spice

Fancy seeing you here, cartoon cover. Like the millions of cartoon covers that have come before it, this cover is cute. It’s inoffensive. It’s most unique feature is that it contains a beet. There is absolutely nothing wrong with it except that I’ve basically seen it a million times before.

Despite her reputation as an up-and-coming Seattle chef, Sadie has to skip town. After a public, humiliating break-up with her famous chef boyfriend, she’s been blacklisted from the Seattle restaurant scene. So she’s taking her creative spin on traditional Jewish cuisine to New York City, where she’s been chosen as a contestant on the cooking show Chef Supreme. Winning Chef Supreme would mean a chance to have her own restaurant and cook on her own terms.

But when Sadie meets fellow (sexy) chef Luke on the plane ride to NYC, the two hit it off and spend a magical evening together before parting ways…until the next day when she arrives on set and learns that Luke is also on Chef Supreme. In order to have a chance at a dream career, Sadie has to forget about Luke and focus on winning. But it’s really hard when Luke’s always around being a sexy chef, you know?

When Sadie boards her plane to New York, she does not expect to be seated next to a super hot chef who also loves Chef Supreme. She and Luke spend the whole flight binge watching the most recent season, and after they disembark, they aren’t ready to say goodbye. They spend an incredible afternoon at a Korean speakeasy, but baby girl signed a non-disclosure, so she can’t tell Luke why she’s in NYC…and if he is a fellow contestant on the show, he can’t say anything either. INTRIGUE.

Due to the legalities of being on Chef Supreme, any romance between Sadie and Luke is EXTREMELY off-limits, which, duh, makes them want each other that much more. And now that they’ve had a taste of what romance could be like together, it’s hard not to think about what could be. Unfortunately, every move Sadie makes is being filmed, so her only off-camera interactions with Luke are limited to rushed moments outside the bathrooms.

Dirty Talk: Not on the Menu

If you are looking for smut, this is not the book for you. Sadie on a Plate reads more like a book about a cooking competition with a romance side-plot. Sex scenes are minimal and generally fade to black before things get more than PG-13. But when Sadie and Luke do finally get a moment alone, you can bet there’s food involved.

His fingernails raked their way down my back, making me shiver in the best way. I signed into his mouth, and he growled into mine.

I wanted him. Right now. Right here on this pile of summer squash.

We Need to Talk: More Tasty Business than Sexy Business

While this book lacked the sexy times I usually prefer from my romance novels, there were a handful of aspects that I did really enjoy. I loved that Sadie is Jewish, and her goal on Chef Supreme is to introduce the world to her unique, modernized take on Jewish food. The tasty business overfloweth!

And of course, if you love shows like Chopped, you’re going to love this book. I enjoy a cooking show now and then, but prefer the slower-paced, lower-drama types like Great British Bake Off. Chef Supreme‘s producers and judges kept Sadie and the other contestants on their toes, which means the reader is along for a rushed, frantic ride. Personally, I would’ve liked more time to savor Sadie and Luke’s romance, and less time spent on the other contestants, but the set-up of the story makes that understandably difficult.

Was It Good For You? Needs More Spice

Was this book cute? Yes! Would I call it a romance novel? I guess that depends on your definition of a romance novel, and personally, I prefer a bit more spice. The romance really took a backseat to the cooking competition, and there wasn’t much in the way of sexy business. So if you prefer your rom-coms with more roasted beets than scenes between the sheets, this may be just what you’re craving.

FTC Full Disclosure: I did not receive money or Girl Scout cookies of any kind (not even the gross cranberry ones) for writing this review. Sadie on a Plate is available March 15, 2022.