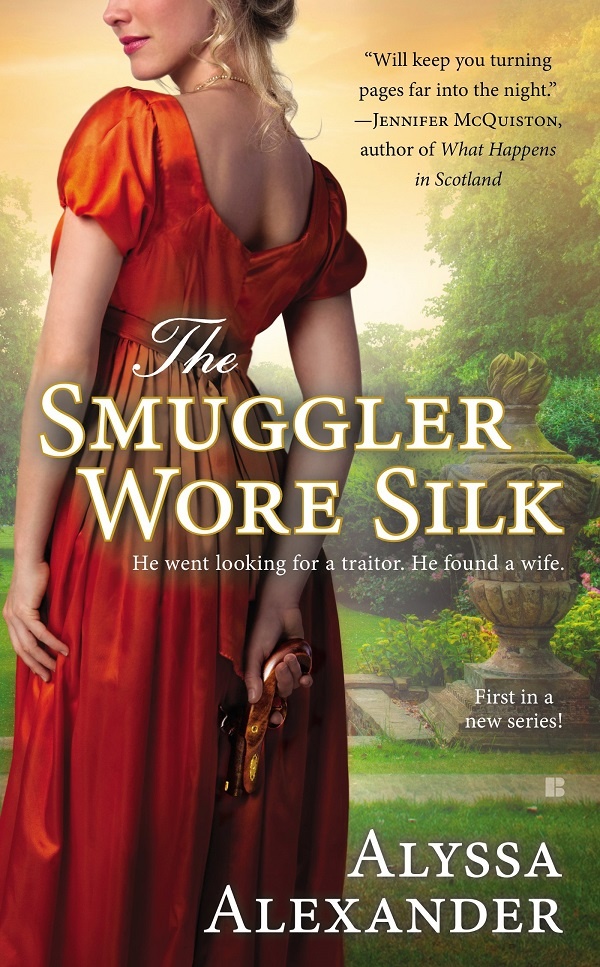 Title: The Smuggler Wore Silk (Spy in the Ton #1)

Is that a gun in your hand, or are you just happy to see me? In any case, nineteenth-century couture is so not conducive to concealing weapons. You can’t use side holsters, or even wear those standard-issue LadySpy sexy thigh holsters underneath a petticoat.

And do you really need your finger on the trigger when the only thing you can shoot is literally your own foot? But more distressing: looking over your shoulder when you’re holding a gun behind your back. Element of surprise: you’re doing it wrong.

So hey, historical romance makes me want to barf far less! Although the trade-offs are words like ‘bosom’, which makes me think of Anne Shirley. Or Tom Hanks. Either way, it’s not a name association I want with romance books. (And now, let’s take a moment to stop picturing Anne Shirley and Tom Hanks and bosoms together. Worst fan fic EVAR.)

But with my limiting vocab tolerance for flowery language, the eye rolls and judgmental glares are still plentiful, due to instances of:

Julian Travers, Earl of Langford, is a spy desperate for One!Last!Mission!. His identity has been compromised abroad, so his new mission is a broad (see what I did there?): to investigate Grace Hannah, tarnished doomed-to-be-spinster and suspected smuggler (who wears silk) of military intel to France. Loose lips may sink ships, but they’re perfect for lovers.

It just so happens that Julian’s family estate in Devon is only a few miles away from where Grace lives with her uncle — how convenient!

When the prodigal son returns home for the first time in a score, he finds a fetching young woman helping the caretaker’s wife in the kitchen.

Two derrieres bobbed side by side. […] The second, however, had slimmer hips with a bottom that was lush and rounded, and clad in a light wool riding habit that pulled tantalizingly against the curves it covered. […]

After being caught together in a compromising position — tongues “[darting] in, [stroking]”! — Julian decides to salvage Grace’s already low reputation by saying that they’re engaged. But much like an STI outbreak, their fiery loins refuse to be contained; Julian and Grace give into their unbridled passion before their wedding night.

Are They Animals In the Sack?:

Y’all, my favourite thing about historical romances just might be the absence of vulgar genital slang. Then again, it’s replaced by things like hymen euphemisms:

She was gasping, nearly undone when he finally slid into her. Wrapping her arms around him, she opened, took him in.

All that sliding into the promised land — you know you don’t have to take the baseball metaphor so literally, right?

Not only are there euphemisms aplenty, but there are innuendos.

“I look forward to seeing your garden in its entirety.”

And good to know that the cheesy pickup line isn’t just a recent invention.

“What did you ride?” he asked, turning smiling eyes towards her. “[…] Or did you use your own exquisite wings? For surely only an angel could be so beautiful.”

Nor is role play, apparently.

“Tell me of your fantasies, then. Where are the smuggling captain and his consort sailing now?”

“Today, she’s not consort. She’s a Scottish maid, tall and lithe and strong. High into the hills of Scotland he takes her, where the air is clear and sharp. […] He would gather purple heather from the fields and make a bed under the trees.”

(… although they seem more concerned with the furnishings than, y’know, the seckin’.)

“I don’t believe I’ve met a lady that would ride a stallion.”

“Such ladies are rare, I’m sure.” She tilted her head, met his gaze. “But she only needs to know how best to handle the stallion.”

Bish, please. You are so not the stallion who mounts the world.

No joke, y’all — I spent HOURS transcribing all the potential candidates for this illustrious honour. I had to cut most of it out, so just know there’s plenty more where this came from.

The mission hung before him, plump and ripe and as easy to pluck as any red apple.

This is referring to an actual mission. See what I mean about everything sounding lascivious in Antique Speak?

His mouth was wild on hers, plundering, demanding.

He could see a shadowed figure flitting across the window, then back again. He grinned delightedly when the figure drew off a piece of clothing, revealing the outline of a womanly shape beneath. Regrettably, he was too far away to see clearly, but he glimpsed enough of the curves of breast and hip to know the lady’s shape was pleasing.

And a Peeping Tom, too! (Form a line to the left, ladies!)

Here’s the obligatory sexually-charged riding excerpt. (In the interest of brevity, I left out the ankle-leering portion. You’re heartbroken, I know.)

She slid forward until her front pressed against the pommel of the saddle. Even with the additional space, they were fitted together in the same position. She could feel him pressed intimately against her backside, his hard, muscular thighs aligned with hers. The earl’s strong hands curled around her waist as a steadying hold, fingers splayed across her belly. Over it all was the knowledge that her legs were wide open, with his body straddling hers.

There’s also a My Strange Obsession-level fixation with MAN SCENT and ALL THINGS MAN.

She felt the heat of him, and rising with it was the scent of man and leather and outdoors.

The feel of skin against skin was so unexpectedly delicious, the taste of him so utterly male.

But it was the scent that revealed her captor. Man, leather and soap.

He tasted hot and salty and male.

She moaned as the taste of him met her tongue. Man, outdoors, rain. And the essence that was Julian.

Her body still vibrated with pleasure at even the memory of their lovemaking and the sensations of flesh against flesh.

Pardon me while I retch upon retch.

Actually, she was starving. Apparently lovemaking — not to mention a bit of espionage — worked up an appetite.

And I have completely lost mine, after all these quotes.

I know this is set in a different time, but HOLY SHIZZ. If I had to live back then, I’d probably be burned as a witch for all my Lady Rage.

Grace isn’t in the best social standing because of a broken engagement — something that her uncle never lets her forget.

“You’re nothing.” He snorted and tossed back the brandy. “Rather, you were nothing. Now you’re a whore.”

You best believe all the whore bombs got my blood BOILING. But at least the uncle is supposed to be a raging jackhole. Unlike, say, the love interest. Here’s his touching proposal via letter.

Please seriously consider your reputation and the consequences of refusing to become my wife.

I would be honored if you would accept my offer of marriage.

Well, when you put it like that, HOW COULD SHE NOT?!

To be fair, Grace isn’t cool with all of Julian’s behaviour, either. But that doesn’t erase all the asshole-y things he says.

“It’s the only answer you’ll get.”

“You don’t need to.” Julian strode to the door, looked back. “You only need to obey.”

“His woman?” Fury leapt in her. She turned to Julian, pinned him with her gaze. “I am not his woman. I’m nothing more than a mistake.”

“You’re still my wife, Grace. I own you. Which means I have the final word.”

Y’all, I really cannot handle this women-as-property bullshit,* even if it’s intentionally awful. I especially can’t handle overlooking that in the name of swoooooon. Ugh.

*I know; easy for me to say from my privileged 21st-century perspective.

For an ugly moment, jealousy streaked through Julian. Was Grace cuckolding him? Was his wife of mere days already a cheat? He closed his eyes, forced himself to think past the pressure in his chest. No. He knew she was not. Certainly not with Jack Blackbourn.

He looked through the window and saw Blackbourn pull Grace into his arms.

The evidence was damning. And I’m just as damned, he thought as the jealousy swelled again.

Again: different times, different societal norms, I get that. But Mr. Paranoid and Possessive here? PASS, with a capital ‘ASS’. No matter what his man scent is.

It was def. a first date fizzle for historical romance and me. Because no amount of hotness — not that this was particularly steamy, though — can make me stop GNASHING MY TEETH at the rampant misogyny, no matter how period-appropriate and negatively portrayed it is. But I’m not quite ready to write off an entire genre because of one iffy experience. So I’m open to suggestions for my next historical romance flirtation if y’all got ’em!

FTC Full Disclosure: I received my free review copy from Berkley. I received neither money nor froyo for writing this review (dammit!). The Smuggler Wore Silk is available now.