I like it when an author finds a cover style she likes and goes with it. This and Uprooted aren’t in the same world (I think?) but the feel is similar, so the cover style goes along well. Do I love this particular cover aesthetic? Personally, no, but it could be a lot worse.

It all begins with a poor, Jewish family in a tiny town that wouldn’t even appear on a map. Miryem’s father is too tenderhearted for the moneylending business he married into, unable to collect on debts even when his family is about to starve. Miryem refuses to let her mother’s cough get any worse, so she hardens her heart and goes door to door collecting what is owed to her father.

And it works. Miryem is scary-good at balancing the books and staying firm in the face of excuses and rudeness. Her family begins to flourish, even as they worry her job may be ruining her soul. Perhaps they have a right to be concerned, because Miryem’s fate comes a-knocking in the form of the Staryk, a magical folk who love the cold, the color white, and kill whomever thinks to take what they consider theirs. They issue a challenge to Miryem: turn their magical Staryk silver into gold or, well, you don’t want to know.

Miryem’s simple act of keeping her family alive put in motion more than she could have guessed; her refusal to be content with her lot in life puts her entire country in jeopardy and permanently changes the lives of two other women: one, a simple farmer’s daughter, who helps Miryem’s family in exchange for her father’s debt. The other, a duke’s daughter, whose interactions with Miryem and the Staryk silver help her capture the eye of the tsar—and something else even more sinister.

This book is chock-full of ladies who become their own taskmasters, who aren’t content to sit around and let life lead them by the hand. I don’t know where I’d fit into this girl group, but I’d be in excellent company regardless. I was super invested in each story and wanted everyone to take a break and have just one night to themselves for a slumber party without all those pain-in-the-butt men imposing their will and killing the vibe.

Miryem’s people have been persecuted and driven from their lands, but she stands proud and takes comfort in her ability to provide for herself and her parents. She can’t waste time on other’s opinions lest she freeze to death.

Wanda must overcome her abusive father and her lack of education to determine what it is she wants out of life (and it’s certainly not a husband who will use her for her dowry and her work ethic, thank you very much). My heart broke for her and rejoiced with her each time she took a step towards independence.

And Irina has lived her life as the plain daughter of an influential and social-climbing duke, always knowing she’s but a paltry tool in her father’s political arsenal. She suddenly finds herself the tsarina to her people and hunted because of it.

The romance, unfortunately, was the weakest part of the story for me (unfortunately because I do so love a good romance, though YMMV). The romances were almost too subtle. There was so much packed into the book that romance took a backseat to the action. It felt like we were supposed to rejoice in certain romantic wins by the end, but I didn’t feel there was enough good build-up to really believe in the pay-off. So don’t run into this expecting a kissing book, is all I’m saying. Managing those expectations now will make for a better journey overall.

Spinning Silver was super ambitious, tying in no less than six viewpoints, a tangle of plot threads, magical and political implications, curses, and at least five different settings. For the most part, it worked amazingly well. Novik unfolded each perspective in its own time, giving you a chance to settle into the world and the cast of characters before throwing you into multiple heads. She also knew just where to end each chapter and switch focuses to really drive me, the reader, insane (in a good way). There’s something about Novik’s writing that feels so old-world-y fairy tale, like you picked up a dusty history book from centuries ago and got sucked into a fantastical world that used to exist. I also appreciated the dry, wry humor some of the characters exhibited when faced with a messed up world they weren’t supposed to have much say in. I highlighted quite a few passages for myself, as you may notice.

The ones we’re born with and the ones we make. Wanda starts off feeling much removed from everyone, including her brothers, but circumstances are what they are, and her little family’s growth was some of my favorite in the entire novel. Even the small moments of sisterhood between Miryem, Irina, and Wanda were like a match on a cold night.

Who doesn’t love a good political intrigue (uh, when it’s not in your own real life)? Mix in some truly creepy sounding demons and you’ve got some incredibly high stakes.

Spinning Silver seems to pull a bit from Rumpelstiltskin and tales like Hades and Persephone. It’s a mish mosh of the great parts of many fairy tales and seems to be angling to become a classic in its own right. Also, you know that part of the tale when the protagonist has to outsmart the antagonist and complete a task that seems impossible? This novel has some great moments of that.

Bonus Factor: A Land Of Ice And Snow

I could practically feel my fingers and toes freezing while reading this and I’m deep in the middle of summer in Florida, where just looking out a window makes me perspire. Novik’s descriptive sense of place, a human world that is slowly freezing to death (with all that entails), is altogether vivid and bleak:

A bitter cold was radiating out of the wood; if you knelt down and put out your bare hand, you could feel the chill creeping along the ground as though breathed out faintly by some distant giant, and the air had a thick strong smell of broken pine branches.

You’ll want to rage against the machine patriarchy that reduces a woman’s worth to her vagina and her father’s coffers:

“Gorek, she won’t look good for her wedding like this,” Kajus said, as if he was trying to make it all a joke. His voice was a little scared in my ringing ears.
“Who cares about her face!” my father said. “He’ll have the part of a woman that matters. […]”

Yuck. So much trauma could have been avoided if Wanda, Miryem, and Irina were simply granted the right to choose their own lives instead of having things forced upon them.

I think many of us ladies have felt this way in our lives:

I wanted to ease the moment past. The temptation was familiar: to go along, to make myself small enough to slip past a looming danger. For a moment I was back in the snow with [REDACTED] coming at me, his face contorted and his big fists clenched. I wanted to scramble away, to ask for mercy, fear running hot all along my spine. But it was all the same choice, every time. The choice between the one death and all the little ones.

Wanda’s dad is by far the woooorst (see above), with his drinking and abusiveness, but despite being a step above physical violence, Irina and Miryem’s fathers aren’t exactly prizes themselves. Irina’s isn’t above selling her off to the highest bidder, and Miryem’s dad is so passive at times he would let his family die than do the dirty work to provide for them. Yet even when they are doing despicable things, (most) of these men aren’t cartoonishly evil; Novik paints them in true human fashion—we all have our good and bad parts.

In the words of Taylor Swift, it was enchanting to meet you, Book. I didn’t want our time together to end, and I will look back on that magical night with fondness and the desire for more. 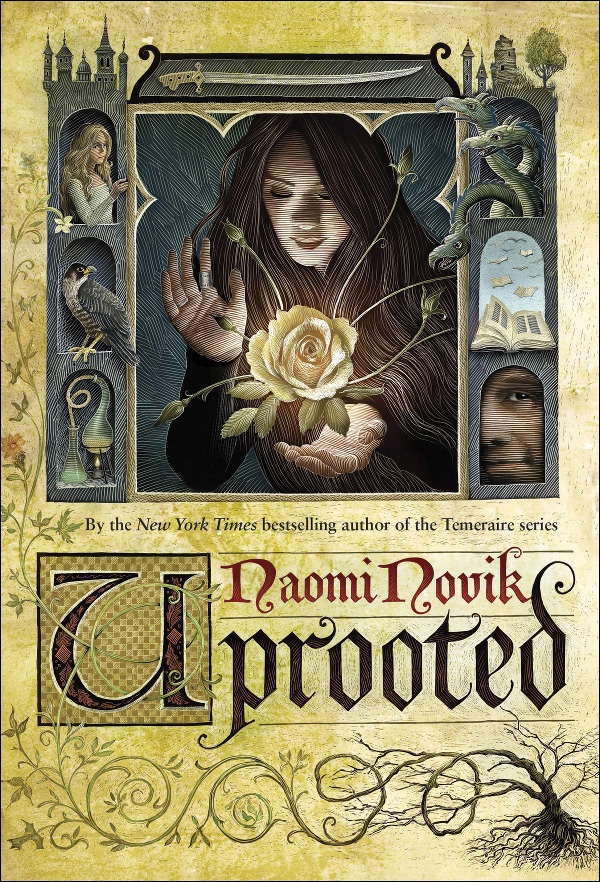 Obvs if you haven’t read Naomi Novik’s first book, Uprooted, then please go and DO IT.

For another Medieval Russian setting and lyrical fantasy, check out Katherine Arden’s trilogy that starts with The Bear and the Nightingale.

In Margaret Roberson’s An Enchantment of Ravens, you’ll find another girl whose extreme competence at her job gets her mixed up with a proud and mystical king.

FTC Full Disclosure: I purchased my own copy of this book. I received neither money nor peanut butter cups in exchange for this review. Spinning Silver is available now.