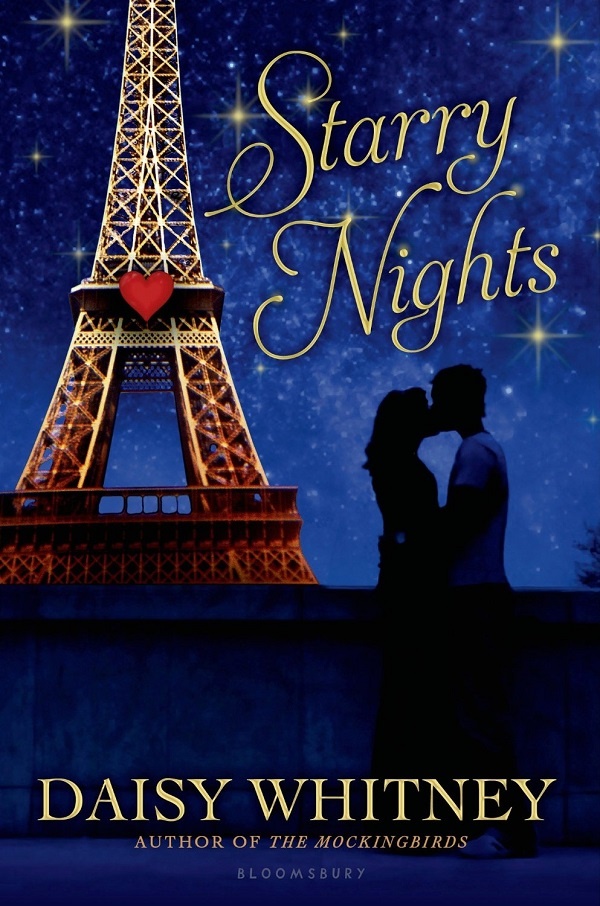 I don’t know if y’all have noticed — though when you read this book, everyone around you certainly will — but this is a kissing book and it takes place in Paris. Despite looking suuuuper chick lit-y (even though it’s not actually chick lit), I kind of love this cover, cheesy heart and all.

For seventeen-year-old Julien Garnier, the Musée d’Orsay is practically his second home: he leads tours there, and he has all-hours access. But Julien’s Ben Stillers, i.e. nights at the museum start getting a little strange when a peach falls out of a Cézanne. (OK, a lot strange.) And this phenomenon isn’t just limited to fruit, either: cats, ballerinas — and a beautiful girl named Clio.

But while some paintings are coming to life, others are, well, dying. They’re fading away, and it’s not the kind of damage that a restorer can fix. And it’s up to Julien and Clio to save the world’s greatest art.

Julien knows all the cool hangouts in Paris, so obvs I’d want to be his friend! He’s also fluent in English — and he does flawless accents, too — which would come in handy, since the only French I use on a regular basis anymore is macaron or poutine. Plus, Julien has great taste in friends, like the carefree Simon and the eccentric Bonheur.

However, Julien’s also pretty down on himself. He’s nursing a broken heart, he’s struggling at school, and he’s feeling like he sucks as an artist, too. Julien’s so tough on himself; he’s in serious need of hearing that he’s good enough, he’s smart enough, and doggone it — people like him!

Renoir’s much sought after (and fictious) The Girl in the Garden arrives at the Musée d’Orsay, and as does the girl in the garden herself, Clio. And y’all, it took me a while to warm up to this romance. I just couldn’t get over the whole ‘girl from a painting’ thing. Which is RIDONCK, since I have no trubs with vampires, ghosts or aliens. And yet people from paintings trip me up? Anyway.

Reservations aside, Julien and Clio are super cute together. They’re a bit too lovey-dovey for my liking, but they def. bring le swoon.

There were only two things I knew before I picked up this book: 1) Daisy Whitney, and 2) Paris (and kissing). But really, the first reason was the only one I needed. Starry Nights is a departure from Whitney’s previous books, in both genre and style. Plus, author genre-hopping is like one of my favourite book things EVER, and Whitney is just as skillful with modern fantasy as she is with realistic fiction. She breathes magic into every page — and I’m not just talking about the fantasy element.

Julien’s love of art deserves a bonus factor all on its own. I’m always envious of people with that kind of passion, because I’m not sure if I feel like that with anything. (Though if last night’s tweets are any indication, my passion may very well be the music of my youth.)

Two words: MUSEUM MAGIC. And a few more: A lot of the story takes place inside the Musée d’Orsay, and I always love behind-the-scenes glimpses that the general public isn’t privy to. I blame-thank Charlie and the Chocolate Factory.

Once again, Daisy Whitney proves that she’d be the ultimate travel buddy. I’ve never been to Paris; while I’d like to go some day, it’s actually pretty low on my wish list. But this book is great at convincing me that NEVER MIND, I WANT TO GO TO THERE.

And how much do I love that this is a book about a French protag set in France!? (Hint: A LOT.) I can learn about the Eiffel Tower and the Champs-Élysée from everyone and anyone, but it’s the local experience that I find to be the most appealing.

You know how some people are so good at conveying their love of something, that they make you love it too? THAT. I could listen to its stories long after the tour ends. This book doesn’t need magic to make the paintings come to life; it does that all on its own with its words.

FTC Full Disclosure: I received my free review copy from Bloomsbury. I received neither money nor froyo for writing this review (dammit!). Starry Nights will be available on September 3rd.