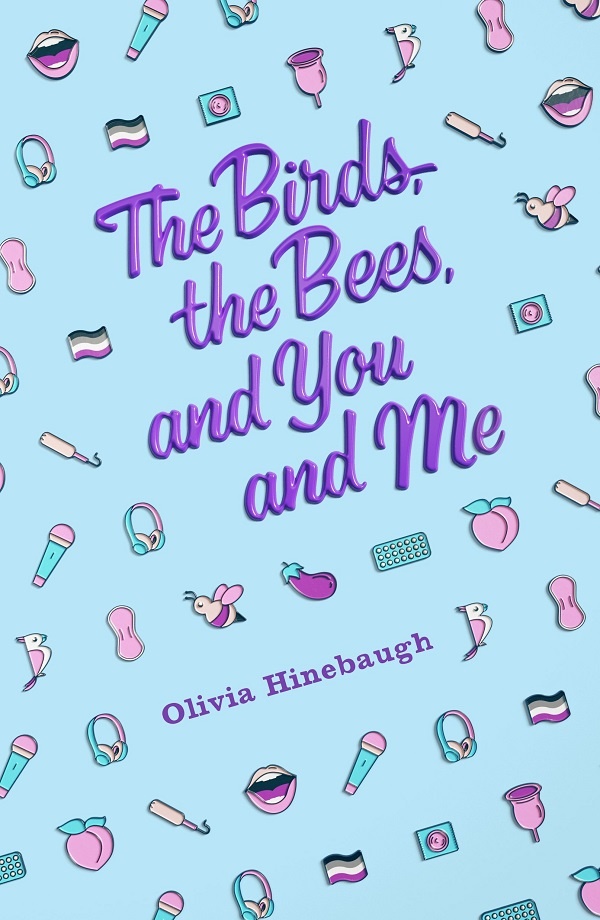 Title: The Birds, the Bees, and You and Me

Not only does this look like an adorable emoji release, but it’s all relevant to the book: the menstrual products, the contraceptives, the music equipment, the asexual pride flag, as well as the suggestive produce and critters. (Although technically, the Holy Grail—at least for me—a.k.a. the menstrual cup doesn’t get mentioned at all. And I almost wrote that there’s no butt stuff either, but then I remembered there actually was abundant appreciation for one character in tight pants.)

For someone who’s never even been kissed, Lacey’s practically a walking encyclopedia about sexual health. (It’s what happens when your super progressive feminist mom is a nurse who had you when she was a teenager.) Though she certainly wouldn’t have learned any of that through her school, since the sex ed program starts and ends with abstinence only. Frustrated at how the administration is dropping the ball, Lacey begins dispensing advice and contraceptives to her fellow students on the DL.

Rebelling against an antiquated and ineffective system to educate and protect her peers? Yeah, Lacey is a B-A-D-A-S-S. Except she doesn’t see herself like that, and it doesn’t help that her personal inexperience has done a number on her confidence. Lacey, I have literally been there. Even though you and I know full well that we don’t need boys to validate us, it’s also like, well, if I’m so amazing, then why doesn’t anybody like me?!? There’s so much more to you than being the object of someone’s affection. To use this BFF charm’s inspirational namesake as an example: Oprah isn’t awesome because of Stedman, she’s awesome because she’s Oprah! Maybe someone who’ll recognize that you’re the Oprah of being Lacey will come along, or maybe they won’t. Either way, that doesn’t change how considerate, compassionate, and just freaking cool you are!

When it became clear which direction the romance was headed—like, in an potentially-upending-lifelong-friendships path—I had concerns. Stories obviously need to have conflicts and obstacles, but I find situations like this SO STRESSFUL. (Plus, the love interest has a bit of Bianca Stratford syndrome, in that multiple people are into him. But at least it’s understandable why.) However, the novel navigates the ensuing messiness with nuance, care, and swoon, THANK GOODNESS.

Unsurprisingly, this has plenty of sex talk: none of it graphic, but all of it sex positive. The characters also aren’t afraid to have uncomfortable but necessary conversations—and not just about sex—with the kind of maturity that teenagers don’t get enough credit for having the capacity for.

Even though there isn’t a lot of diversity in the cast*, this book has a very inclusive perspective, especially with regards to sexuality and gender. There is, however, a slight misstep (and maybe just in the review copy!) in a reference to tampons as feminine protection, to which I give the benefit of the doubt because of a separate acknowledgement that not everyone who gives birth identifies as a woman. (Intersectionality is a continuous learning process!)

*Lacey’s bestie, Evita, is asexual, and a supporting character is bi, but racial diversity is a non-factor.

Lacey takes up the mantle of watching out for her classmates’ sexual health after their school fails to do so. She and the book are informative and nonjudgmental, which is exactly what sex education should strive to be.

Lacey’s mom has got it going on. And by ‘it’, I mean raising her kid to be as strong and determined as she is, and also as adept at quoting from Mean Girls. That’s just, like, the rules of feminism!

Lacey and her best friends, Evita and Theo, have long dreamed of attending music college in Boston together. They even have a band (viola, vocals, and cello, respectively), and Lacey and Theo are in the school quartet, too.

This might be one of, if not the only time obstetrics will be a bonus factor in an FYA book report. Lacey starts volunteering at her mom’s hospital as a doula, providing support to pregnant patients during labor. The whole childbirth thing really is incredible (and obvi much easier to read about than experience or witness).

I was cautiously optimistic when I first met this book, but I was able to breathe a sigh of relief after quickly realizing how smart and woke it is. That goodwill came in handy when it took me on a dicey romantic journey, but my trust was rewarded with a compelling story about sex, love, and friendship.

FTC Full Disclosure: I received my free review copy from Swoon Reads. This review was originally posted on Kirkus Reviews in exchange for monetary compensation, which did not affect or influence my opinions. The Birds, the Bees, and You and Me is available now.