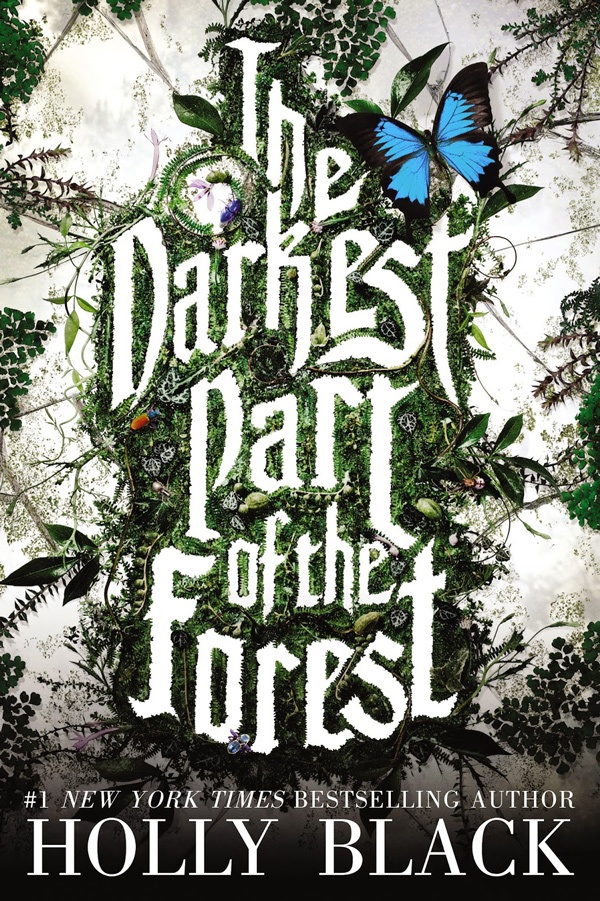 Title: The Darkest Part of the Forest

Cover Story: Not Too Shrubbery Shabby

As a person who still couldn’t quite believe that she was reading a fairy book, I was extremely relieved that this cover has no trace of wings or sharp cheekbones. I could do without the butterfly, but overall, I find the woodsy artwork to be tastefully refined and not embarrassing in the least. Like, there’s not even a tiny goblin lurking behind a leaf or a sprite peeking out from a flower. THANK GOD.

You know how, in Sunnydale, the townspeople were aware that vampires existed but kinda chose to pretend otherwise? Well, in Fairfold, everyone knows that faeries are real, and not only do they embrace that knowledge, they profit from it. Tourists come from all corners of the globe to buy “magical” souvenirs and gawk at the sleeping faerie in the glass coffin, a boy with pointy ears and horns. As natives of Fairfold, Hazel and her brother Ben grew up roaming around the forbidding forest while spinning stories about the boy and the future day when they would free him.

Now that they’re no longer kids, both siblings find adventure in the distraction of guys—Ben with serious relationships, Hazel with a whole lot of casual kissing. Their lives have lost the glint of magic and the thrill of danger… until the day that the boy in the coffin wakes up. And not even their wildest childhood dreams could have prepared them for the epic shitstorm ahead.

Initially, I thought Hazel was in the running for my Sassy Gay Friend charm, because girlfriend was not looking at her life, nor was she looking at her choices. I’m glad that she’s comfortable with her body, but seriously, there’s no need to kiss every single boy in the school, especially when you’re doing it to repress some pretty dark emotions. In the interest of not spoiling anything, let’s just say that Hazel’s memories aren’t the warm and fuzzy kind, and I understand why she would want to forget them. But fortunately for both of us, she begins to understand that she’s stronger than her past and bigger than her doubts. Hazel is a fighter in both the literal and figurative sense, and I admired her daring spirit and noble sense of justice, especially because I’m a huge pansy. So yeah, I could use a best friend who isn’t afraid to confront murderous monsters. Plus, you know Hazel could give some excellent kissing advice.

It’s better if you don’t know much about the romantic storyline before reading this book. But I can tell you that both Hazel and Ben get their fair share of action, and it’s brimming with lovely tingles and mega hot sparks.

Talky Talk: Straight Up With a Twist of Fae

In Holly Black’s skilled hands, even the most tired, bloated tropes can be made new again. She reinvigorated vampires in The Coldest Girl in Coldtown, and with this novel, she transforms faeries into something I actually wanted to read about. (More on that below.) While her imagination produces marvelously fresh concepts, it’s her economical style of writing that keeps those ideas engaging. Black ain’t no Tolkien, and she builds worlds without wasting words on endless descriptions and limerick shizz that no one cares about. There’s just enough fae culture to feel fantastical without threatening the authenticity of the dialogue and the bracing pace of the plot. Exciting and deliciously original, this novel is blast to read, and by read, I mean devour.

I’m a total Fred Savage when it comes to faerie books, so the fact that I’m listing these creatures as a bonus factor is a testament to Holly Black’s gift for storytelling. Much like Labyrinth and its nasty, biting faeries, this novel adds a twist on the typical lore, and the uneasy coexistence of humans and fae is fascinating:

Back then it was very rare for someone to die because of the Folk.

Tourists, the locals would say, a sneer in their voice. And they still did. Because everyone believed–everyone had to believe–tourists did stupid things that got them killed. And if someone from Fairfold very occasionally went missing, too, well, they must have been acting like a tourist. They should have known better. The people of Fairfold came to think of the Folk as inevitable, a natural hazard, like hailstorms or getting swept out to sea by a riptide.

It was a strange kind of double consciousness.

Given my general disdain for the Folk (I can’t even type that word without rolling my eyes), the greatest compliment I can give to this novel is that it doesn’t feel like a faerie book.

In order not to spoil things, I will only say that I mean this in the “fierce lady knight” way, not in the “hears the voice of God” way.

Ben is gay, and it’s awesome that Holly Black gives him a romance without being self-congratulatory or showy about it. Like any other teenager, he’s just looking for love.

Book, when we first met, I was a skeptic, but you quickly cast a spell on me with your captivating story and dashing heroine. Our journey together was enthralling, and while the magic may not last forever, consider me a believer in the power of faerie dust.*

*As long as it’s manufactured by Holly Black.

FTC Full Disclosure: I received my free review copy from Little, Brown Books for Young Readers. This review was originally posted on Kirkus Reviews in exchange for monetary compensation, which did not affect or influence my opinions.