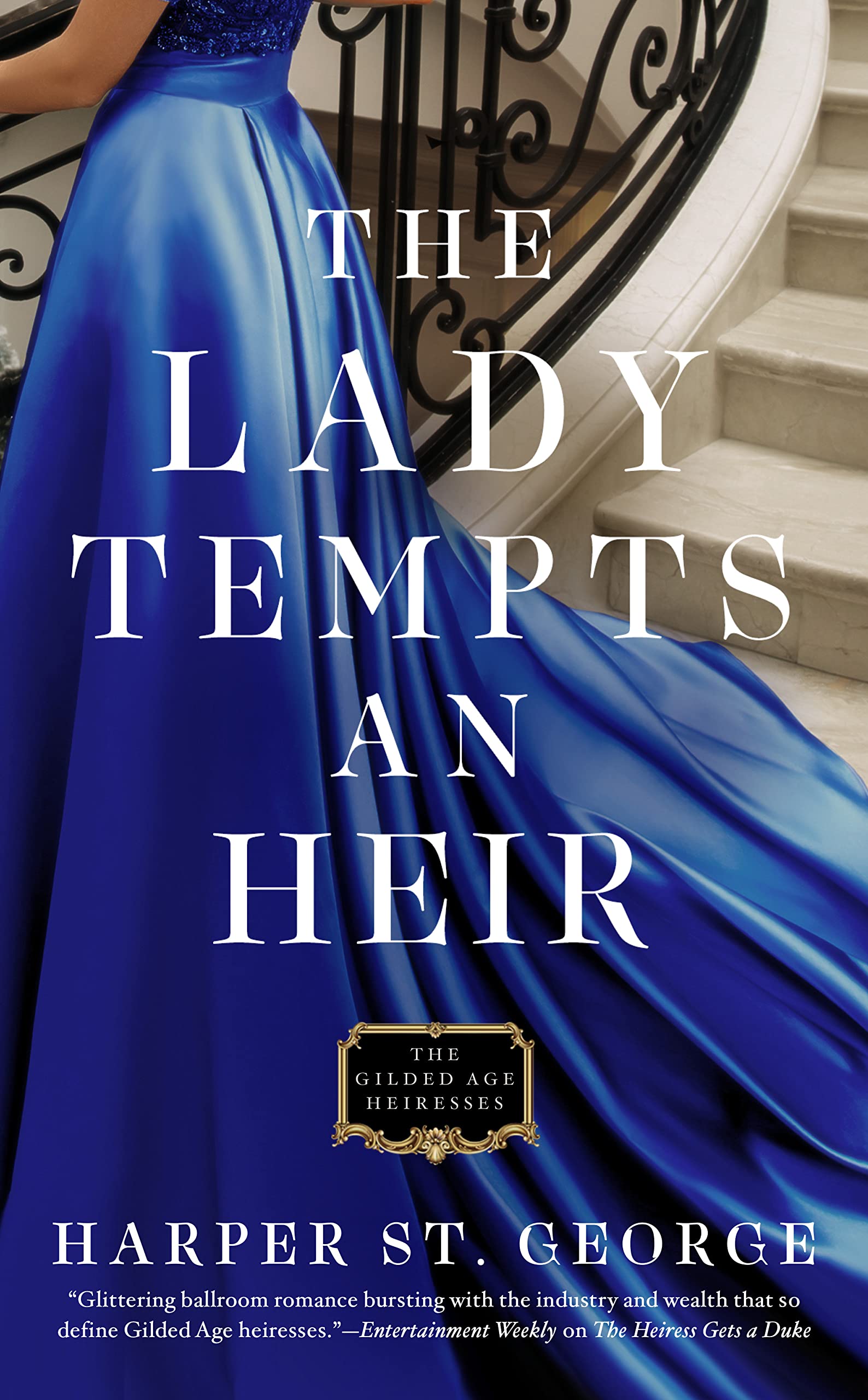 Title: The Lady Tempts an Heir (The Gilded Age Heiresses #3)

It’s probably the style Helena would wear but this is the least fun of the three fancy dress covers from this series. Where’s the pizazz!?

Lady Helena March hasn’t needed a man these last five years since her husband died, despite what her parents and society may think, and she doesn’t plan on losing the privilege of being her own woman unless the right man comes along. Someone who would support her on-going passion—a home for single women and their children—as much as she does. Except without a man, all of her donors have started to withdraw their funding, as it’s not seemly for a single woman to care about other single women.

Maxwell Crenshaw, heir to the Crenshaw Iron Works, has once again been required to return to London to assist his family, only this time it’s not a sister in trouble, but his father’s ailing health. Papa Crenshaw is still being a dick even from his sick bed, as he weasels Max into securing himself a fiancée by Christmas or he’ll take away a lucrative business deal his daughter, August, has been working on.

Lady Helena and Maxwell spent a few tension-filled days together roaming the English countryside in search of his sister, Violet, when she ran off with her now-husband (from book two). In the six months since, they’ve crossed each other’s minds, yet now that they have been reintroduced, they both refuse to give name to this thing passing between them—that is, until they realize that a fake courtship strung out over the next two months can be mutually beneficial for both sides, giving Helena the respectable man at her side in order to secure enough funding to buy a bigger home for her “fallen women”, and Matthew enough time to help August finish brokering her business deal so their father can no longer interfere.

The Lean: Just One Look

The romance in this book was probably the least exciting of the series, just because it was very insta-lovey for me. Both Maxwell and Helena felt stirrings in their nethers from their first meeting way back when, and though they spent the book having some real reasons why a marriage couldn’t work between them, their internal thoughts never strayed far from mutual adoration. It felt more run-of-the-mill than what I was hoping for.

He was hard and solid along her front but even more so where he pressed intimately between her thighs. She flexed her hips, grinding herself against him as he took her mouth, his need almost brutal in its intensity, but she didn’t care that her lips might be bruised tomorrow. Something about the idea made it more exciting, ratcheting up her arousal by another degree.

St. George’s writing still strays on the plainer side versus flowery, which I don’t mind:

She wasn’t supposed to be this deeply in the throes of arousal. Not here in her drawing room where she served tea once a week to her friends and where her own parents visited with her. But any flare of shame faded as he unhurriedly lowered his head to her breast.

We Need To Talk: Where’s The Spark?

This book felt more traditional and perfunctory than August and Evan’s story, like we needed to marry Maxwell off before we could move on to other side characters regardless of whether or not this was going to be an interesting relationship. I liked that Max was already fairly decent, but not without some notions that a man of that era would need some wizening up on, and thankfully Helena didn’t have to painstakingly point out all his shortcomings as he was able to work it out himself. As I reflect back on Helena now…she was a bit boring as a main character, and Max wasn’t much better. Maybe that’s why I came away feeling the way I do?

Was It Good For You? Whelmed

In the immortal words of Chastity, can you ever just be whelmed? Because I wasn’t wowed by this but nor did I completely dislike it. St. George’s pacing was still fine for me, and I breezed through this super quickly, but I don’t think I’ll harbor any lingering feelings for it any time soon.

FTC Full Disclosure: I received my free review copy from Berkley Books. I received neither money nor peanut butter cups in exchange for this review. The Lady Tempts an Heir is available now.