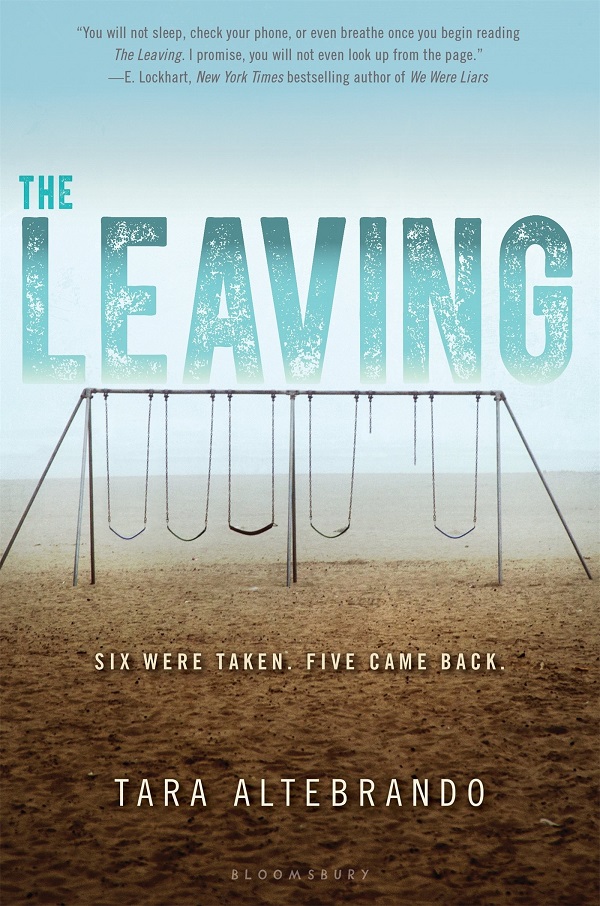 Cover Story: One of These Things Is Not Like the Others
BFF Charm: Destiny’s Child
Talky Talk: Puzzling
Bonus Factors: The Returned, Memories
Relationship Status: Coffee Date

Cover Story: One of These Things Is Not Like the Others

Improper playground maintenance doesn’t make for a particularly exciting cover, but this symbolic image is at least thematically eerie.

Eleven years ago, six kindergarteners vanished without a trace. And now, five of them are back, but with no recollection of those missing years or the still-missing sixth victim. As the five reacclimatize to lives they barely recognize, the truth behind their disappearance — known as the Leaving — begins to unfold.

I feel a little bad that I’m saying no, no, no, no, no, and it’s not at all yeah, yeah, yeah, yeah, yeah.* (It’s actually just the standard three nos, but how could anyone resist singing along?) As two victims of the Leaving that returned, Scarlett and Lucas understandably have a lot going on; the homes that they were taken from aren’t the ones that they come back to, with both homecomings taking unexpected turns. They have my sympathy and support as they heal from this trauma, but making new friends is probably the furthest thing from their minds right now.

Max still remains missing from the Leaving, and his younger sister, Avery, is relentless in trying to find him. To the point of turning on the rest of the victims, which is another NO, NO, NO, NO, NO. (I’m getting so much mileage from that song, y’all.) Avery’s frustration might be justified, but accusing victims of wrongdoing is lacking sensitivity at best and damaging at worst. Lashing out at everyone, I could forgive; she’s angry and hurting, after all. But I CANNOT EVEN with how bratty and entitled she can be. And I don’t use those words lightly, because I’m reeeeally hesitant to call out something that might be typical teenage behaviour as observed through grownup eyes. But when someone tosses ice cream out of a moving car because she no longer wanted to eat it and then throws money around instead of apologizing for her actions — I AM CALLING YOU A BRAT. (Also: WHAT A WASTE OF PRECIOUS ICE CREAM.) It’s not even an isolated display of privileged and inconsiderate behaviour, either. Nor would the blame be fairly placed on Avery being young, since plenty of teens manage to be not this terrible.

*Whoa, that chorus can be interpreted in… not a great way, right?

Lucas and Scarlett realize they share some sort of romantic history, beholden to a past that they don’t even remember — or necessarily want to repeat. Meanwhile, Avery’s relationship with her boyfriend is disintegrating, further worsened by her growing attraction to Lucas. But the condensed timeline in which this all happens has me channeling Sassy Gay Friend: you met him Sunday; it’s barely Thursday morning (it’s actually even sooner than that). Not to mention the emotional whiplash of this development from their contentious, not even fun enemistry first encounter. KINDLY SLOW YOUR ROLL.

The story cycles through the POVs of the three leads, with Tara Altebrando playing around with text placement for the Leaving pair: sentences in Scarlett’s sections forming into shapes, and snippets of Lucas’ fractured memory appearing in dark boxes.** Pieces of the truth gradually fall into place, generating intrigue that the reveal doesn’t wholly live up to.

And this isn’t exactly a trigger warning, but this book kind of has unforeseeable unfortunate timing: it makes references to a fictional school shooting in Florida. While the similarities to recent events are faint, the tragedy at Pulse nightclub was still incredibly fresh when I read this last month.

**Neat effects, even if they didn’t always work well with my ereader settings. But that just could have been an e-galley issue, too.

Without memories and experiences as the intrinsic building blocks of identity, the teens of The Leaving are getting a fresh start to the EXTREME. Altebrando poses the curious quandary of how to forge a future without the past.

Given its promising profile, I’ve been looking forward to meeting this book for quite some time. Even though it gave me some serious food for thought, our personalities — esp. that of one of its characters — didn’t mesh well, and I caught myself watching the clock on a few occasions. We might be going our separate ways, but at least we’re leaving (har) to find better matches for ourselves.

FTC Full Disclosure: I received my free review copy from Bloomsbury. I received neither money nor froyo for writing this review (dammit!). The Leaving is available now.