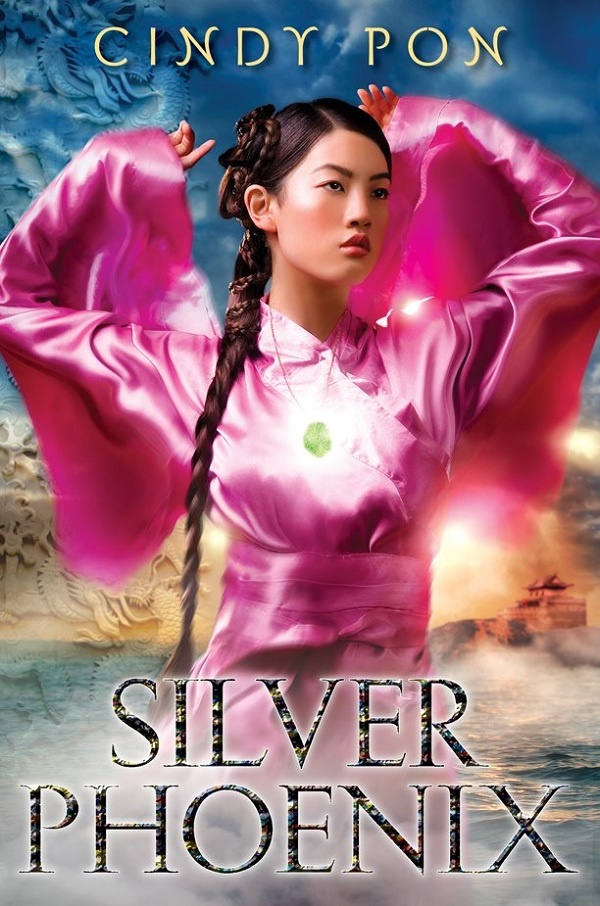 So, these covers are pretty notorious on the book blog interwebz. Let me explain. The cover on the left is the original. It’s a bit cheesy, but still pretty and definitely let’s you known you’ll be reading a some type of Chinese-set fantasy. The cover on the right is the reissue. The beautiful Chinese girl is gone, replaced by a shadowed, half-faced, “ambiguously” raced (though, let’s be honest, she is white) girl. You can no longer tell that it’s an Asian themed story or even a fantasy and it now looks nearly identical all those faerie/paranormal romances flooding the market these days. To summarize, it’s hideous and I hate it. Uhhh.

Before her father left, Ai Ling’s biggest problem was the embarrassment of being unable to secure a marriage match. But once her father fails to return from the palace as promised, Ai Ling and her mother’s financial problems worsen, culminating in a slimy local business man trying to collect on a debt they’re positive their father never made. His proposed solution? That Ai Ling become one of his wives. Rather than marry him, Ai Ling runs away to search of her father. Now Ai Ling’s world is full of monsters and demons she’s only read about in books, her developing powers that she’s just learning to control, and the handsome Chen Yong, whose past and future may be more entwined with hers than she knows.

Ai Ling is definitely deserving of a charm. She’s brave and smart and doesn’t get bogged down by the rules that her society places on women. She’s willing to go search for her father, even though she’s never been on her own before and traveling is dangerous for a woman alone. When she begins to develop her unusual powers, she doesn’t shy away or try to ignore them. She tries to use them when situations become dire, even if she’s not entirely sure how to. And when the goddess tells her about her destiny, she accepts it gracefully instead of whining or complaining about something she has no control over. While she didn’t have very many friends at home, she becomes fast friends with Chen Yong and his brother Li Rong and proves that she can make friends, as long as they’re cool enough to deserve her.

I REALLY wanted something to go down between Ai Ling and Chen Yong!! He’s handsome and brave and kind and clearly has a thing for Ai Ling. She likes him too and there is definitely flirting and awkward looks and sexual tension. But neither of them is brave enough to speak up and do something about it! Booooooo! I know this probably (read: definitely) has something to do with drawing their relationship out for the sequel but I want instant gratification! I have to say though, when these two crazy kids finally do make it together, there are going to be some major fireworks.

Ai Ling makes a good narrator, straight forward but with descriptions that really hit the mark. For example, in a scene in which she is meeting a possible future husband:

She fought to quell her trembling as Liao Kang stepped forward and extended his hand. He was a bamboo of a boy, the barely green type, with large almond eyes in a pale face. Would this boy see her hair unbound on their wedding night? Her mind flitted to The Book of Making. Heat suffused Ai Ling’s cheeks. She took his hand, feeling the damp of her own palm, and allowed him to lead her into the restaurant.

This book combines a mix of Chinese culture, history, food, folklore and mythology all wrapped up in a fantasy book burrito.

DO NOT READ THIS BOOK WHILE HUNGRY. I REPEAT, DO NOT. Seriously, this is one of the most food filled books I’ve read. It’s like torture! Just description after description of food, constantly. And even the food I would hate (like pork anything) sounds delicious when reading about it here. This book should come with a coupon for take-out. Yumtown.

I’m feeling pretty good about the date this book and I went on. Good enough that I’d like to attempt date number two with the sequel and learn a bit more. Occasionally, I felt this book held back a bit. (For example, I wanted more resolution in the love story, the mythology felt a bit all over the place at times and certain plot devices – monster attacks, monster is defeated, rinse, repeat – were overused.) But it was a first date and I have a feeling that some of these issues won’t be around when we meet up for a second time. And I enjoyed myself enough to invest a bit more time in this story.

FTC Full Disclosure: I received neither money nor cocktails for writing this review (dammit!). Silver Phoenix is available now.