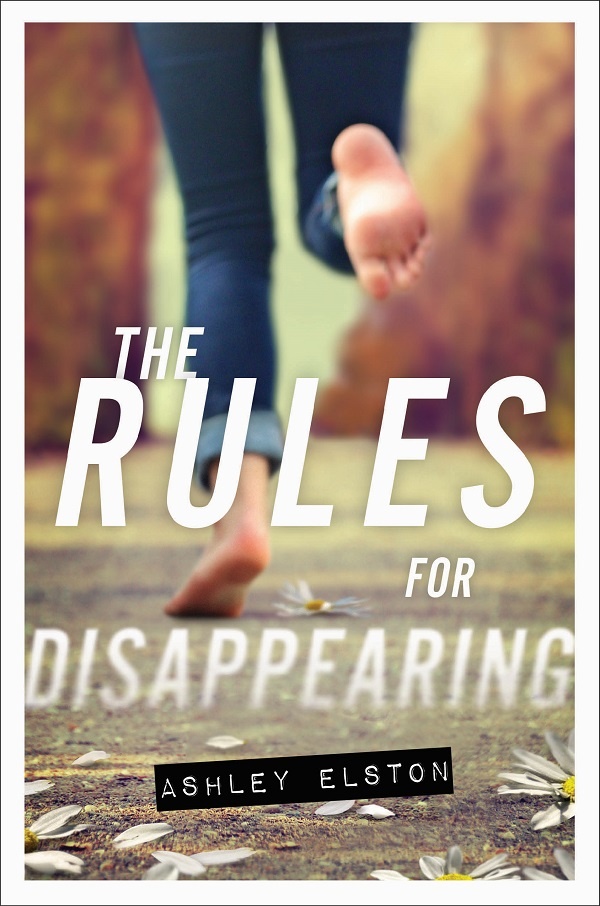 Published: 2013
Series: The Rules for Disappearing

It’s not overtly YA, but this cover is SUPER literal: a girl running away — i.e. disappearing — with a trail of daisies in her wake. Daisies do show up in the story, but there’s no actual running running away. And esp. not barefoot on pavement. (Which? OUCH.)

But upon closer inspection, that’s not even proper running or walking form; what she’s doing is more like hopscotch. (And yes, I know this because I tried to recreate that pose.)

Meet high school senior Meg Jones. She and her family have just moved to Natchitoches, LA. Only her name’s not really Meg Jones, and this is the sixth time she’s moved in the past year. You see, her family’s in Witness Protection (although no one’s bothering to tell her why).

But Meg’s tired of losing everything over and over, and she wants to stay in this current placement for good. Though that might not be up to her, as the her family’s mysterious — and dangerous — past unravels and catches up with them…

I was willing to give Meg some slack, ’cause girlfriend has it rough: her life is constantly being uprooted; her dad’s distant and paranoid; her mom’s never even sober enough to leave the house; and her younger sister Mary is a shell of her formerly vibrant self. And teenagers don’t always have the best judgment, as my personal history of high school crushes can attest. BUT. The poor choices I made only compromised, like, my grades, not the safety of my family.*

*So really, only my safety was in danger. Insert stereotypical Asian Tiger Mom quip.

I feel for Meg; I really do. She’s had to grow up in a hurry and take on more responsibility than any kid her age should have to. She gives herself a set of rules to follow in order to avoid making — and subsequently having to break — emotional attachments.

I was actually on the fence about this book, but was sold by the promise of “Ethan Landry, an adorable Louisiana farm boy who’s too smart for his own good”. So OF COURSE I hated this relationship.

Ethan is intrigued by Meg from the start. Despite Meg forcing herself to decline his advances, Ethan doesn’t give up that easily. Now, some of us here at FYA are v. v. vocal on the debate of endearing persistence or borderline harassment. Granted, Meg is interested in Ethan, but no never means not no. (Er. You know what I mean.) Learn to take a hint, bro.

So when Meg finally caves to her (ugh) undeniable attraction to him, Ethan picks up on what she isn’t giving up. (The truth, I mean, not her lady treasure. Although she doesn’t give that up either, and it never comes up. The topic of sex, I mean! OK, closing the parenthesis of innuendo now.) Ethan is likewise determined to learn Meg’s secret. But he’s also a big ol’ hypocrite, because he refuses to talk about his feud with his former BFF and Meg never calls him out on it. Oh! And he takes it upon himself to be an intrusive snoop and look into her past. Honesty may be important in a relationship, but so is respect. Ethan, Meg barely knows you, and she’s going to divulge all her secrets — and esp. those secrets — why? Hey, she just met you. And that’d be craaaaazy.

Luckily for Ethan, Meg doesn’t share my qualms about respect. In fact, UGH she pretty worships the ground on which he walks, and the sentiment is reciprocated. Boundary issues aside, Ethan is actually not a horrible person. There’s a fair bit of clothed action, so technically, this book has some groundwork for swoonage. But any shred of goodwill Ethan garners is completely squandered due to his insufferable behaviour. That lack of emotional connection made it impossible for me to swoon in otherwise swoonworthy situations .

Halfway into this book, I realized a most curious thing: I didn’t like the heroine, I certainly didn’t like the love interest, and yet I couldn’t stop reading. And it wasn’t like a hate-reading thing; Ashley Elston’s writing was compelling enough to negate my, ahem, difficulties with characterization. I even considered checking out again in the future. (This is her first novel.)

BUT THEN. Somewhere in the middle of the book, when questions were finally being answered and action was ramping up, I actually became less interested. I prefer how Elston set up the mystery to how she unraveled it. It also didn’t help that my liking of this book was inversely proportional with the amount of Ethan in it, and he gets increasingly featured in the story as it progresses.

Speaking of mystery, I’m no Veronica Mars — hell, I’m not even a Vinnie Van Lowe — but there was something that I guessed correctly INSTANTLY. Though there was one part that I didn’t count on: SEQUEL BAITING. I feel the same way about sequels as I do concert encores: they should be earned, not assumed. Just write one standalone book! I’m more understanding when it’s a world-building book and the author wants to keep revisiting that world. But in this case, it’s some contrived, deus ex machina conspiracy bullshizz.

In Meg’s original life, she was actually a popular Mean Girl. Since entering Witness Protection, she’s had to comply with the program’s rules of blending in and being inconspicuous. And I was really interested in exploring the complexity of Meg having to constantly become someone else, at a time when her own identity hasn’t even been fully formed yet.

But no. That gets pushed to the backburner when the plot picks up. Sigh.

At one point, eleven-year-old Mary tells Meg about someone saying ‘the F word’. But then in her own inner dialogue, Meg calls it ‘the F word’ too. And it’s not like she doesn’t swear; there are ‘shits’, ‘bitches’, and ‘assholes’ aplenty! (And, thankfully, not literally.)

It’s just really jarring to have this weird, arbitrary distinction that ‘shit’ is OK, but ‘fuck’ is not. I mean, shows on networks like AMC and F/X have to abide by a similar standard, and for the most part, it’s not really obvious* — so there are def. ways around it. It’s just one of those small things that distract me and then I can’t un-notice it.

*But then you’d get a show like Nip/Tuck with a lot of fucking but wasn’t allowed to say ‘fucking’, and it’s just fucked up.

This book and I weren’t super serious or anything, and I never saw a future for us. Still, I kept dating it, growing increasingly resentful until the relationship came to an end on its own. But this book left with this ambiguous goodbye. Does it want to get back together? Or does it just want to leave me wanting more?* Whatever the case, I’d rather it just disappear from my life altogether.

*There is, indeed, a sequel in the works. WHY!?

FTC Full Disclosure: I received my free review copy from Disney Book Group. I received neither money nor froyo for this review (dammit!). The Rules for Disappearing is available now.