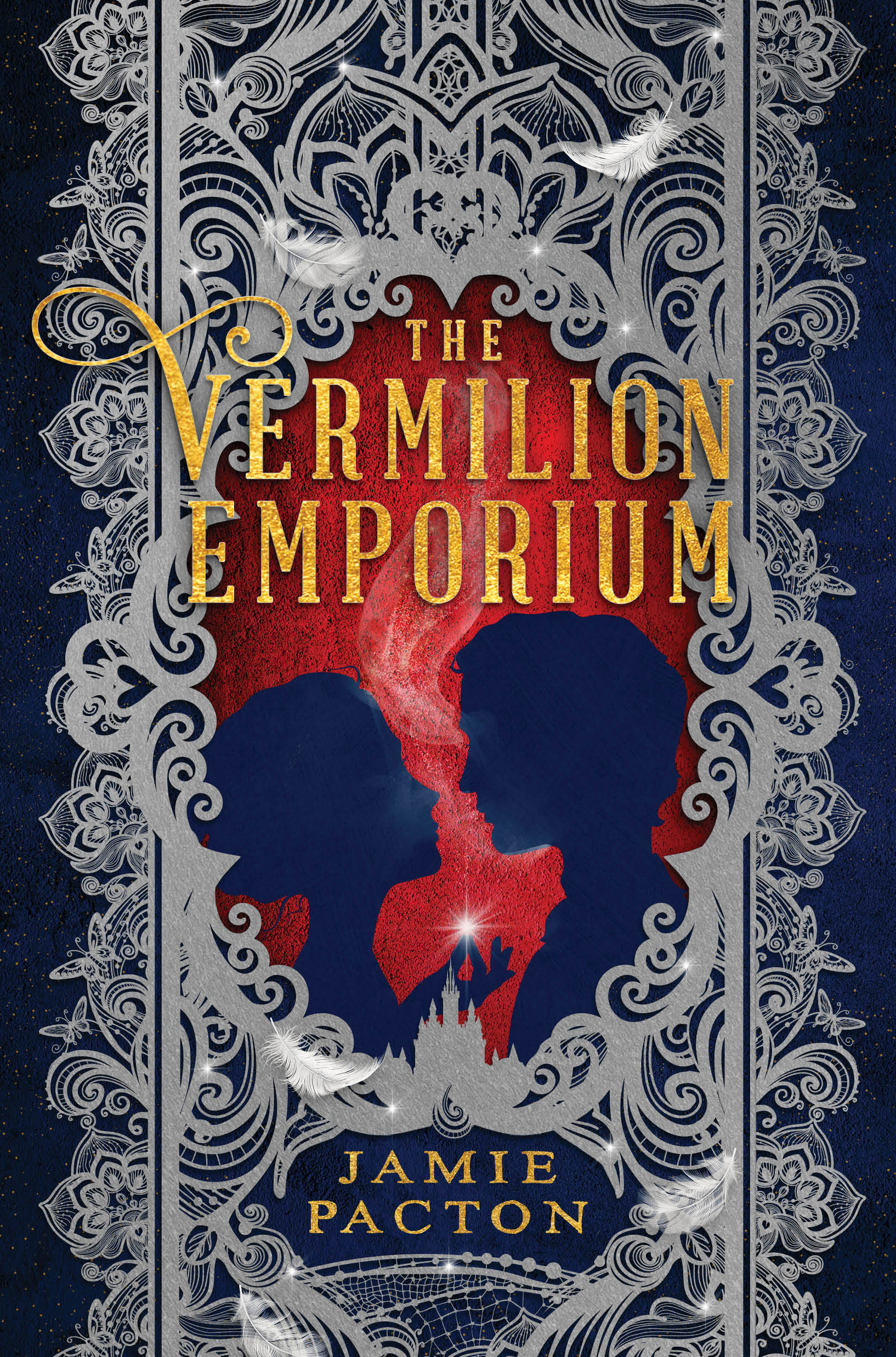 Did y’all ever get a silhouette from Disneyland when you were little? That is what this cover reminds me of. Especially with the castle at the bottom of the filigree frame.

Quinta and Twain know they’re cut out for more than their lives currently provide; Twain, living in a shack, makes a dangerous living by climbing cliffs to gather highly sought-after feathers while Quinta is an assistant to a photographer who specializes in faux sorcery images. They don’t know each other, but when Twain discovers a strand of starlight, a rare—and valuable—magical good, they begin an adventure the likes of which neither could have ever imagined, starting at a mysterious shop called The Vermilion Emporium.

Twain’s a sweet, loyal boy with a heart of gold and brains to match. He’s got some baggage—he says his mother told him that they named him Twain because he came “twain” his parents, which, awful—and he is grieving the loss of his younger brother, which he feels is his fault. But he’s a genuinely good dude, and would make for an excellent BFF. Especially when it’s revealed who he is near the end of the book and what comes with that. (I’m a sucker for friends with magical benefits, what can I say?)

Quinta’s a fascinating young woman with an interesting history and a promising future. She wasn’t all that nice, however, when we first met, and her assurance that she leaves people before she can catch feelings (she’s a one-night stand kind of gal) has me hesitating to want to attempt a relationship with her, even if ours would be purely platonic. By the end of the book, she shows a good amount of growth, and it’s clear that her “love ’em then leave ’em” mentality was more about protecting herself and her heart than actually not wanting to care. Would it be worth my time and mental effort to attempt to be her friend from the start, though? I’m not so sure.

Twain and Quinta hit it off from their first meeting, but their relationship is hindered by Quinta’s reluctance to let people in and Twain’s goal of leaving their city as soon as he can get the funds. The more time they spend together, however, the more they begin to rethink their positions. That said, their feelings really never felt all that real to me, as much as they tried to assure me that they were. It’s instalove with a side of “oh no, we mustn’t” dramatics that had me rolling my eyes.

The Vermilion Emporium is an entertaining book that needs some more time in the oven. The copy I read is an ARC, so I’m not sure if the final version will be more cohesive, but the plot I read was a bit disjointed—the first two-thirds felt very different than the last third, and then the ending was rushed—and both the worldbuilding and characters could use some work. The book felt very “tell, don’t show,” which is a hard thing to review on because it can be pretty subjective but makes for a clunky read.

*I’m not talking about American football here, obvs, but if your mind went there—I hope your team’s doing well!

The idea of The Vermilion Emporium itself is a wonderful element of the book. The shop is a TARDIS—larger on the inside—with an infinite number of strange and unusual rooms. The rooms also frequently house the exact thing you need, even if you didn’t realize you were needing anything. There’s a sentience to the store that is a little unnerving, but it seems to be harmless … for the most part?

In her author’s note, Pacton says that she was inspired in part to write this story because of learning about the Radium Girls. Their story is definitely worth telling, and even in this fantasy-ized manner, it gets the point across that there are some jobs that just aren’t worth doing. I won’t go into detail on how or what is similar in the book to the painting of watch dials with radioactive paint, but it might be even more gruesome than reality.

You have a lot of promise, Book, and a great story to tell. You could perhaps benefit from a bit of editing to truly make your story shine (pun intended), but only a bit! You’re nearly there. The Life and (Medieval) Times of Kit Sweetly

Pacton’s contemporary novel isn’t a fantasy, but it does involve lady knights!

Megan E. Bryant’s novel is another take on the Radium Girls story. FTC Full Disclosure: I received a copy of this book from Peachtree Books, but got neither a private dance party with Tom Hiddleston nor money in exchange for this review. The Vermilion Emporium will be available Nov. 22.