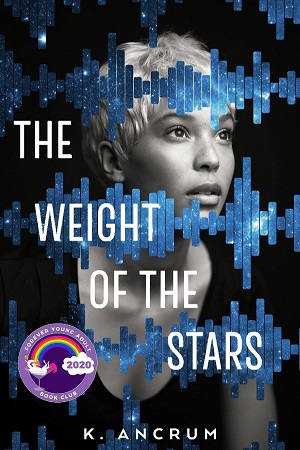 Title: The Weight of the Stars

Trigger Warning: There’s a scene of attempted sexual assault and mentions of the deaths of family members and stints in rehab in The Weight of Stars that might be triggering for some readers.

There’s a lot to look at at this cover, but my eye went immediately to the very pretty girl on the cover, mostly because she looks a lot like Antonia Thomas (who played Alisha on Misfits). Aside from that, the cover is a great amalgamation of the main elements of the book, from the look on her face to the spacey sound wave pattern.

Added bonus: the sound wave pattern is printed onto the edge of the book’s pages, too. Gotta love that sort of attention to design.

Ryann Bird is an outsider with a secret: She truly cares about people, particularly those who are outsiders like herself. When her history teacher gives her an “assignment” to befriend the new girl, Alexandria, Ryann thinks it’ll be easy. But then Alexandria has an accident—one that might be partly Ryann’s fault—and Ryann’s forced to rethink her whole plan, and help while Alexandria’s out of commission. Including sitting on Alexandria’s roof and listening for transmissions from a one-way deep space mission Alexandria’s mother went on right after Alexandria was born.

I really liked Ryann, even when she’s being kind of an asshole to Alexandria. She’s a seriously tough cookie, and there’s a good (enough) reason for her bristly exterior. But she’s so caring, and takes a lot of the kids who might otherwise be alone throughout high school under her wing. She’s a mama bird, and she’s put her own life on the line for her family, both blood and found. As much as I’d love to be her friend, however, I just don’t think I’m damaged enough to be of interest to her. Nor do I want to get on her bad side; girl is quick to jump to fisticuffs.

Ryann and Alexandria have a hardcore amount of enemistry from their first meeting. It takes a while for either of them to warm up to the other, but the slow-burn swoon is lovely, sweet, and pretty realistic for two young women who both carry a lot of baggage.

The Weight of the Stars’ chapters are short, and often choppy, and headed by designations of various time periods that are all over the place. (I think they have something to do with the passage of time, but I’m still not 100% on that.) The characters are flawed, and can be a little too much at times. And it took a long while for the actual truth of the story to be revealed. But the way the book is both too real and near-future science fiction is a delightful and unique mix, and the way Ancrum mixes heartbreak and happiness is stunningly impressive. Her writing is poetic, and the short chapters help to drive both the quieter moments and the intense ones. The book absolutely snuck up on me, and by the end all my earlier complaints were long forgotten.

The Weight of the Stars is the kind of book that, after finishing the final page, you have to sit and think about for a while. I know I’ll be doing so for a long time to come.

One thing Ryann and Alexandria share, even at the very beginning of the book, is a fascination with space. I loved being able to connect so strongly with this aspect of both of their characters, as I, too, have a deep fascination with—and love of—space.

Although Ryann’s brother James is a secondary character, the rest of the people in Ryann’s family aren’t related to her by blood. Basically, she’s “collected” them, and for some reason, they just work.

Ryann and Alexandria aren’t the only people who fit in the LGBTQ+ category, but none of the relationships or the talk about non-straight feelings/relationships feel unnatural or Issue-y. More and more, sexual identity in YA is just a piece of the puzzle rather than being the Main Point, and it’s so great to see.

There’s a lot of space between us, Book, but that doesn’t mean that what we have isn’t worth the wait or the effort. You made me feel both lonely and happy, and it’s been a while since a book’s had that kind of effect on me. I honestly didn’t realize that I was in love until our time together was at an end, but I wouldn’t trade it away. When our time comes again, I’ll be here, waiting.

FTC Full Disclosure: I received a copy of this book from Imprint, but got neither a private dance party with Tom Hiddleston nor money in exchange for this review. The Weight of the Stars is available now.