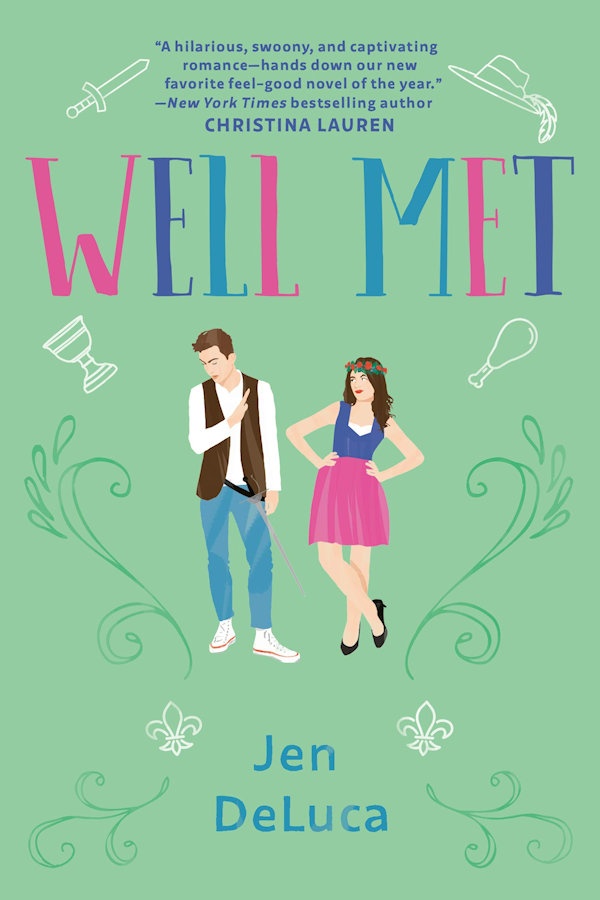 First Impressions: Lazy Effort
What’s Your Type? Enemies to lovers, forced interactions while doing silly things, small towns
The Lean: Whip Lash
We Need to Talk: Not Enough
Was It Good For You? Shrug

The cheery green color and the cartoon people are adorable. But I am completely unimpressed that Simon is on the cover with a lame vest instead of his sexy PIRATE COSTUME. Emily’s ren faire look is totally not period appropriate.

Meet Emily, a mid-twenties, college-drop-out bartender who was dumped by her recently partnered lawyer boyfriend who she gave up too much to support. Her older sister and niece were involved in a bad car accident, so she drops everything (to be fair(e), she didn’t have a lot going on) to go help out in her sister’s tiny town of Willow Creek. She’s feeling a bit fragile—adrift if you will—and is overly generous with her time to the detriment of her own wishes.

And then there’s Simon, born and raised in Willow Creek and living in the home his parents gifted to him. During the school year he’s an English teacher for the local high school, but over the summers he runs the town’s popular renaissance faire, which raises money for local charity. He’s stern, uptight, and may have a permanent stick up his butt.

Funnily enough, no one mentioned to Emily that she’d be forced to play a tavern wench when she went to drop off her niece, Caitlin, for the ren faire sign-ups. Simon is none too amused by Emily’s laissez-faire attitude (see what I did there?) about his precious event, but, well, they’re down to only two wenches this year, and Caitlin needs a chaperone. Emily steers clear of Simon until the faire begins, but then she gets a load of his charismatic alter-ego: a pirate captain in leather pants and plenty of visible chest. What’s weird is Simon’s alter ego really, really likes flirting with Emily’s alter ego tavern wench. And what’s weirder? Emily kinda likes it.

I’ve determined that writing the enemies-to-lovers trope is really hard. Kudos to those who do it amazingly well, because for every fantastically sexual-tension-charged book we get, there are many others who can’t quite stick the landing. Simon and Emily before the faire are pretty vanilla, and then once they’re all dressed up, everything moves a bit too fast for me to really bask in the exquisite torture this trope demands. Emily had a great moment where she took advice from a fortune cookie and simply asked for what she wanted. Loved it!

Buuuut then the writing took a sharp U-turn as Emily had to perform some impressive mental gymnastics to make some clunky misunderstandings fit the plot. I was left feeling lukewarm about Emily and Simon and much more interested in everything else to do with Willow Creek.

This was faire-ly tame (can’t stop, won’t stop) as far as dirty moments go, but there was some pirate-y themed make out talk. You know the kind.

Simon kissed like a pirate. His lips were soft yet demanding, but his tongue…plundered. There was no other word for it.

I can think of several hundred others.

We Need To Talk: Not Enough

This book had me at “renaissance faire,” because I have known one or two in my day. Sadly, I’ve haven’t worked a faire before, but never say never! I enjoyed the look behind the scenes at all the prep work that went into putting on things like a human chess match and figuring out the period authentic clothing. That may be the extreme organizer/event planner in me.

But ultimately, I was left wanting more of the faire when it was happening, as we readers were as stuck in the tavern tent as Emily was, unable to go experience things like pub sing. I also wanted more of Willow Creek as Emily found herself falling in love with its small-town charm. There seemed to be so much to mine between Emily and April, especially as they were just learning to be sisters now that they were adults (April is like 12 years older).

In short, the romance part was fine, but what made the book halfway decent was all the stuff surrounding the couple—so that’s like, +1 for atmosphere but -1 since this is a romance book.

Was It Good For You? Shrug

Like a casual but uninspiring summer fling with the resident ren faire hot dude in the kilt and faux Scottish accent (AKA Mitch the gym teacher), I don’t think I’ll be thinking back much on this book after the first leaves of autumn start to fall and PSL rears its delicious head.

FTC Full Disclosure: I received my free review copy from Berkley. I received neither money nor peanut butter cups in exchange for this review. Well Met is available now.