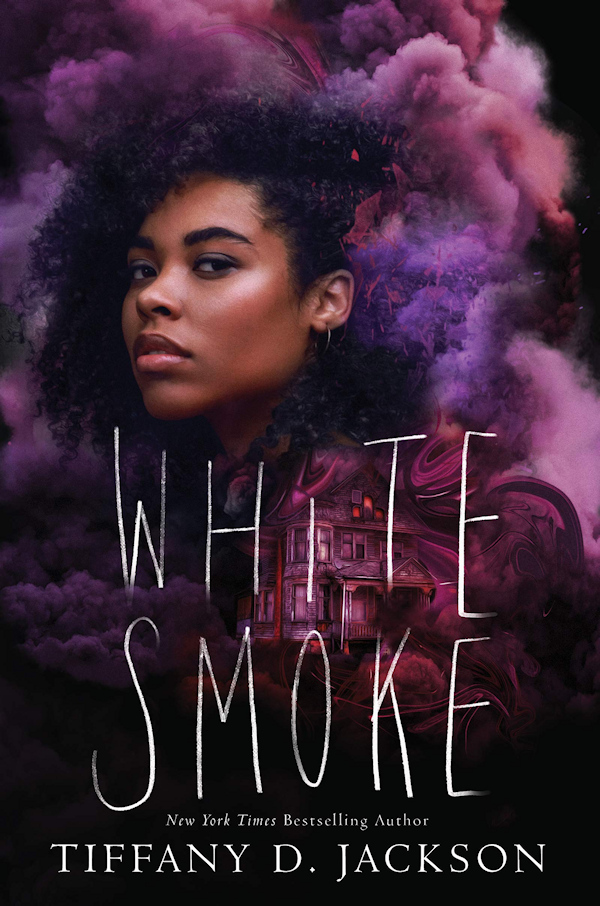 Content Warnings: If you have a phobia of bedbugs you may want to avoid this. Like, seriously. Book contains discussions of addition, drugs and overdose, mental illness, racism, and murder.

This cover is so pretty and yet vaguely creepy. I love the look on the girl’s face as she stares at the reader and the colorful smoke swirling around her hair. No notes!

Marigold’s current, psychologist-approved motto is that “change is good, change is needed, change is necessary.” She’s put her family (mom and new step-dad, plus her BFF little bro and her manipulative B of a step-sister) through a lot of the last year, so she goes along with a move from the California coast to the Mid-West where her mom has won a cushy job that also gives them use of a home rent-free.

Cedarville is in the midst of a makeover after economic downturns and drugs have ravaged the town’s population. In addition, there’s been multiple fires (possibly caused by riots, but let’s not discuss that) that destroyed most of the street Mari’s family now lives on. Their house is newly renovated, but there’s some strange things afoot: The construction crew has alarms to drop everything and leave at 5pm on the dot. The foreman tells everyone they are not allowed in the basement. And everywhere she goes, Mari feels like she’s being watched or finds objects sitting out where they shouldn’t be.

But ghosts aren’t real, right? And there’s certainly nothing wrong with this supposedly idyllic little town…right?

Oooh boy. There is a lot to unpack about Mari. Mari has had a ROUGH year: a bedbug infestation, psychosis, addiction and its aftermath, and a shitty boyfriend who betrays her. Not to mention that as we went further into her story and watched how her family reacted to her issues, I felt like she was not getting the proper amount of mental health counseling she needed. So I have a lot of sympathy for her, and I know she isn’t at her best. But that doesn’t mean I’m willing to just hand over a BFF charm either, and a lot of that has to do with how she treats others and her obsession with pot (more on that below). I understand with Mari’s extreme anxiety why she wants to smoke constantly, but having to be in her head while she makes dumb decisions surrounding her all-consuming acquisition of pot…it’s not for me.

There are way more girls than guys at Mari’s school. Of course, being new and acting uninterested means she catches the eye of Yusef, the most popular single dude around. Mari is standoffish, but they slowly bond over a love of gardening and Yusef’s adorable personality. However, Yusef—for reasons that are revealed—really dislikes drug use, and Mari’s rekindled passion for gardening is because she wants to grow her own pot plants, so…it’s hard to swoon when you know there’s probably a blow-up coming. Also, with everything else going on, there isn’t time for this to be a big kissing book.

So right off, the spooky vibe was on point. Bad smells coming from the vents, unexplained movement around the house, the ever-present feeling that someone is watching you when you’re alone. Jackson set us up for an excellently creepy mystery. But, unfortunately, it just didn’t quite come together in a satisfying way.

There were SO many threads to weave together—discussions of mental health, the hauntings at the house, the mystery of the town’s history and too-good-to-be-true future (which in itself contained multiple topics like gentrification, racism, and corporate corruption), Mari’s step-sister Piper’s escalating actions and their family dynamic—and there wasn’t enough to pull them all into a cohesive tapestry.

The ending was (kind of) unexpected and intense, but it literally also ended at the WEIRDEST moment—way too abrupt with zero wrap-up. We needed an epilogue to pull everything together into one perspective and perhaps get a little comfort after such a heavy story.

It’s not like Mari’s new family dynamic is anything to emulate, but there’s a lot of interesting friction between how Mari’s Black mom has raised Mari and Sam and how her White step-father dotes on his ten-year-old daughter, and if they can become a cohesive unit. Like everything else, though, it felt too surface-level and didn’t feel explored deeply enough to make any kind of point or observation.

Jackson keeps you on your toes about whether or not it is a supernatural event taking place in Marigold’s house, but, regardless, there is clearly something happening, and it freaks Mari out so much she doesn’t sleep and obsesses over getting high to chillax. But yet her internal monologue the day after she’s watched a door slowly open by itself or witnesses a hand trying to open the shower curtain (moments that left her FREAKED at the time) does not line up. She’s like, oh whatever! It’s all fine! Jackson tries to make me believe that she has fallen sleep every time she’s watched a scary movie with her brother and apparently has then never heard of any horror tropes, but I don’t buy it, not when it feels like Mari is supposed to live in today’s world.

Also, side-note: they have a dog, and I just want to tell you now: the dog survives. #sorrynotsorry for that “spoiler” but anytime there’s a family pet in a horror setting I’m always on edge. It’s a trope I hate.

I don’t want to touch upon this too much since it’s part of the mystery, but Jackson works in a lot of commentary about small towns and their troubled pasts, gentrification, unfair laws, the prison system, and a whole host of things that I wish would’ve been explored more deeply.

Now, look, I am for legalization (get that tax, use it for good) and medical use of marijuana, and even if you want to just be high for funsies, you do you, boo. That does not mean I want to hang out with you while you do it though, because in my personal past experiences, people who are obsessed with pot make it their entire personality and it’s the most boring effing thing in the world to me. So I found myself rolling my eyes at Mari a LOT, and it definitely soured my perception of her (though this is where I felt the mental health support was majorly lacking because she was turning to getting high as a way of coping as her anxiety was still clearly on-going). I appreciated that Jackson wasn’t trying to condemn or promote drug use, but rather explore the real-world reasons one may like or dislike it and let you draw your own conclusions.

Relationship Status: One And Done

Our date started off promising, but as we sipped our lattes and discussed our pasts, I realized there was just something that didn’t fit, and I think you realized it too because you snuck out the back exit and didn’t even say goodbye. Rude, but I’ll get over it. Harmony House by Nic Sheff also touches upon a haunted house, societal issues, and a main character with a drug issue.

If you want something more overtly supernatural, then try out Anna Dressed in Blood by Kendare Blake. And for something a little more MG but no less creepy with excellent story pacing, I still think about Katherine Arden’s Small Spaces series.

FTC Full Disclosure: I received my free review copy from Katherine Tegen Books. I received neither money nor peanut butter cups in exchange for this review. White Smoke is available now.