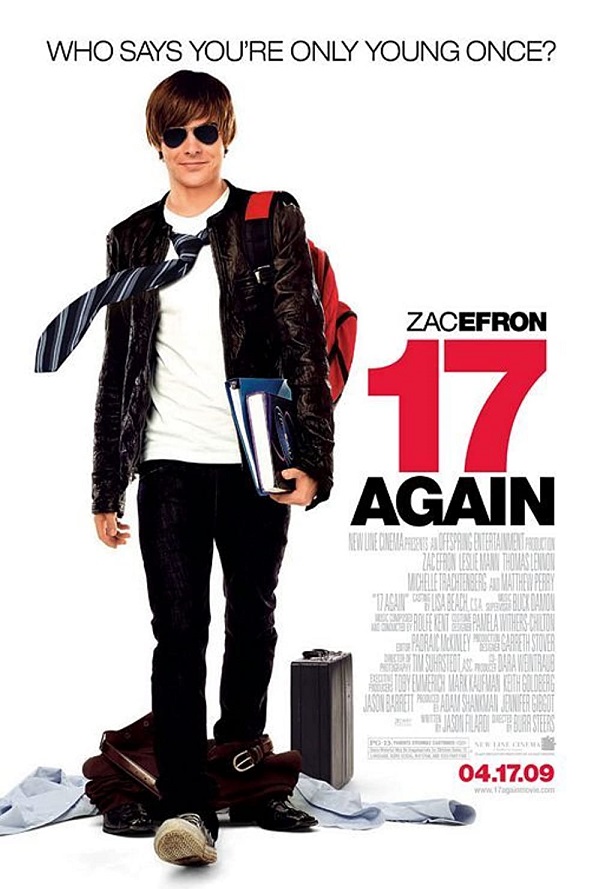 Every time I write a Highly Scientific (term used loosely) Film Analysis, I am almost always writing about what I consider to the best and the most rewatchable movies. This is probably because I haven’t even managed to watch anything outside of my own (considerable) teen movie collection. Which might be because I always want to talk about things that are my favorites, but potentially it also has something to do with the low effort required from walking into the other room and grabbing a DVD I already own. So if you assumed from the title of this post that oh this is a crappy movie starring Zac Efron, this is going to be a slam review, YOU ARE SO DEAD WRONG IT’S NOT EVEN FUNNY. Because Zac is an ethereal angel who blessed us in 2009 with a new spin on what was starting to feel like a forgotten genre.

It’s 1989 and Mike’s future is bright and full of potential – he’s the star of the basketball team, with a shot at going to college on a full sports scholarship. But unfortunately, Mike is dating the worlds biggest asshole, a girl named Scarlett who proceeds to tell him seconds before the most important basketball game of his life, that she’s pregnant. So Mike bails on his important game, to let Scarlett know that he will be there to take care of her and the baby.

18 years later and Mike (Matthew Perry) has what he feels is an unsuccessful career as a pharmaceutical sales rep. Years of resentment for not having been able to go to college and having his potential left unfulfilled have led Mike’s wife Scarlett (Leslie Mann) to separate from him and to his kids Maggie (Michelle Trachtenberg) and Alex disliking him. Mike visits his old high school to reflect on his glory days and runs into a mysterious and wise janitor. Later that night and in the middle of a storm, Mike sees the mysterious janitor jump off of a bridge. Mike tries to rescue him and falls into a strange whirlpool in the river below.

The next morning, Mike discovers he has transformed into his 17-year-old self (Zac Efron). With the aid of his rich and nerdy best friend Ned (Thomas Lennon), Mike enrolls in high school as the new kid Mark. Ned believes Mike has had a “spirit guide transformation” and Mike thinks he must redeem himself by helping out his son and daughter. And just maybe along the way he can save his marriage while he’s at it. (Assuming he can stop his own daughter from trying to jump his hot 17-year-old bones.)

THIS IS THE BEST MOVIE ZAC HAS EVER BEEN IN OR EVER WILL BE IN. I am dead serious. He is just so on in every scene and completely perfect in this role. He’s shockingly funny and sincere. When he turns back into Matthew Perry at the end of the movie…? WORST MOMENT OF MY LIFE. Even if you aren’t awkwardly attracted to Zac like I am, you will find yourself won over by him in this movie.

So, Leslie Mann’s one of those people that isn’t exactly a draw for me, but I’m always happy to see her in whatever I’m watching. Because she’s always reliably funny and good.

Bratty teenager that I want to whack on the side of the head? Michelle has certainly got that archetype down pat.

OOOOOOH MY GAAAAWD, why isn’t Thomas Lennon put in EVERY MOVIE, EVER? This movie is made a MILLION times better by his involvement. Playing the stereotypical “nerd” could have been so trite (especially to snobby nerds such as myself), but he plays it brilliantly. And his constant peacocking and pursuit of “Mark’s” principal made for a great b-plot.

Weirdly enough, Zac Efron and Leslie Mann kiiiind of have some absurdly good chemistry going on. The whole scene where they dance together? And Zac helping her with all the “heavy lifting” (okay, not actually a euphemism) in the back yard? But they do lose some points for the statutory/MILFyness of it all. And the whole separated adult couple getting back together scenario is not nearly as romantic for me as teens falling in love for the first time, evs. So story wise it doesn’t do much for me, but actor-wise, I have to give it fair credit. Leslie and Zac have more chemistry than with anyone else I’ve seen opposite Zac in a movie.

Basically everything that comes out of Thomas Lennon’s mouth is pure gold. For example:

Ned: “Are you now or have you ever been a Norse god, vampire or time-traveling cyborg?”

Mike: “I’ve known you since – what – first grade? I think maybe I would have told you.”

Ned: “I think our hands just made a baby.”

Also, Zac Efron’s comedic timing is remarkably on and this is by far his funniest and most quotable role.

If you were to ask me to name one song from this movie, I’d be hard pressed to come up with anything. Where are the cheesy new release pop hits that are awkwardly out of date by the time the movie releases? Nowhere to be found!

I was already out of college when this movie came out – which means it manages to be a funny and enjoyable teen movie without riding in on the nostalgia factor. And because it was released at a weird time for teen movies (as in the genre has barely existed in the past several years), that means there are still people who haven’t seen this. Which means it can’t be background slumber party fodder, it needs to be the main event. So grab a champ can or two and feel free to discuss your inappropriate attraction to a very young Zac Efron. Because this movie has the potential to be added to your teen movie repertoire.