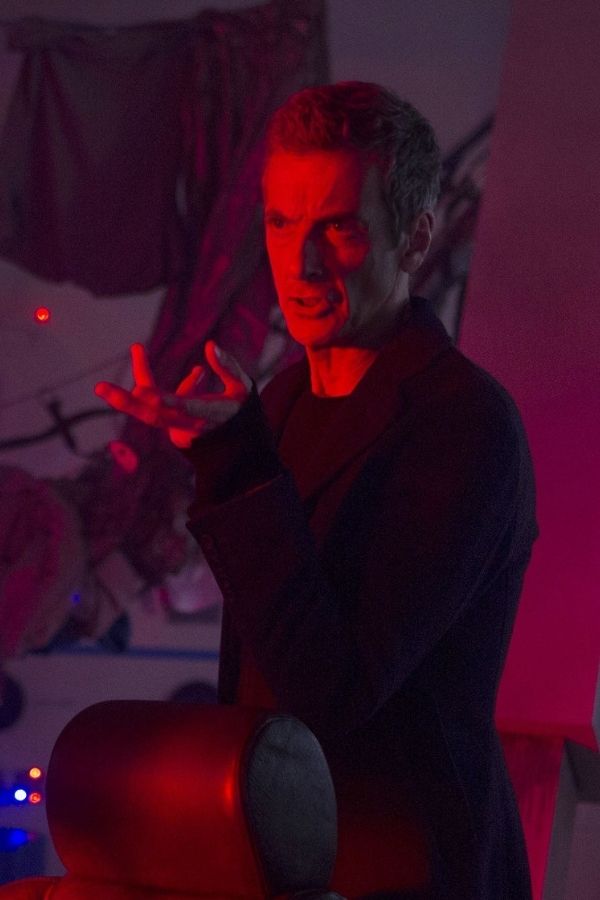 Previously on Doctor Who: The Doctor and Clara meet up with Robin Hood and his merry men … and some evil robot knights.

This weekend, the Doctor examined humanity’s mutual fear of the dark. I really think they should have saved this one for closer to Halloween, don’t you?

This episode opened with the TARDIS floating in space, with its door open and the Doctor sitting on roof. Back inside, he makes a few notes to himself and ponders about why people talk to themselves when they’re alone … And what if they’re not alone after all? He sets down his chalk and when he turns for a moment, the chalk has fallen to the floor. A new note—one he didn’t write—has been written on the chalkboard, a note that reads: “Listen.”

We see Clara at home, leaning with a pained expression on her face. She flashes back to a date with Danny Pink, one that starts out awkward, but gets a little better, but then gets so much worse. She walks about and leaves him sitting in the restaurant, mentally kicking himself.

Clara tries to get into her bedroom but finds the Doctor and the TARDIS inside. He tells her he needs her, and talks to her about what he’d been pondering earlier. He shows her the note on the chalkboard, and then explains that he’s made a hypothesis that everyone, everywhere at some point in their lives experiences the same dream: one in which people think they’ve woken up from a nightmare, and swing their legs over the edge, only to be grabbed around the ankle by something from underneath.

The Doctor asks Clara to connect with the TARDIS so that they can go to the point in Clara’s life when she had the dream. She gets distracted while connected, however, thinking about Danny, and they end up in his childhood instead. Clara goes to talk to little Rupert Pink, who’s afraid of the dark and the space underneath his bed. (Side note: This is why I’m so glad most hotels no longer have open air under their beds.) Clara gets under the bed to show him that there’s nothing there to be afraid of, and while they’re lying underneath, something sits on top.

When they come out from underneath, there’s something underneath Rupert’s blanket. Something awfully quiet. The Doctor is there, too, trying to explain what it could be. He makes Rupert and Clara promise not to look at it, and it leaves. But not before being SUPER CREEPY.

The Doctor takes Clara back to the moment after she left the restaurant on her date, and she tries to make nice with Danny. But she slips, and calls him Rupert, and he gets upset that she’s not being truthful with him, so he leaves. Someone comes into the restaurant in a space/hazmat suit, and she follows them back into the TARDIS, assuming that it’s the Doctor being weird. But when he takes off the helmet, it’s a man who looks a whole lot like Danny, only older.

The Doctor explains that his name is Orson Pink, and he’s a time traveler from a point 100 years or so in Clara’s future. The Doctor found him at the end of the universe, on the “last planet,” where he had been stranded for six months thanks to a time travel accident. They take him back to his ship to get his things, but the Doctor makes excuses to stay one more night.

Orson doesn’t want to stay on his ship for another night, so Clara brings him on board the TARDIS. He drops an army figurine from his belongings, and explains to Clara that it’s a family heirloom and is supposed to be a good luck charm. This army man is one and the same that Clara made little Rupert feel better with, so she begins putting things together about why Orson would have been connected to her timeline. Things get even more clear when he says that time travel runs in his family, and jokingly mentions stories told by one of his great-grandparents.

The Doctor stays in Orson’s ship, and noises start coming from the supposed emptiness outside. He makes Clara go in the TARDIS, shortly before the airlock opens and the Doctor is nearly sucked outside. Orson grabs him in the nick of time, and Clara connects again with the TARDIS to take them elsewhere.

She opens the door and finds that they’ve landed in a barn of some sort. There’s crying coming from a bed close by, which Clara at first assumes is Rupert. As she’s going to check on the boy, the door opens and two adults come into the room. Clara hides under the bed, and overhears the adults talking about how the boy is always afraid … and that he’ll never become a time lord with those issues. (OH, SNAP.) They leave, and the boy hears the Doctor shouting for Clara. He sits on the edge of the bed, and Clara grabs his ankle to keep him in place.

Suddenly, all is clear. Clara convinces the boy to go back to bed, and assures him that although fear might always be with him, it’s OK to be afraid. That fear might be a constant companion (I see what she was doing there), but it’s not a bad one. And that he needs to listen to what she says.

The Doctor and Clara take Orson home, and then Clara back to Danny’s place. She apologizes for the terrible evening, and her complicated nature, and he wonders aloud why he gets so afraid. She says she’ll show him, and then kisses him.

The Doctor finishes the episode looking at the “listen” note on the chalkboard, but he doesn’t seem as worried about it any longer.

This episode came at an oddly fitting time—my husband was away all weekend, and, even though I knew no one was in our apartment when I went to sleep other than myself and our two dogs, I couldn’t fall asleep immediately because all of the (normal) noises of our home were creeping me out. Thankfully, I didn’t watch the episode until he was home, so I could actually sleep last night. All that to say, thinking about a nameless “something” that’s around when you think you’re alone, or reaches out from under the bed when you sit on the edge after having a nightmare is EFFING TERRIFYING.

The resolution of the episode made me think that we’re supposed to understand that all of this is merely in our head, but, if that’s the case … what was under the blanket in Rupert’s room? It certainly didn’t look human when the blanket fell.

We found out this episode that this Doctor isn’t afraid to mess with people a little—I laughed out loud when he asked the night watchman about his coffee and then swiped it. He’s also much more prone to dark, introspective moods. We got a look at another new undershirt; this one was a black T-shirt (I think) that fit the dark mood of the episode nicely. (Also—he wears a wedding ring? Is it from River? I never noticed Eleven wearing one …) Additionally, I think we can assume that we met the Doctor when he was a little, scared boy, which was a surprising moment. Perhaps he was frightened from the time he looked into the void?

Doctor: “Why do you have three mirrors? Why don’t you just turn your head?”

Doctor: “He’s nowhere in this book.”
Rupert: “It’s not a “Where’s Wally” one.”
Doctor: “How do you know? Maybe you haven’t found him yet.”
Rupert: “He’s not in every book.”
Doctor: “Really? Well that’s a few years of my life I’ll be getting back.”

Doctor: “The TARDIS isn’t supposed to come this far, but some idiot turned the safeguards off.”

You might disagree, but I really enjoyed this episode. It was a little freaky, a little funny, and featured more Clara than I typically like, but I think it all wrapped up quite nicely, if not tightly. I think it’s interesting that this Doctor gets so wrapped up in certain thoughts and ideas—he’s much more serious (perhaps overly so?) about situations than Eleven was, and yet flippant at the same time. I like it.

But, what did you think of “Listen”? Do you think everything was all in their heads, or is there something more to it? Did you enjoy the glimpse of the War Doctor (and the quasi-explanation of the barn from the 50th Anniversary)? Let’s discuss in the comments.