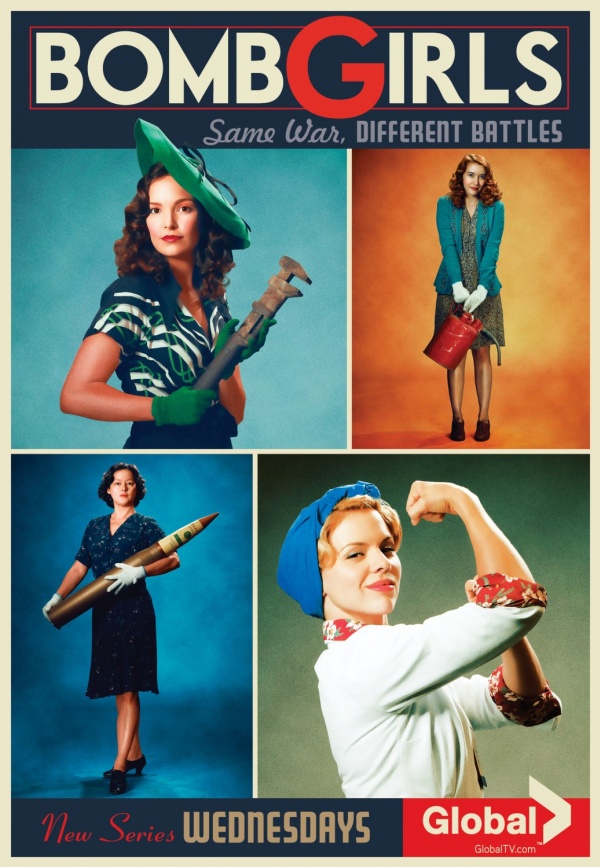 Focusing on a group of women working in a Canadian munitions factory during World War II, this ensemble drama depicts the dangers and new experiences they face. While drawn from diverse backgrounds, the women soon form strong bonds with their peers.

Now that Downton Abbey has gone off the rails and Mad Men is ending, you might have a retro-shaped hole in your television viewing schedule. And Bomb Girls is ready to dive right into it! Set in Canada during World War II, this mini-series turned full series explores the female experience on the homefront with storylines ranging from sudsy to serious. It’s Rosie the Riveter come to life in the form of women from a variety of socioeconomic backgrounds working together in a munitions factory. The show offers a compelling glimpse into the 1940s, tackling both the grim (factory conditions, gender inequality, political tension) and the glamorous (handsome soldiers, vintage fashion, swing dancing).

Thanks to FYA readers Katie S. and Jennie for emailing us about this show. You gals know us too well!

Since this show is filmed in Canada, most of the cast is unfamiliar to me. Maybe you Canadians know different, eh?

The only actor I recognize is Meg Tilly, although I don’t know if it’s because I’ve seen one of her movies (she was nominated for an Oscar!) or because she’s Jennifer Tilly’s sister. Either way, she’s wonderfully understated as Lorna, the factory supervisor and mother hen.

And it really doesn’t matter if you’re familiar with the cast or not, because after 10 minutes into the first episode, you’ll want to be besties with all of the ladies. I mean, just look at these dames!

Gladys is the rich, privileged socialite who actually wants to make a difference.

Betty is tough as nails and always speaks her mind. I’m pretty sure she’s my favorite.

Kate is timid and sheltered, and she’s on the run from her abusive father.

No spoilers, but you will be rooting for Vera SO HARD. Also, she’s adorable.

This show is incredibly addictive, so I recommend blocking out an entire Saturday and inviting some gal pals over for a marathon session. Everyone can wear vintage outfits, pump their fists when something feminist happens (which is often) and throw around the 1940s slang amply provided by the show. (I’ve already started implementing “You’re a peach” and “gruesome twosome” into my everyday vocabulary.) Just make sure you only invite guests who don’t mind if you tear up occasionally.

Recommended Level of Inebriation: The Perfect Opportunity for Themed Cocktails

You don’t want to be wasted while watching this show, but you also don’t want to waste an opportunity to drink delicious 1940s cocktails.

Use of Your Streaming Subscription: Swell!

You might not reach swimfan levels of adoration for Bomb Girls, but you’ll definitely enjoy your time with this show. It’s a juicy journey to the past, and its strong heroines will inspire you to roll up your sleeves and shout, “We can do it!”