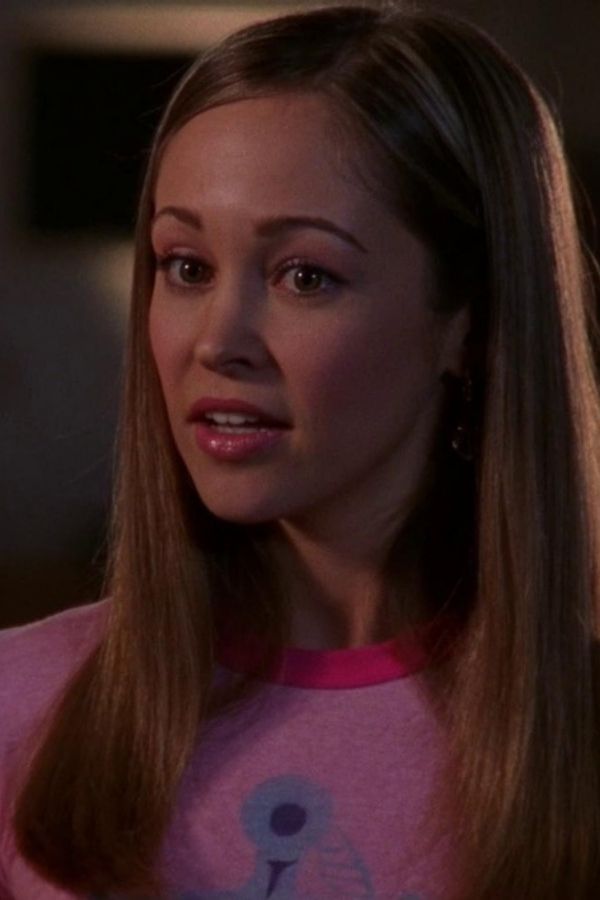 Welcome back to The O.C. Rewatch Project! Last week Britt asked me two questions: 1) how hard was Sandy working those eyebrows last week and 2) how do I feel about Trey’s departure? As for 1) the answer is: the hardest. I hate it when tragedy strikes the Cohen family because I love them, but I like it when tragedy strikes because Peter Gallagher wears tragedy so well. And for 2) I’m with Britt: I’m tired of Trey’s tomfuckery, but I sure am gonna miss Logan Marshall-Green’s gorgeous, broody face. See The Invitation, everyone!

The parents of other Harbor School students want to kick Marissa and Ryan out of school for the Trey shoot-out, and though that seems a bit unfair to Ryan, when everyone starts to enumerate Marissa’s laundry list of drama (Taylor: “skipping school, experimenting with her sexual orientation,” Mean Dean of Discipline: “shoplifting, alcohol abuse, an overdose in Tijuana”), it’s hard to say they’re wrong. (OBVIOUSLY her relationship with Alex shouldn’t be listed among shoplifting and OD-ing, but it is funny to hear all of Marissa’s wacky behavior laid bare at once.)

Oh yeah, who are these people, calling out Marissa? Meet Taylor Townsend, aka my favorite. She’s the new nemesis for our little foursome (SPOILER: and soon to be friend). She’s driven, preppy, ambitious, alarmingly cheerful and possibly evil. I LOVE HER. She’s taking over Marissa’s social chair position, and Summer fights back in honor of Marissa. She plans the kickoff carnival underneath Taylor’s nose – of course it all goes haywire anyway, because nobody just steps out of the way and lets Summer run shit, the way they should.

The Dean of Discipline is a new hire to Harbor School, and he has a hate-on for Marissa and Ryan. His name is Dean Jack Hess and he is evil in a far less enjoyable way than Taylor Townsend. He succeeds in getting Marissa kicked out of school, but not Ryan. But then he strong-arms Marissa out of the kick-off carnival in a way that is DRASTICALLY uncool, so of course Ryan hauls off and punches him, and now he and Marissa can be high school drop-outs together! True love. The only real victim here: poor Summer, whose lovely kick-off carnival was ruined by fisticuffs.

Jimmy’s back to some shady shit, and poor Julie is unawares. He owes some big guy big money, and he doesn’t have any because JIMMY IS THE WORST AT MONEY. And also just the worst, full-stop. He’s all eager for Caleb’s will to be read, and he proposes to Julie with her old ring, and instead of pointing out that this is a VERY cheap thing to do, she accepts, touched. Of course he’s only marrying her for money, because Jimmy gets more terrible and more useless every single time we see him.

Sandy’s falling apart without Kirsten, and the sweet boys are doing their best to help him, cleaning the house and planning a steak night with their pops. But everyone just wants Kirsten home – except stupid Charlotte, who brings Kirsten out of rehab to her lakehouse and guilts Kirsten into staying there with her to help her fight her urge to drink. As soon as Kirsten’s back is turned, however, Charlotte takes a swig out of a flask with an evil smile. Ugh. I hate Jeri Ryan. It’s not her fault; I just hate her. It IS Charlotte’s fault that I hate Charlotte, however, because, like Dean Hess, she is evil in the not-fun way. More Taylor, less of these fools!

RYAN GOT A HAIRCUT. Damn, son! You look good.

Two, actually, and both prove how well he knows the women in his life.

About Kirsten’s ability to keep the house clean without doing any cleaning herself:

About Summer’s ability to overtake the intimidating Taylor as social chair:

Seth: “You have Marissa as a resource – combine that with your natural, God-given rage and you have everything you need.”

About Taylor: “She’s like the Karl Rove of our school.” (Seth is so impressed she knows who Karl Rove is.)

After Ryan punches Dean Hess and mopes his way out of the carnival, we hear Phantom Planet’s slow, acoustic version of The O.C.‘s theme song, “California 2005.”

I love Season 3 Seth. It’s so fun liking him again!

Jimmy tells Julie that maybe Marissa will catch a break and not get kicked out of school, and Julie snorts, “Marissa, catch a break? That’d be a first.”

Taylor Townsend is played by Autumn Reeser, previously known (to me) as Alison on Grounded for Life, and later as Phoebe Valentine on Valentine and Lizzie on Entourage.

Dean Hess is played by Eric Mabius, from The L Word and Ugly Betty – which also starred Alan Dale (Caleb)!

Jimmy’s shady shit is getting even shadier, and he’s awfully squirrely about Caleb’s will, trying to get his grubby paws on that money as soon as possible. Of course, once the will is read, it turns out Caleb was broke, because The O.C. is full of surprises and so was that mean old man. Julie’s surprisingly cool about it, since she thinks Jimmy has money, but Jimmy promptly tries to run away and instead gets his ass handed to him by thugs. And THEN he runs away. Marissa finds him as he’s about to take off on his yacht that now belongs to the bank, and he asks her to tell Julie – ON THEIR WEDDING DAY, NO LESS – that he’s not coming. I hate Jimmy. Marissa just shrugs it off, because how can Jimmy disappoint her at this point, but poor Julie sobs, “What are we going to do?” and I just really, really hate Jimmy.

Taylor Townsend is directing (and re-writing, hah) a production of South Pacific at Harbor School, and Dean Hess bullies Seth and Summer to participate. Taylor Townsend appears to have some weird power over Dean Hess. Food for thought!

All of the adults want Ryan and Marissa to stay away from each other, because they’re obviously awful for each other, but Ryan and Marissa aren’t having it. Before Jimmy’s escape, Julie and Jimmy decide to move the whole family to Hawaii – Julie, because she’s a romantic, Jimmy, because he’s a wimp – and after some back and forth, Ryan and Marissa say goodbye by having sex on the beach in a hut from the school set of South Pacific, arranged by the wonderful Summer and Seth. They finally have sex! And now they don’t even have to say goodbye to each other, so they can keep having sex, if they’d like. At least Jimmy has given them that gift. The gift of more sex.

Kirsten leaves Charlotte’s lakehouse for the will-reading (not for lack of trying on Charlotte’s part), but when Caleb’s attorney hands her a letter from Caleb, it’s too much. She takes off and buys a bottle of vodka and heads straight for a sleazy motel – but she doesn’t drink it! She comes home, for good this time, and everyone is so glad to see her, and it’s a really wonderful reunion for our dear Atwood-Cohens. And of course, when she finally gets up the nerve to read Caleb’s letter, it’s sweet and loving and helps Kirsten heal a little. Charlotte’s still up to some sketchiness, naturally – turns out that lakehouse isn’t even hers, surprise, surprise – and she and Jimmy should really combine purposes because they’re both shadier than a whole fleet of umbrellas.

The worst Jimmy ever

Don’t hate him enough yet? Try taking a look at him wearing this dorky hands-free kit!

Neutral Milk Hotel’s “In the Aeroplane Over the Sea.” I love that song.

That’s it for this week! Britt, I have a question for you: how do you feel about Taylor Townsend? Are you as Team Taylor as I am? And let’s both celebrate the return to sweet, dorky Seth Cohen in Season 3!

Meet Britt here next Wednesday morning as she covers “The Last Waltz” and “The Perfect Storm.”