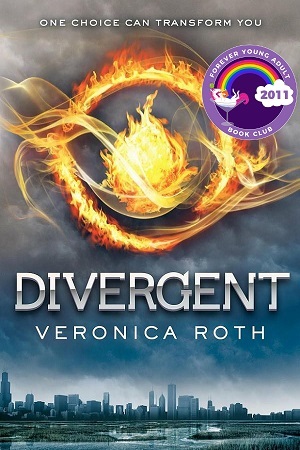 Not bad, but nothing too creative. It took me entirely too long to figure out what that flamey thing was (the faction symbol for Dauntless). People might wonder why your book appears to be on fire, but you won’t have to be too shamefaced reading this one in public.

Beatrice Prior is growing up in Chicago, but not like we know it. Hers is a dystopic, decapitated city, where all of its inhabitants are split into five factions. Beatrice lives with her family in Abnegation, the selfless faction that runs the government. All 16 year olds must take an aptitude test, one which determines which faction they are best suited to. When Beatrice takes her test, she receives two options instead of one (something which is not supposed to happen.) She is informed that result makes her a ‘Divergent’ but is told nothing more than that it is a very dangerous thing she must hide. On the day all the 16 year olds choose their new faction, Beatrice chooses Dauntless, shocking everyone but most of all her family. The Dauntless are brave and dangerous and lead very different lives than those in Abnegation. Does Beatrice have what it takes to make it through the Dauntless initiation process or will she be kicked out, forced to live her life as faction-less? And will Beatrice find out what it means to be Divergent before it’s too late?

Beatrice (or Tris as she calls herself once she joins the Dauntless) would make a (literally!) kick-ass friend. She is willing to make major sacrifices for the people she loves, both friends and family. And while Dauntless doesn’t exactly have the greatest environment for friendship building, she manages to acquire a few loyal and awesome people to associate with. While Tris always considered herself too selfish for Abnegation, she proves herself to be selfless in situations where it counts the most. Plus, if she were your friend, she could beat the shit out of pretty much anyone who wronged you, which is most definitely a bonus!

Wait, WHAT, that is SO HIGH!!! I know, maybe I’m giving this swoon a bit too much inflation, but hear me out. THERE IS SO MUCH FOREPLAY HERE. Not, like, actual foreplay, just a really great build up of little touches, flirting and sexual tension so thick you can cut it with a plastic spork. Tris’ love interest is Four (stupid nickname, but when you find out its origins you will think it’s hawt), who is not only a total MLD (see below) but her instructor. Here is just a taste of what goes down between these two crazy kids:

He gives me a conflicted look and touches his lips to my forehead, right between my eyebrows. I close my eyes. I don’t understand this, whatever it is. But I don’t want to ruin it, so I say nothing. He doesn’t move; he just stays there with his mouth pressed to my skin, and I stay there with my hands on his waist, for a long time.

And then BAM, chapter ends! Ahhh, that just makes me shiver. And makes me rightfully freak out and want more! I’m also giving the swoon such a high score because I sense it has the potential to reach a full ten in later books. Will it happen? I sure hope so. And bonus? NO love triangle!

Roth’s writing is great, nothing too flowery, but flows with the pace you would expect out of a book with this much action. Her dialogue between the characters felt right and Tris’ thoughts were believable. When I remember that the author wrote this book while she was in college, I start to feel more jealous than I would care to admit.

Things we don’t know about Four: his real name, which faction he came from, anything about his past, what his feelings toward Tris are. Pretty much the stuff of classic MLDs. That, and he is deadly handsome and totally dangerous, clearly.

I love dividing people up based on their personalities traits. I do it constantly to everyone I know and occasionally to fictional characters. So I really enjoyed learning more about the different factions of Tris’ world and thinking about where I would belong.

Most of this book reads like an extended training montage. Tris is learning to fight, learning to be fearless and things get pretty ugly in the process. So if you are need a fix of violence a la broken noses and the occasional knife in the eye, look no further.

Relationship Status: Rebound, With the Potential For More

With people saying over and over that this series will be the new Hunger Games, you’ve got yourself a ready made rebound if you’re experiencing Hunger Games (or any YA dystopia) TEABS. And I am left with the positive feeling that this story will keep getting even better as the trilogy continues. So while it may be a rebound for me right now, this book as the potential to become The Next Big Thing in my life. I don’t want to jinx it too soon, but I think I reeeally like this book (like-like.)

FTC Full Disclosure: I received my ARC from Harper Collins. I received neither money nor cocktails for writing this review (dammit!). Divergent is available now!