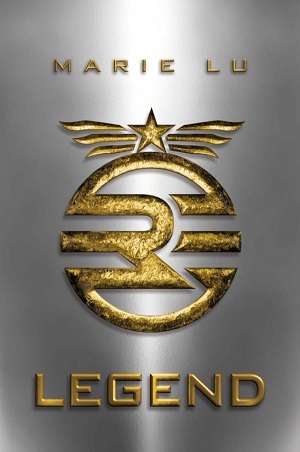 Military stylings with an embossed symbol? I felt totally cool brandishing this book about in public. The cover doesn’t give much away in terms of book content, but what is it about a book in uniform?

Sometime in the future, the Republic of America is at war with the Colonies. June Iparis has been raised in privilege — groomed to become a military leader. She is the fastest, smartest of her age. Except for a criminal who’s topped the Republic’s Most Wanted list: a boy known only as ‘Day’. No one even knows what he looks like, but June follows his exploits with an almost fan-like devotion. What if she could be the one to bring him in?

Then tragedy strikes June’s family, and she is selected for a mission that might make her dreams of catching Day come true. Driven by grief and the need for revenge, June soon sees a side of the Republic she never knew existed.

Oh June, you are totally kick-ass, but seriously, girlfriend, it TOOK you long enough to figure things out! I understand that it can take time for a person to unravel the mysteries of their own life, but seriously? You’re supposed to be the smartest!

Day, Day, Day. You’ve got all the contradictions in your personality that makes my heart flutter: you’ve got a tough persona to cover your heart of gold, you act like everything’s a lark while actually being very serious and protective of your family, and you cover up your vulnerability with sexy swagger. So while I’d totally give you my BFF charm, I’d secretly be crushing on you the whole time.

If I had to write a tagline for the romance in Legend, it would go something like this: Raised to fight as enemies, but can they fight their feelings for each other? And then I’d laugh a lot. But there is something so appealing about a romance between two people where at least one of them knows they shouldn’t be having feelings for each other. That said, some things were done in this book that made me wonder if — even if they could be together — June and Day would be able to forgive each other.

This story is told in alternating chapters between June and Day, which gives the reader fun insight into what each of them were thinking. However, their individual voices weren’t very… individual. The action was so intense, and the stakes so high, though, that the similarity in their voices didn’t ruin the book for me. Lu delivers gut punch after gut punch to her readers, making it one of the better Dystopias I’ve read recently, and left me with a serious case of TEABS. I mean, what happens next? WHAT?!!!

This is totally getting nitpicky, but the only thing I really had a problem with was the fact that both June and Day are supposed to be 15-years old, and there was just NO. WAY. they were only 15. I mean, I know dire circumstances can make people mature faster than normal, but in my mind, I saw them both as 17. At least.

See above for all of the reasons that Day is the quintessential MLD, which made having him as a shared lead in the book a lot of fun. It’s not often we get to see inside the mind of an MLD, so we should appreciate it when we can.

Revolutionaries — whether they intend to be or not — who follow in the footsteps of Robin and his Merry Men are my favorite. Rob the rich to feed the poor? Occupy INDEED!

Obviously we’ve all been there before: a book comes along with a shiny new cover and endless possibilities. It woos us and charms us and before we know it we’re head over heels. That is, of course, before its sequels rip out our hearts or become different books than we thought they were. But does that mean we should give up loving all books? No. No it does not. So you know what? I’m not going to pin any hopes on this book. I’m not going to plan out our future together. I’m just going to enjoy it. Right here. Right now.

FTC Full Disclosure: I received my review copy from Penguin. I received neither money nor cocktails for this review (damnit!). Legend will be available on November 29.