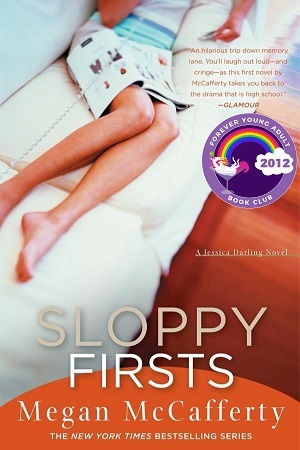 Growing up as a redheaded bookworm, there was no literary character who I idolized more than Anne Shirley. She and I were bosom buddies, kindred spirits, soul twins. She inspired me, she frustrated me (HELLO FALL IN LOVE WITH GILBERT ALREADY) and most of all, she comforted me. Because when she made mistakes, I realized that my flaws were okay. And when she soared, I knew that those great heights were possible for me, too.

I say all of this because, while Carrots will NEVER be replaced, I’ve found the Anne Shirley equivalent for my late teens and early 20s. Obvs those times have passed for me, but when I hang out with Jessica Darling, I feel like I’m right back in the middle of that big ole bundle of excitement and angst known as high school, as well as its older yet ultimately crazier sibling, college.

Like teenage me, Jessica is known as “the smart kid,” but unlike teenage me, she’s also a star runner on the track team and pretty much hates every second of high school, esp. since her best friend, Hope, left town. She can’t stand her supposed friends (known as the Clueless Crew), she hasn’t had a boyfriend since 8th grade, and she can’t wait to get the hell out of Pineville, NJ. Enter Marcus Flutie, a total stoner known as “Krispy Kreme,” who suddenly develops a cryptic interest in Jessica and begins challenging her, socially, intellectually and YES SEXUALLY OMG. This five book series follows Jessica from the middle of her sophomore year all the way to her post-college life in the “real world” and includes all of the angsty trials and mortifying (yet hilarious!) tribulations those defining years entail.

In other words, THIS SHIZZ IS EPIC YOU GUYS.

BFF Charm: HELLS TO THE YES (a.k.a. Platinum)

Well, I think it was pretty obvious when I compared my feelings for Jessica to my adoration for Anne WITH A FREAKING E Shirley. But keep in mind that although my admiration for both is equal, these two ladies could not be more different. I’m gonna go ahead and tell you right now that Jessica is, in the words of a blog friend, an asshole. I mean, she really is. Her own father calls her “Notso” (get it?!), but see THAT’S WHY I LOVE HER. She’s snarky and bitter and grouchy, but she’s also insanely smart and wickedly funny. Plus the books are written in a journal entry style, allowing Jessica to really let loose and TELL IT LIKE IT IS. Here, I’ll let her sell herself with two quotes:

Junior year sure is starting off with a bang. More like a gunshot through the back of the head.

I swear, I would thrive in a communist regime. See, when I have too many choices, it’s my own fault if I make the wrong one. I am much better when decisions have been made for me. It not only gives me the right to complain, but a sense that I’ve had to overcome overwhelming odds in the struggle to become the success that I am.

Now, I hate whiners as much as the next person, but when Jessica complains, shimmering gold coins of hilarity shoot out of her mouth and you want to collect them all because THEY ARE SO PRICELESS.

But lest you think that she’s just a hilarious biotch, please know that Jessica is, deep down, a good person, and as she wrestles with the pains of growing up, there are plenty of times when you just want to give her a hug and say, “I promise, it will get better. Especially because you’re probably the next Tina Fey.”

That’s right. I GAVE THIS SERIES A 10. AND I’VE NEVER DONE THAT BEFORE FOR ANY BOOK, EVEN JELLICOE ROAD, SO YEAH THIS IS A HUGE DEAL. But if there is any book that deserves a perfect swoon score, it’s this series, because it manages to achieve the ULTIMATE trifecta of swoon: hotness, chemistry and uncertainty. And it does all of this over the span of five books! That’s some insane sexual stamina!

The reason for this score is, of course, Marcus Flutie, whom I will examine in greater detail below (HUMINAH!). Just trust me when I say that the electricity between Jessica and Marcus has enough voltage to kill small to medium sized animals, and maybe, by the fifth book, an entire herd of cattle. If romance is a game, then Marcus and Jessica are playing EXTREME SPORTS.

Talky Talk: Straight Up With a Shot of Sass

Some of you may have cringed when you read the words, “The books are written in a journal entry style.” All I can say is, TRUST. Megan McCafferty manages to do what the rest of us only dream of: she has reached Meg Cabot levels of style. I’M SERIOUS. Every single book hums with life and crackles with snappy authenticity, and Jessica’s incredibly compelling voice is joined by a chorus of unique, colorful characters. I should also point out that this is, beyond the shadow of a doubt, the funniest YA book(s) I have EVER READ. EVEN THOUGH I’M USING ALL CAPS I SWEAR I’M NOT EXAGGERATING.

The only exception to the authenticity rule is the voice of Hy, the new girl in school. Her slang is major overkill, but let’s just say she speaks that way for a reason…

MARCUS FLUTIE I LOVE YOU WITH MY ENTIRE BEING AND WISH THAT YOU WEREN’T FICTIONAL SO THAT I COULD SHOW YOU JUST HOW MUCH. And I definitely mean that in a sexual way, which I realize should be embarrassing because hello, he’s not real but SHAME BE DAMNED. YOU ARE A MAGNIFICENT CREATURE AND MUST BE WORSHIPPED.

In summary, Marcus Flutie is the Mr. Darcy of YA. YEAH I JUST WROTE THAT.

P.S. The only area where Ms. McCafferty and I disagree is Marcus’ hair. Cos, see, he starts out with… dreads. I KNOW, I KNOW. Do yourself a favor and pretend like you didn’t read that part. Everything will be smooth (sexy) sailing after that.

Jessica loves to hate on her supposed friends, and I completely understand because IT IS SO FUN TO HATE THEM. The Clueless Crew is composed of Manda, the skank*; Sara, the gossip (“I swear Google goes to Sara for information”); and Bridget, who actually turns out to be pretty great. Sara’s constant abuse of “OMIGOD” and quote fingers never fail to bring on the lolz, and Manda’s hypocritical nature is just, well… it boggles the mind. While I’m thankful that I had real friends whom I actually liked in high school, I have to admit that the Clueless Crew would’ve made my life WAY more entertaining.

*It’s important to note that, as a product of its time, this series is guilty of slut shaming. However, Jessica does get some redemption as the books progress and she matures.

JERSEY SHORE BISHES!!! Even though this show came on after this series ended, I have no doubt that Jessica would enjoy the crap out of these guidos and guidettes (after all, she’s totes into The Real World). Copious pages in Jessica’s journal are devoted to the mockery of her home state, especially during the summer when she’s working on the boardwalk. But, deep down, just like me, she secretly kinda sorta loves it.

GLADDIE!!!! Jessica’s grandmother is OFF THE CHAIN LOONY TUNES, which means you will fall in love with her instantly. She calls Jessica “J.D.”, flirts tirelessly with the entire male population of her nursing home, and coordinates the ribbons on her walker with the color of her outfit each day. She’s also full of incredible wisdom, such as the WWII insight she shares with Jessica after 9/11:

“Tragedy was part of our daily routine. But through it all, I never understood the point of being sad when I could choose to be happy.”

This is a personal one, because I graduated from college in 2001, so the early aughts were a seminal time for me. Plus I’m a sucker for late 90s/early 00s culture, and it’s charmingly embedded in Jessica’s story. Here’s an example taken from a conversation when Jessica tells Bridget and her friend Ashleigh that she wants to apply to Columbia:

“Oh, yeah! And Meadow Soprano got in, so you, like shouldn’t have any trouble.”

“Yeah, that’s exactly why I want to go to Columbia, because the fictional daughter of an HBO mob boss goes there.”

“OH MY GOD! Doesn’t Felicity go there?” she yelped again.

“Duuuuhh,” said Bridget and Ashleigh in unison. “Felicity from Felicity.”

“The TV show Felicity,” I said, not really getting it. “I think she goes to a made-up school…” Ashleigh’s voice trailed off, only to come back three hundred decibels louder than before. “YES!” she screamed. “It’s just like Felicity because you’re following your high-school crush to college just like she followed her high-school crush…”

SEE WHAT I MEAN?

Since most YA takes place in high school, I relish the books that carry over into college. Not only do we have the pleasure of watching Jessica make the transition from high school to college, but BONUS: we get to see her as a post-grad, floundering around in the real world. Yay! And it’s as painful and confusing and heartbreaking and amazing as you know it will be.

Are you KIDDING ME? I just wrote the longest review in the history of time! So it should be abundantly clear that I LOVE THESE BOOKS MORE THAN LIFE ITSELF. Because a life without Jessica Darling and Marcus Flutie is a life not worth living. This series makes my heart sing, my eyes tear up, my lady parts (ahem) and my lungs almost collapse from laughing too hard. The more time we spend together, the more deeply I am charmed and enchanted, and the minute our encounter is over, I want it to start all over again. These books may have given me a fatal case of TEABS, but it’s a sacrifice I’m more than willing to make for my soul mate.

FTC Full Disclosure: I bought these books with my own damn money so I could treasure them forever. I received neither cocktails nor money in exchange for this review.