Caution! This book is deep within the mythology of Tortall and is a prequel for a character in the Wild Magic series. It won’t necessarily ruin anything for you in the future, but you will have a deeper appreciation for this series if you read Pierce’s other works first. Also I will be spoiling some plot points of those other series below, so consider this your warning.

Is the feather being melted into liquid gold through the art of transmutation? Is it being gilded in it like the royalty of Carthak adorns themselves in jewels and baubles? Is this feather just a feather, representing Preet, Arram’s mysterious bird, or actually a quill, representing the magical studies that take place? There’s so many layers—like an onion!

Long before Numair Salmalin was the royal mage to the Tortall throne and husband to my favorite wild magic mage, he was a young boy of ten eleven named Arram Draper, studying magic at the Imperial University of Carthak. When a classroom exercise gone wrong shows that Arram’s potential is far beyond what a young boy should be capable of, the entire course of his life is changed as he’s introduced to his new best friends: Prince Ozorne and Varice Kingsford, two plucky and similarly outcast students who accept him into their group, no questions asked.

Over the next few years, Arram studies with different Masters and tries to hone his gift, all the while surviving puberty and the realization that the world around him is a lot more effed up than he could’ve ever imagined.

Okay, I feel a little weird giving a love charm to a character whose age in the book caps out at 15. But understand that I am future-applying this to the man Arram turns into. It’s here that you can see the start of everything that is great about Numair: his passion and curiosity for the world and all its knowledge, his love of animals (every time he interacted with them I was squealing in my head, just wait until you meet Daine!!), his sense of honor and morality (he’s not-so-much into Carthak’s ideals of slavery and the gladiator ring), his humor, and his loyalty. Obviously Pierce already knows who Arram turns into and has a roadmap she can follow, but she still manages to make it a believable and natural progression.

I’m fighting my urge to be jealous on Daine’s behalf, because it’s not like Arram even know she exists at this point. Varice is one of his best friends and is a good person, so I suppose I can’t begrudge him this youthful romance (and we know who he ultimately ends up with). This book is pretty light on the swoon, though there is set up for potential drama in future books, especially since we know, again, where Varice and Numair end up: on opposite sides of basically everything.

Talky Talk: A Decade In The Making

We have been told of the promise of this series for at least a decade. I was honestly a little stunned to find it in my hands (this must be how those GRRM fans will feel if/when another Game of Thrones book ever comes out). So I cracked that first page with a mix of trepidation, excitement, and a lot of expectations.

And…it wasn’t bad. It wasn’t perfect, but neither was it a letdown. I don’t think I was prepared for it to begin with Arram being so young, so I started off with this realization that the series is going to take its damn time in getting to the parts I was really interested in (Arram breaking bonds with Ozorne and fleeing to Tortall), and it was a struggle to temper that disappointment and get myself invested anyway. The first third of the book feels disjointed, like perhaps this is where Pierce labored with writer’s block with the piece, writing a scene here and there and then setting it down for months at a time only to forget where she left off when she got another surge of inspiration. We spin wildly through the first few years of Arram’s studying, his quickly forged friendships with Ozorne and Varice, and, finally, somewhere before the middle we settle into the actual plot that will push the remainder of the series forward. From that point on I was able to speed through the text with close to my normally high level of interest in a typical Tamora Pierce novel.

I wouldn’t say it’s her best work, nor one that a brand-new reader should pick up (for that they should start with Alanna or Wild Magic), but fans of Tortall shouldn’t feel cheated. I think your level of enjoyment will also depend on how you feel about prequels (I struggle with the necessity of them in all formats, so I may be slightly biased already).

My absolute favorite part of reading this novel was all the shout-outs to past books, or, rather, future moments in the timeline. We’ve already met many of these characters before, so it’s cool to see how they’ve changed (or haven’t). One in particular surprised the heck out of me because I don’t feel like I was aware that this person and Numair knew each other from way back when, but I kind of love it and was there for their friendship. Going through this book just made me want to break out my Wild Magic series for the umpteenth time and review parts with a new eye.

While this series is ostensibly about Arram, it’s also a portrait of how one goes from a privileged-but-sweet lesser prince of the empire to the tyrannical, vindictive mess of a human Emperor Ozorne becomes. Just within this book you can see him starting to choose the path—or, perhaps, being guided towards it—that will lead to his destruction. This little trio values loyalty quite highly, and I’m already anticipating how brutal that breakup scene will be.

I was getting some Harry Potter vibes with all the robes and magic lessons and friend groups of two boys and one girl. I’m not saying Pierce is ripping off HP at all, but, well, a magical boarding school is a magical boarding school. I liked some “lessons” more than others, in particular Arram’s moments with the royal healer, his backstory, and their time combatting the plague (I can’t help it; I love a good disaster/survival story).

Pierce has always populated her world with a diverse number of countries and peoples, and Carthak is an extreme melting pot, being the conquering country that it is. I think as the real world has become more open to discussions on racism and diversity, so has Pierce expanded upon this topic and worked to make her books more inclusive.

A large focus of the story is on Arram’s dawning realization that Carthak can’t be a truly thriving country if it continues to deal in slavery and the exultation of violence (they have a Roman-esque gladiator arena that most of the populace loves to attend). Obviously the slavery itself is a big anti-bonus factor, but I liked that the exploration of this politically charged topic seems to be one of the bigger forces that will drive a wedge between Ozorne and Arram.

If we had just met without any backstory, Book, it would not have been love at first sight. But last week I went to one of those carnival fortune tellers and she told me I’d be meeting someone pretty special, and gave me a glimpse of what our future would hold. That future looks pretty dang awesome, so I’m willing to let you take me on a second date and see where this thing can progress.

I mean…if you haven’t read Wild Magic yet, I’m sorry, because I probably spoiled some things for you above, but what, what, what are you doing? Get thee to a library and begin reading, post haste. 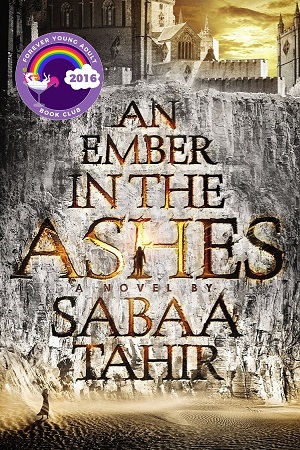 Sabaa Tahir’s Ember in the Ashes plays with similar ideas of loyalty to your people conflicting with your idea of morality, albeit in a much more brutal boarding school setting.

FTC Full Disclosure: I received my free review copy from Random House Books. I received neither money nor peanut butter cups in exchange for this review. Tempests and Slaughter is available now.