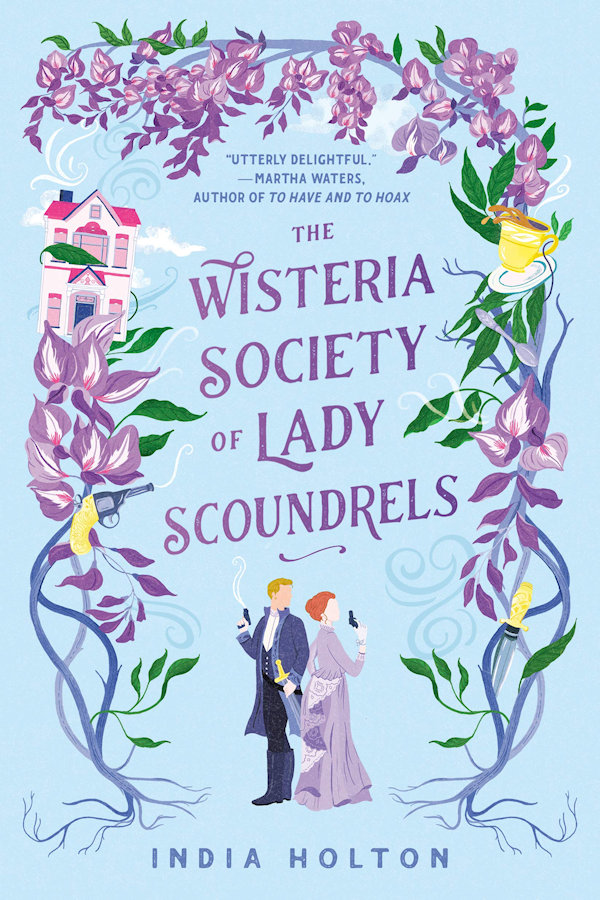 First Impressions: Dagger Under Your Petticoats
What’s Your Type? Rakish pirates, pirates with a heart of gold, tragic backstories, sticky fingers, morally gray characters, whimsy, alternate history, a dash of unexplained magic, women who kick butt and have a healthy fear of the sun
The Lean: Instalove
We Need to Talk: I Do Love A Good Intrigue
Was It Good For You? Humor Is Sexy

First Impressions: Dagger Under Your Petticoats

I’m digging the small details and the eye-pleasing color scheme. It’s bright and fun and a little tricksy (you will probably assume it is a normal historical romance, but you’d be very wrong).

While she’s the supposed heir to Bronte melodrama, Cecilia Bassingwaite would much prefer a quiet cup of tea and a good book to wandering the moors a-wailing. She’s also jonesing for a spot at the big table with all the other lady pirates of the Wisteria Society, but it’s going to take a good assassination or a really big take to prove her mettle.

Ned is a man of many names and faces, though he’s currently wearing the guise of an assassin hired to kill Cecilia.

When Cecilia lays eyes on Ned as he knocks on her front door, she immediately makes him as a rogue pirate turned assassin, and it tickles her pink to realize she’s finally important enough to be targeted for murder. Except the way Ned stares at her, and the comments he makes, well, they tickle her in…other places, too, and that is the kind of thing that she does not have time for, especially not with Captain Morvath running around trying to kidnap her friends and their houses and declaring he will overthrow Queen Victoria so he can subjugate all women.

Cecilia and Ned suffer from some instalove—partly because Ned has some history with Cecilia’s family and partly because Ned is basically the first man Cecilia has really interacted with—but I ended up liking their interactions more in the second half of the book than the first half. Honestly, I just kind of shut my brain off and went with it. This is billed as a romance novel, yes, but, really, the best parts are everything else surrounding the romance.

That said, I did enjoy their back-and-forth bickering, as this book is basically 80% banter:

“But I am concerned for your health, Miss Bassingthwaite . You have come outside without coat or shawl. You might catch a chill. I consider it my duty to warm you with a frisson of fear.”

The sex talk is fairly chaste compared to some modern historical romance novels, but what it lacked in spice it made up in amusement (at least, for me. I’m sure some of you would prefer the dirty bits!):

“It went quicker than I supposed; we should not be missed at all.”

Ned lifted his head, blinking at her through the fall of his hair; he frowned in bemusement. “Er, sweetheart, you do realize we haven’t finished yet?”

“We haven’t?” Her eyes widened.

Ned’s grin returned, even more wicked than before. “We’re not even halfway through.” Taking her hand, he held it against the hard swelling in his trousers. “Do you see?”

Cecilia blushed. His fingers were damp against hers; his eyes were growing dark in the most heart-stirring way. “I did wonder—that is, I wondered if—er, the gentleman’s accoutrement was involved in proceedings—”

Holton’s writing style is unique for sure (more about that below), but I found myself marking up so many pages that made me smile. Her situational humor really worked for me; that juxtaposition of the typical Victorian lady mundanities combined with an unexpected or off-the-wall viewpoint. Some of it is very scene-centric, so I don’t know if these quotes will get you as much as they got me—but I have to share:

Someone else was creeping through the woods with a hesitancy that suggested stealth, although they were trampling fallen branches and leaves with a clumsiness that suggested a desire to be murdered by pirates.

Cecilia is a woman after our own hearts:

“Fair enough.” He sipped tea, trying to regain some equilibrium. “Where did you go? I was a little disconcerted.”

“I needed a book in case of emergencies.”

“No, I mean those moments when nothing important is happening, such as during travel. After supper. Before sleeping. Or whilst one’s opponent reloads their gun.”

“Ah. So you were in the hotel library?”

“Can you believe they don’t have one?”

The Great Peril (as a very pasty person who turns red and never tans, I stand with Miss Darlington on this one):

Tom stumbled back as his sword was jolted from his grip. It landed on Cecilia’s hat, which exploded in a puff of smoke and feathers. Everyone stared at it. “Oh dear,” Constantinopla said after a shocked moment. “What will you do, Cecilia? You’re now exposed to the Great Peril.”

“I’ll protect her from it,” Ned said promptly.

Constantinopla gave him a bewildered look. “From the sun?”

“I— er— Listen, no peril is greater now than Captain Morvath, who will destroy the very foundation of our peaceful civilization if we don’t take quick action!”

“Maybe,” Constantinopla said, “but have you ever tried to get rid of freckles? Not all the lemon juice and bicarbonate in the world is effective.”

We Need To Talk: I Do Love A Good Intrigue

So I was one of those people the cover fooled; I started chapter one assuming this was a more straightforward historical story about women indulging in some light robbery and I quickly got very confused. Why is Miss Darlington so flippant about Ned trying to climb in their window to kill her niece? Their house has a ship’s wheel?! Then I reread the synopsis and a review or two, and realized we were diving headfirst into an alternate, slightly magical history. So, expectations adjusted, I reread the first chapter and found things made a lot more sense.

I mean, as much sense as a group of women who applaud backstabbing and murder attempts while pilfering items, big and small, from their society peers and feel free to land their townhouse or tea cottage on top of another house or the middle of a busy street. Everyone is crafty and sly and secrets abound.

Real talk: this book will not be for everyone. Some people will hate the alternate history/magic aspect. Some are going to really hate the writing style, because it is a very stylized personal preference. Holton’s voice is deeply sarcastic and tongue-in-cheek, and every sentence, every observational moment of humor, is framed in this bemused, drily omniscient slant. Consider all the quotes I’ve included so far and the one below, and if you didn’t feel a frisson of amusement at any of them, then you should probably pass on this book:

“It could be anyone,” Ned added reasonably.

Cecilia arched an eyebrow. “Well then, allow me to consult my possible Darwin heritage instead.” She took the spyglass from a nearby shelf and held it to her eye. The world was a vast black emptiness, echoing like the mordant spaces between soul-wrought words . . .

Ned leaned across and removed the lens cap, and poetry became science again.

Was It Good For You? Humor Is Sexy

Thankfully I was in the exact right mood when I got to this book and I giggled and happily highlighted my way through to the last page. Would I have changed some small things? Sure. I definitely hope the next one is a little less instalove-y, for one. But overall it was a delightful, low-stakes read that I needed during a stressful time.

FTC Full Disclosure: I received my free review copy from Berkley Books. I received neither money nor peanut butter cups in exchange for this review. The Wisteria Society of Lady Scoundrels is available now.