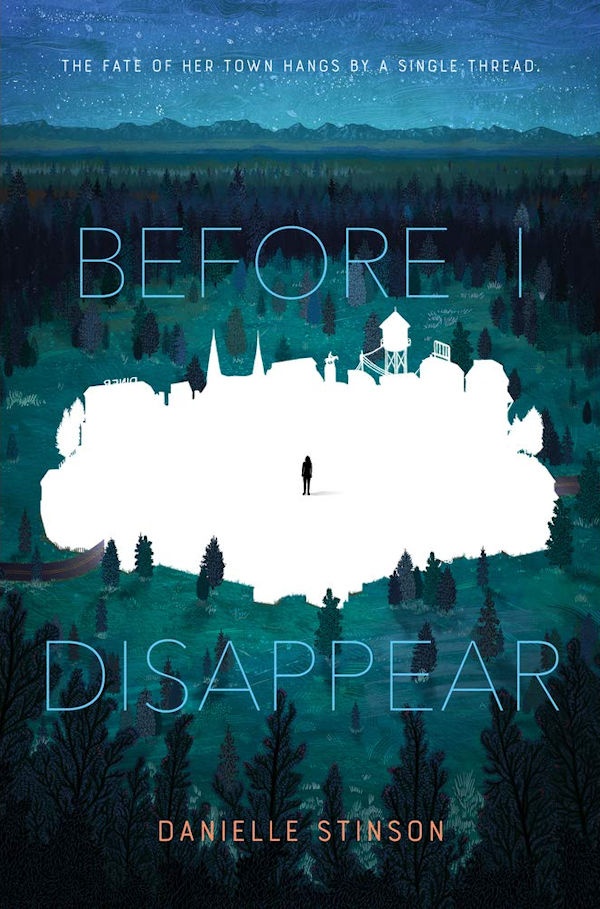 Title: Before I Disappear

The town of Fort Glory literally disappears, so using a Photoshop Object Remover brush to erase the town in the cover is clever. It’s eye-catching in an uncomfortable way, because it makes the image feel wrong/unfinished, which, again, I assume is the point. But because of that feeling, I find myself flipping the book over so I don’t have to look it.

Rose may have a mom, but she’s been the one holding her family together through sheer force of will for years. After her father disappeared and some unfortunate events occurred—best to just leave that bad stuff in the past—her little family has been on the road moving from place to place for years. But what Rose dreams about is four walls and a place for her younger brother, Charlie, to rest: a town where they’ll have neighbors who care about them, and a chance to finally stop running. Fort Glory, Oregon, is the best place they’ve stopped so far. Something about that Pacific Northwest air and the comforting quiet of those giant trees makes Rose feel like this could finally be it.

Except one afternoon a terrifying noise, so deep you can feel it in your bones, splits through the air, causing neighbor to turn against neighbor. Rose races back through the chaos to their trailer park to make sure Charlie and her mom are okay—only she can’t make it. Because the road is gone. The town itself is gone. And all two-thousand-odd people who live there, including Rose’s family…well, they’re all gone too.

Rose is a resourceful survivor and a sensitive soul. She’s been taking care of Charlie for so long that they have this incredible bond, especially because he is a little…different. He a dreamy child who gets bullied easily, and always seems to be hearing things that others can’t. When the town disappears, she goes a bit wild with worry, but I loved that she could take a moment to refocus and think practically. Even though life has been tough on her, Rose is never completely ruthless. She’s got deep-seated hurts and fears and probably judges herself more harshly than anyone else does. All that practice caring for Charlie has made her empathetic to others, which I appreciated, so I would gladly give her my BFF charm.

MLD alert! Early on, Rose notices Ian at the diner and how everyone in town seems to shun him. She learns that he’s gone to jail for murder, which, uh, steer clear, amirite? But when they’re forced to work together, Rose realizes Ian may be more than his reputation. A hot guy with a tragic backstory? Stinson knew exactly what we wanted in our MLD and delivered.

I was not expecting to be so quickly wrapped up in Rose’s story from that very first moment in the Dusty Rose Diner. Kudos to Danielle Stinson for crafting an extremely well-written novel for her debut! Even though the town itself has disappeared for most of the book, the author managed to convey a spooky “small town where something isn’t quite right” vibe with just a few scenes. She balanced the emotional beats with the survival/horror scares in a way that had me up all night wanting to know how it ended. The mystery of why the town was gone isn’t that hard to solve for the observant reader (though took the characters quite a bit longer to figure out) but that wasn’t really the point of the novel, so I didn’t mind. Ultimately it’s a story about forgiveness, acceptance, and the fierce, protective love between siblings. Rose and Charlie also gave me some serious Meg and Charles Wallace vibes, and I loved those two growing up.

Fort Glory’s claim to fame is DARC, the Deep Atomic Research Collider, that’s supposed to rival the Large Hadron Collider in Europe. There was plenty of theoretical physics talk, which is definitely not my forte, but it’s presented in an easy enough way that you won’t feel like it’s going over your head. Yay for more science in YA!

Pretty sure I’d die within a day or two if I was stuck out in the woods by myself. I have no practical outdoorsy survival skills. But I love reading about people facing down the odds to stay alive! Maybe if it ever happens I’ll have picked up SOMETHING by osmosis?

Naturally, Rose meets a few other teens around The Fold in her attempts to rescue Charlie. She starts building connections, and this loner begins to make the friends she so desperately needs. I loved seeing their group dynamic shift and bend as they revealed their secrets.

Relationship Status: Don’t Disappear On Me

I’ve grown quite attached to you, Book. You are just the right balance of danger and excitement that I was looking for. Promise me you’ll stick around—but if you (literally) can’t, then just know: I’d go looking for you if you were in trouble.

FTC Full Disclosure: I received my free review copy from Feiwel Friends. This review was originally posted on Kirkus Reviews in exchange for monetary compensation, which did not affect or influence my opinions. Before I Disappear is available now.