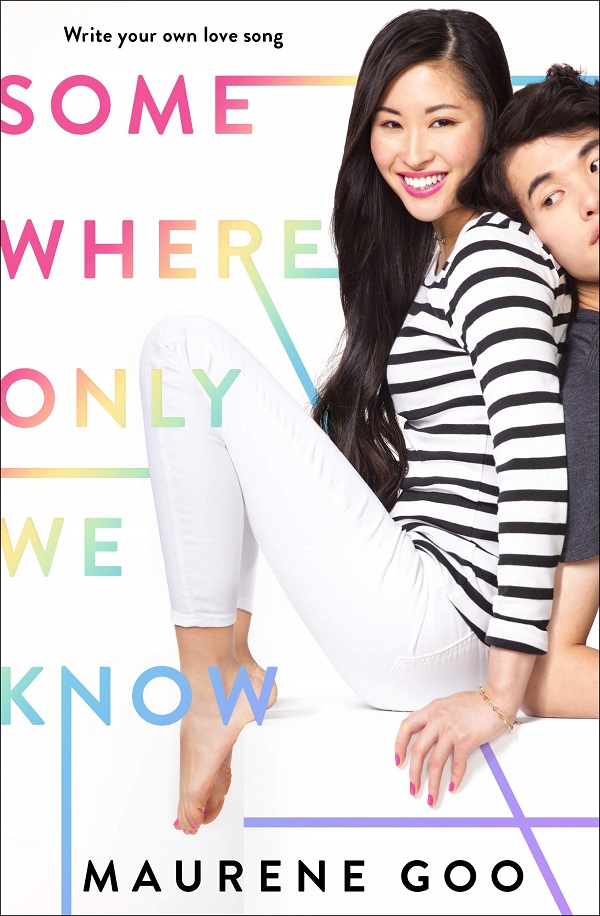 Title: Somewhere Only We Know

Ugh, this cover is SO SO GOOD. Just like on the stage, Lucky is the unequivocal star. Although weirdly, the extended lines make me think of math (maybe it looks like a graph?), which is also ironic since both Lucky and Jack are terrible at it.

On the verge of her American debut, K-Pop sensation Lucky has just wrapped up her concert tour in Hong Kong. But right now, all she wants is to leave her fancy hotel for a tasty hamburger. Which is how she runs into Jack, whose side gig as a tabloid photographer serves as his only creative outlet while he’s working at an internship that he hates.

Despite the alias that she uses, Jack soon realizes who Lucky is, and the opportunity to show the world’s next megastar around the city—and to snap some exclusive photos—is too good to pass up. But what happens when a genuine connection is formed under these false pretenses?

Contrary to what her name might suggest, Lucky didn’t get where she did on a fluke; she works hard. Being under as much pressure as she is, it’s no wonder that she’d want to take a break from it all. But I don’t know whether it’s more foolish or brave to walk around Hong Kong in hotel slippers. I know you’re jonesing for a hamburger, but GIRL.

Given all the sordid behavior of the rich and famous that Jack sees in his line of work, he’s pretty jaded about celebrities and their privacy. (If they’re willing to do it, then they’re willing to get caught—and he’s the one who’ll catch ’em.) But Jack’s mercenary attitude softens the more he gets to know Lucky, and so too did my stance on him. Although he did already have my respect for using the ‘Asian voice’ to use an English speaker’s own assumptions against them.

The attraction between Lucky and Jack is immediate, but they also connect on a deeper level, esp. over their similar upbringing as Korean-Americans from Los Angeles. And neither of these shameless flirts are shy about addressing the sexual tension elephant in the room. Truly, there are few things swoonier than telling someone you like them when you know that they like you back.

This fast-paced novel alternates between Lucky and Jack’s distinct voices. (The reasoning behind the quirky English phrases that Lucky uses is quite great.) The only real quibble I have would be with some of the fictional celebrity references, which are always tricky to get right. Even now, I’m still not over the name of the American talk show on which Lucky is slated to appear, The Later Tonight Show. I know all the good variations already exist, but this ain’t it. Also: Lucky’s fandom should have had a name!

It’s literally the only music I’ve been listening to for months! Granted, my limited understanding of K-Pop is through a group that seems to be an exception to many of the stringent rules in the industry that Lucky is also subjected to, so I’m mostly aware of a real-life example that would contradict her experience. (I realize the difficulty of writing about a pop culture landscape that’s changing so quickly; this story would have been much better suited back when it was first conceived, rather than in a year when no less than twenty K-Pop headliners will be touring the U.S. K-Pop isn’t coming; it’s already here.)

I do wonder how Lucky’s Korean-American perspective would differ from someone from South Korea or another country altogether. And there’s definitely tons of juicy material to mine; some K-Pop idols are still enrolled in regular schools even after they start idol-ing (I desperately need that K-Pop idol school novel to be written). Give me ALLLLLL the K-Pop books!

It’s my first hometown! I don’t actually know the touristy spots that well, nor the expat areas. I am, however, well acquainted with Hong Kong’s favorite pastime that’s prominent throughout Lucky and Jack’s adventures: TASTY BUSINESS. (Seriously, I’m already salivating for all the street food the next time I’m back.)

While the descriptions of Hong Kong ring true for the most part, there was one minor incident that took me completely out of the book. In a euphoric crowd scene, two women announced that they had just gotten married on that day. Like most of Asia, Hong Kong is unfortunately not that progressive yet and same-sex marriage is not legal. The inaccuracy doesn’t matter to the overall story (and I’m all for this LGBTQ-friendlier parallel universe version of HK), but this throwaway detail stood out way more than it was intended to.

It’s my favorite Audrey Hepburn movie ever! The Roman Holiday vibes here are strong and have me hankering for yet another rewatch.

All the ingredients were in place for me to fall head over heels in love with this book—seriously, could it have been more tailor-made for me?!?—and there were times early on when this seemed so close to coming to fruition. It was only when we started to really get to know each other that our long-term incompatibility became evident. But at least we’ll always have Hong Kong.

FTC Full Disclosure: I received my free review copy from Farrar, Straus and Giroux. This review was originally posted on Kirkus Reviews in exchange for monetary compensation, which did not affect or influence my opinions. Somewhere Only We Know is available now.