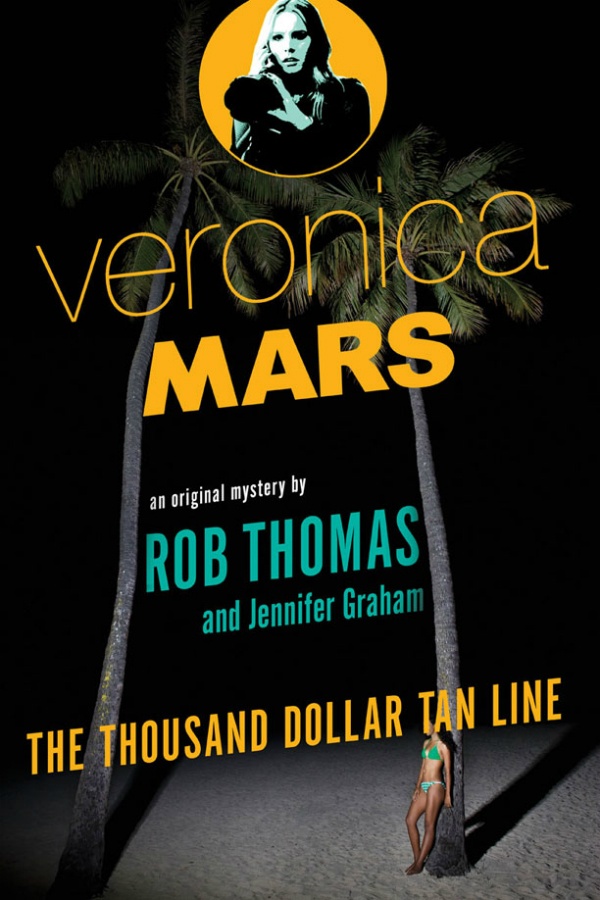 This cover…let’s be honest. It’s not great. It just looks a little low-budg, a little put-together-on-the-fly. Why is the title obscuring the face of the girl in the bikini? Why are the words staggered so haphazardly? It feels like a subway poster for a new CW show, but considering this book is born from a franchise that once lived on The CW, I guess we can forgive it.

The Thousand Dollar Tan Line is intended for those who have seen the Veronica Mars movie. If you are not among that number, this book is not for you. It takes place in the weeks succeeding the events of the film, as Veronica has moved into her father’s office with Mac as her Q. It’s Spring Break in Neptune and tensions are rising. A college girl disappears and Petra Landros (the owner of the Neptune Grand Hotel, who has quite a stake in keeping Neptune’s tourist industry thriving) hires Veronica to find the girl gone wild before there’s a fuss. As Veronica’s on the case, a second girl goes missing – a girl whose step-mother happens to be Lianne Mars! Make that Lianne Scott now, as she’s moved on with a new life and a new family, leaving Veronica to deal with her maternal issues while tracking down a dangerous cartel and a jealous boyfriend.

Do you even have to ask? All I’ve ever wanted in life is to be Veronica’s best friend (actually, I’d love to be part of a bestie foursome between V, Mac and Wallace). She’s fierce, she’s funny, she’s loyal and brave, she solves her friends’ problems for free and I’d love to borrow some of her cute blazers. Plus she’ll make me Snickerdoodles and sneak them into my locker!

I guess the question here is if the Veronica of the book is as friendable as the Veronica of the show and film, and I’m happy to confirm that she absolutely is. Not all of the characters entirely translated to the page, but I could hear Kristen Bell’s voice in every word Veronica spoke or thought.

It’s not that I’m against Logan and Veronica as a concept. I love Piz and I’m sorry that he’s gone, but I can see an adult relationship working out, at least temporarily, between Logan and Veronica, and I’m as susceptible as the next gal to swoony feelings when they’re firing on all cylinders. But Logan spends the entire book in Afghanistan doing his Navy thing, so their communication is purely via Skype. There are still a couple of hot moments, but they spend most of the book missing each other.

The dialogue of the book mostly feels like the Veronica Mars we know and love, and that’s a relief. And her voiceover is just perfect – get a load of this:

Ah, the twin pillars of outrage journalism: slut shaming and victim blaming. Trish Turley liked to call herself a ‘victim’s rights’ advocate, but anytime she could turn an eye on the general decay of society (as witnessed through WASP-colored glasses), she made sure to cover all the bases. The corruption of youth? Check. Amoral decadence? Check. Missing white girl? Yahtzee.

But I really dig how the descriptive passages feel like a Hard Case Crime book, giving a paperback noir tinge to the Neptune we’ve only ever seen, rather than heard described.  I mean, this is as Chandler as it gets:

As if on cue, the door swung open. In walked a woman with chestnut curls flaring out from high cheekbones and a light wool suit tailored to fit her ample curves. Her stiletto heels rang sharply against the floor as she strode forward. She moved with heavy, almost sultry grace. Her dark, velvety eyes made a circuit of the room before finally coming to rest on the couch where Veronica sat.

Sure, the narration can feel a little heavy-handed, but as a noir nerd who’s been devouring detective novels since I was a kid, it was just right.

Bonus Factor: The Gang’s All Here

I just love these guys, and it’s nice to see them again. It’s so much fun to read about Veronica, Mac and Wallace hanging out, drinking beers and eating tacos. That chapter could have been 300 pages and it would have been my favorite book ever. Weevil, Dick, Cliff – everyone gets a moment, and there are more subtle flashbacks to the series than you can possibly imagine, from Cho’s Pizza to Mama Leone’s.

Hey, the book isn’t PG-13. Veronica’s always been something of an iconoclast, so it feels like she should be cussing more than she does on the show. You get plenty of that here.

I didn’t listen to the audiobook, but I definitely will because Kristen Bell reads it! Apparently she does voices and her Cliff McCormack is a trip. MUST HEAR.

Apparently the plot of The Thousand Dollar Tan Line was originally Rob Thomas’ idea for the movie, until he realized it didn’t offer ample opportunity to bring everyone back together. It’s a much better mystery than the one in the film, and it would have made a great screenplay.

Yeah, you read that right – Lianne’s back, and it pains me to say that she’s no less selfish and whiny than she ever was. I just can’t care, you guys. I cannot care.

Veronica does not use her camera ONCE the entire book. I even did a Kindle search for the word “camera” because I was sure I must have missed it. Not. Once.

Relationship Status: I Can’t Quit You

This is Veronica Mars. Whether she’s on a TV show, in a movie or in a book, I will be there. The Thousand Dollar Tan Line feels like a Veronica Mars entity, and that’s the highest compliment I can give it.

FTC Full Disclosure: I purchased my review copy with my own funds. I received neither money nor cocktails for writing this review (dammit!). The Thousand Dollar Tan Line is available now.