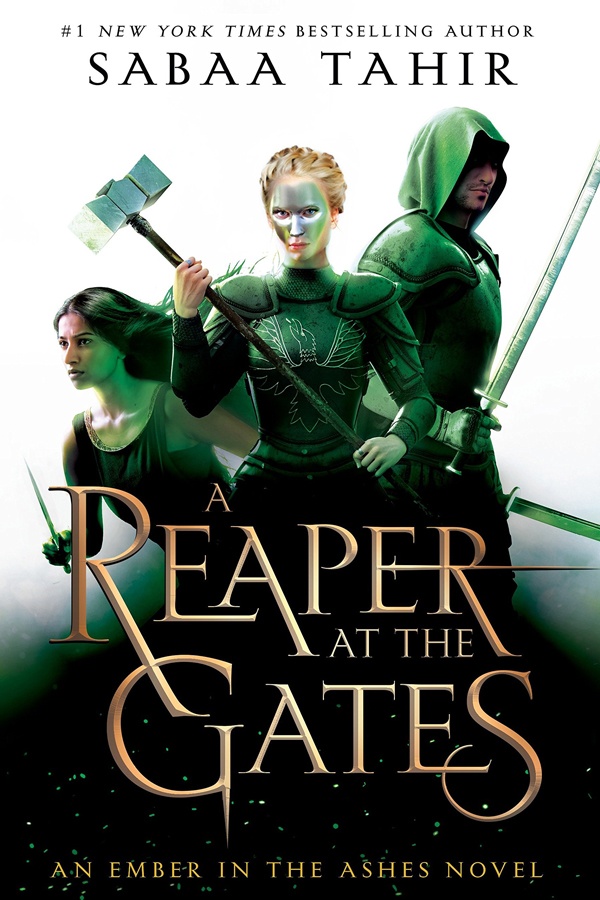 Title: A Reaper at the Gates (An Ember in the Ashes #3)

Published: 2018
Series: An Ember in the Ashes

Hold up, y’all! If you haven’t read the first two books in the Ember in the Ashes series, quit reading this review because there are spoilers in your future. I will refrain, however, from divulging too much about A Reaper at the Gates–though I can’t say the same for the comments section, because once you’ve read this book, you’re gonna wanna TALK.

With the release of this third installment, the publisher did a complete design overhaul, and I gotta say, I’m feelin’ it. Helene looks like the ice queen badass that she is (bonus: her war hammer!); Elias is the proper amount of tall, sexy and broad-shouldered; and Laia appears fierce and determined (though not as curvy as she’s described). Most importantly, we get a good picture of how that whole metal mask on a face thing works.

You may recall that a ton of shizz happened at the end of the previous book: Keenan pulled a total Angel move and turned out to be the Nightbringer, Laila and Elias broke Darin out of prison, Helene’s sister Livia married Marcus (the Emperor) and oh yeah, Elias landed the eternal graveyard shift and is now serving as the Soul Catcher, hanging with ghosts at the Waiting Place.

A Reaper at the Gates begins a few weeks later, with Laia attempting to free imprisoned Scholars and Darin trying to remember how the hell to make Serric steel so they can fight the Empire for real. Elias is training under Shaeva, who considers him a terrible pupil because he keeps leaving all of the time to help Laia. Meanwhile, the Blood Shrike (she will always be Helene to me) is faced with the impossible task of taking down Commandant Keris Veturia–otherwise, Marcus will kill Livia. And, as if there wasn’t enough at stake, the Nightbringer is moving forward with an unfathomable plan to destroy the human race.

I have loved Laia since the beginning, and I’m relieved that, in this installment, she’s able to maintain her wonderfully earnest and compassionate nature while fortifying her backbone with the emotional equivalent of adamantium. I do wish she could forgive herself for that whole Keenan thing because hey, you can’t blame anyone for mistakes when a hot ginger is involved!

As for Helene, girl still scares me a little but we got real close in this third book, and her story more than any other just breaks my heart. She’s caught between the very worst rock (Marcus) and the hardest of hard places (taking down Keris), and as she struggles with self-doubt and guilt, I wanted to start, like, a Blood Shrike Fan Club so she would know how amazing and strong and resilient she is. Obviously, she would hate that, so I simply contented myself with whispering, “You got this, Helene!” at my Kindle.

I can’t even pretend for Laia’s sake that I wanna keep things platonic with Elias. He’s still the gorgeous, brooding yet kind guy we knew in the first two books, but now he’s literally dealing with life and death every single day, and that weight is taking his character to even more complex levels. Gotta say, if I knew this Soul Catcher was waiting for me on the other side, death wouldn’t seem like such a bad thing!

Laia and Elias continue to BURN IT UP, with enough complications to keep things interesting–and incredibly frustrating. Plus there’s a potential new romance in the mix that I am all about (and we can discuss in the comments).

When I finished the last book, I wondered how Sabaa Tahir could possibly fill two more books with this story… because I’m an idiot. She weaves an electrifying plot through the rich fabric of this vibrant and intricate world, and the result is an utterly engrossing journey pulsing with action, intrigue and tragedy. So many reveals! So much blood! Not enough kissing but I’ll let that slide! This nailbiter of a read is the exact opposite of a bridge book (tunnel book?), and if I wasn’t so busy being in awe of Sabaa Tahir’s mesmerizing storytelling, I’d hate her for making me wait for the final installment. ARE WE THERE YET?

I realize this is the most obnoxious Bonus Factor in the world because I can’t even hint about what surprises are in store, and now you’ll just keep second guessing every theory you have but sorry not sorry, there are some masterful reveals in this book and a few jaw-dropper surprises, none of which I saw coming and all of which I obsessed over afterwards.

Now that we’re in the third stage of our relationship, I thought for sure that things would simmer down between this series and me. But A Reaper at the Gates made my heart race and my knees go weak, and our flames of passion show no signs of flickering.

A Reaper at the Gates (An Ember in the Ashes #3)

Haven’t had your fill of relentless action and harrowing violence? Crack open Ashes, the first of Ilsa Bick’s trilogy. Double up on a dose of power struggles, tough broads and sick blades with Markswoman by Rati Mehrotra.

FTC Full Disclosure: I purchased my own copy of this book and received neither cocktails nor money in exchange for this review. A Reaper at the Gates is available now.