Title: By the Book

Cover Story: Cute As A Button

This cover is absolutely adorable! I love it. The cartoon dude has vague early 2000s Justin Timberlake noodle hair, which…I was not picturing as I read the book, but I can look past that.

Mary Porter-Malcom feels greatly out of her depth when she has to go to regular public high school at the start of sophomore year. Her only friend from her private Montessori school has outright rejected her for being too hopeless and old-fashioned, so she’s having a rough day when she encounters three classmates discussing the hottest—and most flirty—senior boy in school, Alex Ritter. Mary warns them of his fickle ways using relevant examples of bad romantic leads from her favorite classic literature novels, of which she can be considered somewhat of a connoisseur. The other girls welcome Mary into their group and use her vast knowledge of literary tropes to create a running list of fictional male archetypes to avoid when looking for dates.

But even though Mary knows intellectually what to want and what to avoid in a potential boyfriend, she keeps running into Alex in different social settings, and their conversations leave her feeling more confused than certain. Is she capable of taking her own advice before she turns out to be just like every other tragic heroine who ruins her life for love?

If Mary strolled into my high school, I’d instantly offer to be her BFF. Granted, as two introverts, we would probably keep having near-misses and never end up talking until the last week of school, but the intent would be there. I’ll let Anton, the costumer for Mary’s older sisters’ play, give us a brief overview of her personality: “You give me life, Mary! So much sass behind that sweet face.” Mary turns sixteen in the novel, so I was worried she was going to read a little young, but the girl is an old soul raised by two Lit professors who march to the beat of their own drum. I knew by Chapter Two that I would find her slightly-out-of-touch observations of the world adorable:

And then a girl with the locker next to mine asked if I had gum. Which I didn’t, but it was exciting to think that I looked like the kind of person who might.

She’s a great mix of naïveté and book-smarts paired with the aforementioned sass (she can’t help herself from stating her thoughts, but unlike some blunter, more…sarcastic YA protagonists—who I do adore, don’t get me wrong—Mary tries to be honest but tactful).

Mary had a run-in with Alex Ritter a few years back when he flirted with her at her sisters’ play and then pretended not to know her later, so she’s certain she knows what kind of person he is. Mary makes it pretty clear to Alex that she doesn’t think he’s good boyfriend material for anyone, which, paired with her unusual turn-of-phrase (and the fact that she’s adorable), of course intrigues him.

I adore a “good girl is attracted to a charming rogue despite herself” trope, and this book took that storyline and ran away with my heart. A cute shy or tongue-tied literary guy can still give me butterflies, but a literary love interest who is confident, friendly, and witty to boot? I’m a puddle. (No one will ever accuse my husband of being a wallflower, so this holds doubly true for me IRL.) Their chemistry and slow-burn attraction was *chef’s kiss*

I sat on this review for a little while because gushing about a book I fell in love with is sometimes so much harder than pinpointing what I disliked in a middling book. But you need to know: By the Book is DELIGHTFUL. It’s everything I wanted in a contemporary that can feel like the real world while still capturing that feel-good “movie magic” sepia-toned kind of “real” life.

I opened my tablet on a lazy, beautiful Saturday morning in my newly christened “reading hammock” (see below for context) and could not stop until I’d read it all. I loved the wholesomeness, the excellent romantic chemistry, well-written secondary characters, and Sellet’s breezy style. Mary’s obsession with the classics and the nods to so many famous stories made it a winner for an English nerd like me. Can someone please tell Netflix this is their next teen rom-com hit?

I loved whenever we spent time with Mary’s parents and her four siblings. They go to smart-people trivia together! They have what the family refers to as a “reading hammock” in the backyard! As an only child with pretty chill parents, any glimpse into a more chaotic but positive home life is always endlessly fascinating, and the Porter-Malcolms are such a loveable bunch. Two of my favorite scenes that used Mary’s family to excellent effect were her hot mess birthday dinner and when Mary talked to both her parents about her romantic concerns (at least, once her father determined her questions weren’t about S-E-X):

Mom patted my hand. “We’ve been meaning to have the Talk with you, but to be honest we assumed we’d have more time. Or that you’d ask one of your sisters,” she added hopefully.
“It’s not about that. I mean, it is, but it’s not.” Could I even form a sentence anymore? I closed my eyes to stop another gush of tears.
Dad bustled into the room, setting a steaming mug on the coffee table in front of me before handing one to Mom. “What did I miss?”
“It is and also isn’t about the kiss,” Mom recapped.

Aren’t they the cutest??

Speaking of family outings, I love me some trivia! I would kill to be a fly on the wall of trivia night at Mung’s (a place that looks exactly like it sounds and serves free water with a touch of apple cider vinegar). Team names vary from Let’s Get Lit! (the Porter-Malcolms’) to Oh, the Humanities! and Bougie Nights.

I’d be remiss if I did not throw a shout-out to Mary’s group of new friends she meets in a very cute and unusual way. I loved their little foursome and how important friendship was to the entire story.

It feels right, Book. We had a lovely courtship and I feel pretty confident in announcing our love to the world. Let’s make it official!

Alex shares some charming Peter vibes from Jenny Han’s classic, To All The Boys I’ve Loved Before.

While Brigid Kemmerer’s Call It What You Want has some darker elements compared to Sellet’s debut, her multi-dimensional characters, plus the excitement I feel whenever I finish one of her books, give me similar vibes. 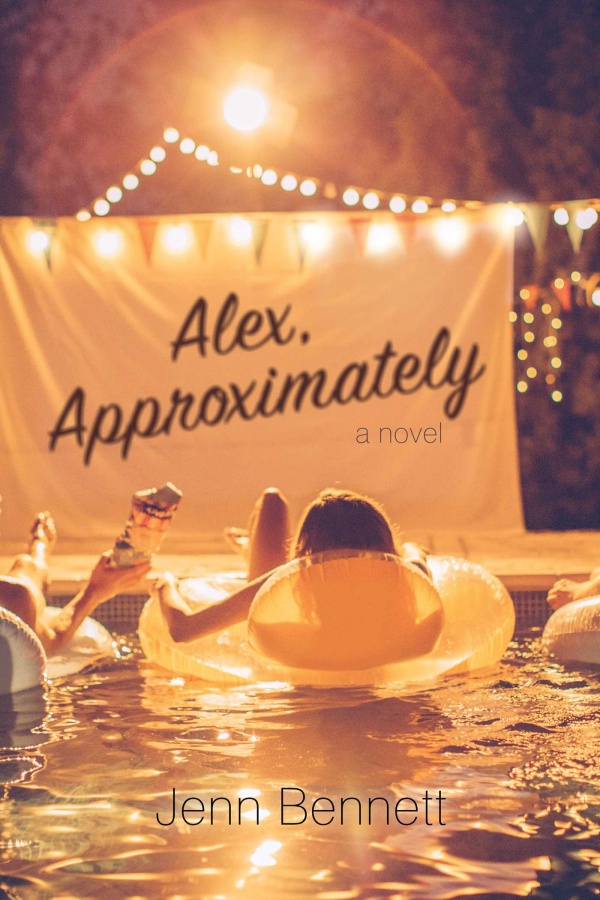 Like By the Book, Jenn Bennett’s Alex, Approximately also had a high swoonworthy score, so if you’ve been on the fence about trying her books, do yourself a favor and get cracking!

FTC Full Disclosure: I received my free review copy from HMH Books. I received neither money nor peanut butter cups in exchange for this review. By the Book is available now.